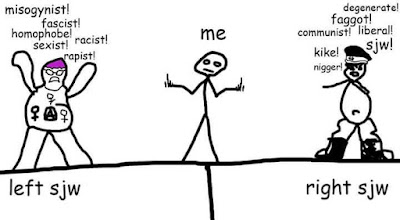 Permissive attitudes towards morally questionable behaviour pave the way for destruction of your culture, people, and society.

The were several good posts written last year which I hoped to comment on. One, in particularly, was by Esoterictrad: It's the Degeneracy Stupid.  It's a well written post which pretty much aligns with this blog's philosophical position.  It also think it's one of the most important posts of the year since it succinctly illustrates the mindware contamination of NRx that has come about through Alt-Right entryism. This has been the most depressing development of 2015 but unfortunately, given the rise of the dissident Right, to be expected.


This seemingly obvious truth is in fact denied by what seems like increasingly large numbers of people who use the term ‘Alt-Right’ to describe themselves. Over the course of the last few years as the ‘Alt-Right’ has grown in popularity it has attracted more and more white men disaffected with how things are going. In such a liberal age many of these men are still largely sit within the Overton Window on many issues, it is only on a few where they have directly experienced the horrors of modernity that they branch out and explore.


Some of those men end up going further and head towards Truth, but the vast majority are more likely to end up making a truce towards the rest of the liberal attitudes. The Reddit subreddit “The Red Pill” which is a Game/sexual strategy forum explicitly forbids discussion of morality. There is a mod post announcing people must keep their morals to themselves.

As Esoterictrad points out, there seems to be this notion that everything will be OK if you fix up an isolated act of degeneracy whilst wallowing in an ocean of it. Let me illustrate what I mean. For years I struggled to understand why fornication was wrong. Why should God be so opposed to the private act of affection between two consenting adults, especially if no harm was done by it? It's taken me years to realise my formulation of the question was based upon a failure to understand the "extrapersonal" dimension of the sexual act. Sex is not simply an act that can be isolated to two people, but its an act with much wider sociological implications. Compartmentalising it is simply a poor way of thinking about it.

Family stability is partly a function of the prevailing sexual mores.  Acceptable promiscuity facilitates family dissolution, it facilitates abortion, it facilitates the alpha harem and alpha widowhood with the subsequent negative effects of long term pair bonding. It disincentivises socially productive beta behaviour and promotes the dark triad of traits which undermine society. It moves the locus of control of sexuality towards the female instead of the male, undermining the intended sexual dynamic between sexes. Fornication, considered from a simply personal perspective, is probably not that bad, but when considered from a global one, it is a lethal poison. Getting people to grasp the global picture is very hard. Telling people to keep "your morals to yourself" keeps the focus on the local and not the global.

People seem to have a real problem grasping the "big picture" and instead focus on small issues all the will oblivious the larger problem which brings us to the Alt-Right. Esoterictrad on the subject:


The other area where people might run into the obvious lies of the left establishment is of course demographics and race. A great many people ‘wake up’ to the reality of race but never ‘wake up’ to anything else. They are essentially what should be known as the ‘Alt-Left’ – where everything is acceptable as long as it is a whites only society. Homosexuals of course have greatly appreciated this, because it means they do not have to face up to their sins. Here is a group of people willing to accept them because they shout about Niggers and Kikes just like them, but won’t actually suggest they change their behaviour.

Bingo. These people simply can't grasp the fact that a whites only society can also implode. They're so focused on "white oppression" that they miss the bigger picture. They're essentially social justice warriors for white people only. I would urge my readers to have a look a Richard Spencer's Political Theology and tell me how his "myths" differ from the "myths' of social justice warriors.  The common thread of both parties is a believe in the power of myth over truth; oppression by whites in the case of the Left SJW's and oppression by others in the case of the Right SJW's both parties are ambivalent when it comes to the matter of truth. Indeed, as Spencer so eloquently points out.


Indeed, knowing too much truth can be a problem.

The reason why the West is in such deep shit is because it doesn't realise just how bad things are.  It doesn't help that people are openly advocating closing their eyes to the facts. Commentators are worrying about the position of the deck chairs, ignoring the hole in the Titanic's side.  No one sees the bigger picture. The problem is one of faith and morals. In other words, it's the degeneracy, stupid.

Posted by The Social Pathologist at 11:08 am 15 comments: