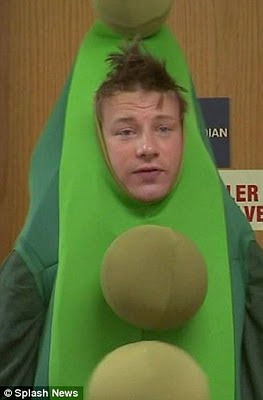 I'm no foodie. Unlike many hipsters and gourmets I find excessive fussiness in food off putting. On the other hand, I find most junk food revolting. It's not that I have anything against junk food, it's just it tastes bad and that with a little bit of effort, home cooking clearly surpasses it in flavour. That doesn't mean that I don't eat junk. If I'm running late or its been a psychologically exhausting day I'll order some takeaway or gets something from Mc Donalds.

I think the whole "healthy eating" thing is a bit overblown, the worst fanatics approach a meal like an industrial chemist, analysing it for its chemical composition. I like to enjoy my food, watch my portions and have the occasional indiscretion. As they say, everything in moderation.

With that in mind, I'd like to say that I'm a great fan of Jamie Oliver. I find his whole approach to food appealing. He's not to fussy, his flavours are great and most of his recipes can be fit into a busy family schedule.  He seems cognisant that most families are time pressured and food has to taste in a way that appeals to the whole family. I have nearly all his books and my kids by and large like his meals.

I applaud his school dinners project and its been a fascinating to see what the public response to it has been. Conservative commentators should study the phenomena as it exposes what I think are the weak spots in the modern conceptions of democracy and mainstream conservatisms lauding of the "common man"

For those who are unaware, the Oliver initiated the  school dinners program after witnessing first hand the appalling "junk" that British kids were fed at school. His aim was to improve the nutrition of kids at school (and help the fight against obesity) by offering more healthy and flavoursome choices. Oliver was not attempting to force some weird vegan diet on the children, "look kids dried soy, yummy", rather he wanted them to stop eating rubbish continuously. Given what we know about nutrition you would imagine that he would be lauded for his efforts. Not so.

If you imagine that the prole class are just like you and I only just a bit poorer , you're sadly mistaken.

While he was given lots of support by government officials and the media, he was reviled by the people he was intending to help. In fact his school dinners program has failed  in the U.K. and he was pilloried in the U.S. His harshest critics being the proles and the libertarians.

Even if you don't agree with what Oliver serves up, you've got to agree that it is better than most of the rubbish that children are fed at school. So why is he on the receiving end of so much heat? Why are the very people he is trying to help his harshest critics?

The modern American democratic model, the model upon which most of the modern Western states are based on, is premised on the assumption that the choice that the public makes is inherently good.  Yet how legitimate is a democracy when it starts to make objectively bad decisions? Most of my middle class friends stared in horror at the Jamie Oliver episodes, aghast at the pig ignorance of the parents and children who demanded it as their "right", to eat whatever they wanted and not to be coerced into eating reasonably healthy food. How can people be so stupid? How is it that they want to fight for the right to destroy themselves?

Many conservative commentators believe that the "elites" are responsible for the mess that the West is in at the moment. They fail to see the elephant in the room. The West is rotting from the top and the bottom.

An insistence on totally free market economics and the legitimacy of consumer choice in a moral vacuum results in a market that reflects the value of the lowest common denominator. The dumbing and coarsening down of mainstream culture is not a product of elite conspiracy, more an end result of proletarian demand in capitalistic culture.  Jamie's school dinners project is not failing because of elite conspiracy, it's because the proles won't eat his food. They prefer to pay for Mc Donalds. Pearls before swine.
Posted by The Social Pathologist at 10:00 pm 8 comments: