Modern passenger car engines, such as this one, are conservatively designed.  Their components are not stressed to their limits in order to preserve engine life and reliability. The fact that components are not pushed to their limits gives after-market component manufactures the opportuinty to exploit this phenomena to change the parameters of the engine operation. By reprogramming the engine's computer management system, frequently large boosts in power can be achieved. 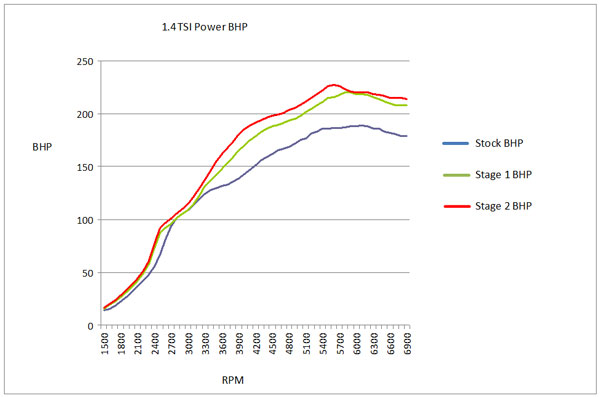 An engine that has been "chipped" usually has it warranty voided. As the "boosting" of the engine usually comes at the expense of engine life and reliability.

A primitive form of "chipping" was used during  WW2.  Some military aircraft had War Emergency Power setting. This setting pushed the engine beyond its intended design parameters with the following results;


In normal service, the P-51H Mustang was rated at 1,380 hp, but WEP would deliver up to 2,218 hp.[3] The Vought F4U Corsair, not originally equipped for WEP, later boasted a power increase of up to 410 hp (17%) when WEP was engaged.[2] ............. All WEP methods result in greater-than-usual stresses on the engine, and correspond to a reduced engine lifetime. For some airplanes, such as the P-51, use of WEP required the plane to be grounded after landing and the engine torn down and inspected for damage before returning to the air. (My italics)

The point about all this is that engines are mulitparametric systems and stability and long life expectancy is achieved by designing the engine within conservative parameters. The inbuilt "margin of saftey" in component design can allow at times for quite significant excursions from the usual design parameters but come at the expensive of system life and integrity.

Now human society can be considered a multi-parametric system that only maintains its long term cohesion as long as its constituent parts operate within conservative limits. The conservative limits can be pushed for a time, and given the large degree of "conservatism"in the system, can appear "apparently stable", much like an engine that's been chipped.  With the same consequences: the engine breaks down suddenly and without warning.

The intrinsic problem with systems with a large degree of component redundancy is that fatal changes in system operating parameters can occur and initially appear quite innocuous and beneficial, their true malignancy being manifest sometime later on.  Intelligent men who understand the system will try to take corrective measures to restore it to its initial state. But to the man possessed of a short time horizon or inability to extrapolate in the future(most of humanity), the "boost in system power" is without consequence as he cannot see that the "engine" is rapidly wearing away. Likewise many social changes are accepted by the bovine masses because they are pleasant and unable to see how they can be harmful in any way. When the critics of the social changes point out that the system is going to fail, they look around them and see everything working perfectly and dismiss them. Until it doesn't
Posted by The Social Pathologist at 11:33 pm 12 comments: