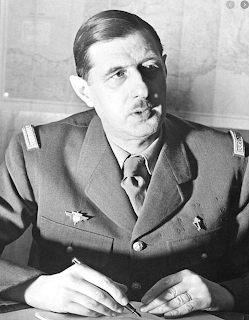 The one thing that did worry some members of the Free French were de Gaulle's bouts of Anglophobia. Larminat and Eboue wrote in September 1941 to warn him against those who "in order to pay court to you or just out of stupidity feel it necessary constantly to denigrate the English. One ends up asking oneself who we are fighting the war against." But this gradually ceased to be to be an issue partly because the force of de Gaulle's personality succeeded in imposing his way of seeing the world on his followers and partly because objective circumstances had given some credence to de Gaulle's suspicions[ED]. Passy, who had started out with few of these prejudices, found himself battling constantly against the British secret services; and even the most Anglophile Free French were shocked by the Madagascar landings.

I think that this passage from Jackson's book in some ways highlights the his lack of objectivity when it comes to de Gaulle and it's typical of the approach he uses throughout the book. Through the use of both emphasis and understatement, Jackson tends to highlight de Gaulle's faults and downplay the less than honorable actions by the British. On one hand, we are told by Jackson that de Gaulle was a dour personality without significant charisma but on the other hand we find him able to his impose his world view upon the quarrelsome French through the force of his personality.  The claim is contradictory.  The reality of the situation was that while men respected de Gaulle for his moral position, his officious personality pushed many away and what pushed men into accepting his world view was primarily his moral example and secondly it was the actions of the British and Americans, which shocked even the most anglophile of the French and vindicated him.

One of the things that English and American authors tend to constantly emphasise de Gaulle's legendary  prejudice against the "Anglo-Saxons", painting it as if it were some kind of irrational prejudice without any basis. But one thing that never gets asked is, was his hostility justified.  A little digging around the history of time will show that De Gaulle's had quite a bit of justification for his "anglophobia".

Charles de Gaulle's position in England after the Fall of France is in many ways like that of man, married to a beautiful wife, who is suddenly destitute and without lodgings.  Gratefully accepting the offer of accommodation by his next door neighbour, he moves in and is horrified to find that his neighbour is soon making advances on his wife. Every time he complains or puts up a fight, he is reminded of just how ungrateful he is for his neighbour's generosity and that his suspicions of him are completely unjustified. A lot of de Gaulle's "disagreeableness" with the English, especially in the early to mid stages of the war, are easily understood by taking this perspective.

After the fiasco at Dakar, the British attitude to him changed.  Firstly, because he was delivering so little in the way of rallying the French to the allied cause and secondly because he was pushing France's interests in a way that was not congenial to British. Secondly, the British attitude to France changed, seeing it less as a victim and more as a opportunistic collaborator. So the British started looking for other options. Their general attitude seemed to be to find someone else rather than De Gaulle to represent the French. Firstly, they started courting other Free French Leaders in an effort to undermine him, courting Muselier and Catroux. They made contact with Vichy military leaders Darlan, Giraud  and Weygand offering to deal with them instead of De Gaulle, by passing the Free French.

Furthermore there were also territorial considerations.

Vichy Syria was part of the French Mandate and was proving to be rather friendly to the Germans.  De Gaulle had lobbied for a joint British-French force to invade it and prevent it from giving the Germans material assistance.  De Gaulle had both patriotic and pragmatic reasons. He wanted the traitorous Vichy replaced but was also desperate to have Free French score some "runs on the board". The British agreed but for other reasons.

The British were also keen to invade the region but not for the same reasons as the French. British Cabinet documents reveal that they were eager to increase their influence in the Arab world, and their plan was to push the French out of Syria by agitating for local native independence. (Note: At the same time native independence movements in British held territories were suppressed). The British plan was to invade the area with the aim of "liberating" it, and forcing a referendum on independence.  The French would be given civilian control but the British military would have final say on events. Effectively there would be a transfer of power from the French to the British. The involvement of the Free French would politically "sanitize" the plan.

Cabinet documents reveal that de Gaulle was to be kept in the dark and deliberately misled. Furthermore, in order to be "kept on the leash" he wouldn't have a chance to recruit from the newly captured Vichy soldiers to change sides. The British wanted de Gaulle militarily weak and dependent on them, incapable of independent action. Five minutes of searching the internet can verify these claims. Jackson, in a book that goes into considerable detail seems to deliberately gloss over this. Which is odd because Anglo-Free French relations rapidly declined after this.

The Armistice of St Jean d'Acre screwed over betrayed the Free French. Given his weakened position, de Gaulle's only response to throw a political tantrum. De Gaulle raged against the British and managed to secure some concessions, which the British reneged on later. But his rage and tactics so angered Churchill that he was prepared to be rid of him and actually advocated it to cabinet and parliament. He was denied access to BBC, not allowed to leave the country, had his means of communication to the outside world limited and was shadowed by the British security apparatus.

However, what saved De Gaulle at this moment was that an opposition movement in France was beginning to solidify around him, the number of recruits were beginning to increase and the Free French in London recognised him as their only leader. As one of the men who rallied to him said:

General de Gaulle symbolizes that France which did not despair, which did not give in. He alone acted. At a moment when people feel that force of character is the essential quality for a leader, the name of General de Gaulle exerts on the French a political attraction which perhaps London is not aware of ... France needs a myth, and for the moment France has fallen so low that this myth cannot be found in a formula or an idea: it needs to be incarnated in a man. Whatever the person of de Gaulle may be . . . if France is to remake herself again it can only be around the 'de Gaulle myth'.'

Perhaps more important for his own survival was the fact that he enjoyed high esteem among the Anglo-Saxon peoples--if not their politicians--who admired his moral position and he enjoyed an enormous amount of popularity. De Gaulle was beginning to have some political clout and military use as a rallying point for the Resistance. In most biographies of de Gaulle, there is a strong emphasis of his political role, but what's missed is that his "intransigent nature" stemmed in a large degree from a deep moral and religious dimension which in many ways helps understand the man. It's something I want to do deeper analysisin later posts later. But whats really fascinating is that it was this aspect of him that ultimately gave him the critical political support that ensured his survival. Churchill, no matter how much this "fly in the ointment" pained him, couldn't get rid of him. The political costs were became too high. (Though he came close to doing so on several occasions.)

That, of course didn't stop the British from pursuing their interests at the cost of their ally.

They invaded Madagascar (French Territory) excluding the Free French.  The Free French were so demoralised them that they wondered if there was any point for their existence, if their allies didn't bother to take notice of them. De Gaulle only found out about it when rang by the Press. The British then invaded North Africa (French Territory) without his--or the Free French involvement--but in this instance they were not solely to blame because the Roosevelt administration, preferring Vichy to the Free French,  insisted on him not being informed. As they did with the planning for the Normandy landings.

Now, De Gaulle is frequently charged with anglophobia but I think this brief--and not exhaustive---recounting of events--and there's a lot more that the British did that I've not included-- gives him a fair amount of justification for his attitude. Indeed, from a moral perspective, the British have quite a bit to be embarrassed about. The attitude of the British was that the Free French were more an asset than an ally with which they were free to do as they pleased. De Gaulle made that assest unreliable and this was problematic. As a man who stood side by side with them in their "darkest hour" the British did treat him, and the Free French he represented, very shabbily.

In many ways the relationship between De Gaulle and Churchill is fascinating. Churchill, in my opinion, had an underlying decency that was frequently overridden by practical considerations. De Gaulle on the other hand was a man of principle who could be ruthless in its application. I particularly can't seem to work out why De Gaulle was so benevolent to Churchill after the war, given his history with him. Both men were patriots of their countries and both men pursued their respective interests but I can't help the feeling that de Gaulle was the more honorable of the two.

Especially since I can't find any instance where the Free French acted in any manner analogous to the British when they clearly had the opportunity to do so.

***However , an important qualifier: De Gaulle was an "identitarian" in the sense that nationalities have unique identities and while he clearly preferred the French, he had a great admiration for the British people if not its government, So when he criticises the Anglo-Saxons, he is criticising their government and not the people.