De Gaulle and the Idenity of Europe 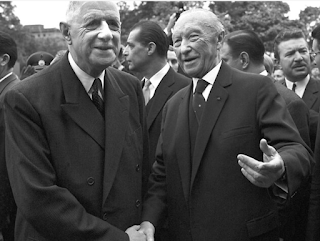 One of the reasons why I'm currently writing about Charles de Gaulle is because I feel that he has been unfairly maligned in the Anglosphere. Seen as an "Anglophobe" it's quite easy to dismiss the man as just another arrogant and notable Frenchman who happened to achieve his mark in history and leave it there. But what's apparent when you study his life and influences in a bit more depth, is that what the man was trying to do was realise a certain vision, primarily with respect to France and--Europe--that philosophically opposed to many of the currents of modernity. Quite simply, de Gaulle was deep.... really deep.  I really didn't realise how deep he was, and what he was putting forward, until I started drilling down into some of his philosophical influences and ideas.  I think the dissident Right needs to give him another look. Particularly the Christian Right.

In another post, I want to talk about the philosophical underpinnings of De Gaulle's weltanschauung but what I would to put forward to my readers is the notion of de Gaulle as a "Christian anti-Buddhist".  De Gaulle strongly believed in the notion of identity and the sense of needing to protect it. What he saw with the modernisation of the world was the homogenisation of society with the concurrent loss of identity that accompanied it. Paradoxically, with the growing "official" multiculturalism he recognised that the world was becoming less diverse.

The economic forces of modernity were particularly potent in this regard. While he was oppositional to the British in many instances, he realised that they were less of a threat than the Americans who were far more "modern". Note, it's very important to separate the notion of the U.S. and modernity. The U.S. is not "intrinsically" modern but incidentally so. In his arguments with the British he recognised that Britain was acting for her own interests in a fairly straightforward way and while this may have been a threat for the French in terms of territorial integrity it did not attack the notion of French identity. The US on the other hand was pushing for a modernity--particularly in the post war period-- which would destroy the French identity and its own.

De Gaulle was not a Luddite or a traditionalist, who felt that "turning the clock back" would restore the world to some kind of imagined idyllic existence. He realised that modernity had its benefits but it had to be "tamed" in order to preserve identity. For de Gaulle, the primary means of achieving this came about by encouraging a protected "French" industry and culture even when it did not make "economic sense". De Gaulle accepted the trade-off.

De Gaulle was also awed by the economic power of the U.S. which came with all the associated political ramifications. He recognised  that France could not compete with it by going alone and would be subsumed by it.  Rather it would have to combine with other European nations, in common purpose, to promote a alternative version of modern society.  Only by combining could they form an economic power which could resist the "americanisation" of the their countries.  This is why he ceaselessly pushed for a notion of a Europe des Patries, as it was an economic model which balanced economic necessity with the preservation of national identity, hence his Fouchet Plan.

Or as de Gaulle said himself:

I do not believe that Europe can have any living reality if it does not include France and her Frenchmen, Germany and its Germans, Italy and its Italians, and so forth. Dante, Goethe, Chateaubriand belong to all Europe to the very extent that they were respectively and eminently Italian, German, and French. They would not have served Europe very well if they had been stateless, or if they had thought and written in some type of integrated Esperanto or Volapük.

What's really interesting here is that De Gaulle reached this position through a sense of Christian nationalism. Something that is unheard of today, except in places like Poland or in Orban's sense of Hungary. This Christian nationalism was anti-keanotic in the sense that the nation had a right to live, defend itself, and define how it wishes to exist but it also respected the rights of other nations to do the same. This type of nation did not wish to emulate the suffering Christ but His triumphant transformation. Once again, Chesterton is probably the best English exponent of what de Gaulle was on about.

...It [Christianity] hates that combination of two colours which is the feeble expedient of the philosophers. It hates that evolution of black into white which is tantamount to a dirty grey....

If any one wants a modern proof of all this, let him consider the curious fact that, under Christianity, Europe (while remaining a unity) has broken up into individual nations. Patriotism is a perfect example of this deliberate balancing of one emphasis against another emphasis. The instinct of the [EU] Pagan empire would have said, “You shall all be European Union Roman citizens, and grow alike; let the German grow less slow and reverent; the Frenchmen less experimental and swift.” But the instinct of Christian Europe says, “Let the German remain slow and reverent, that the Frenchman may the more safely be swift and experimental. We will make an equipoise out of these excesses. The absurdity called Germany shall correct the insanity called France.”

De Gaulle is important because he embodied a philosophy of identity which he tried to politically realise. Some of his opposition to the English, and lot of his opposition to the Benelux countries, was primarily to stop the new European Union from becoming anti-identitarian. As a side note, de Gaulle recognised that any supranational tendency of the European Union would be fought by the English people if not their government. He admired the English for that.

What de Gaulle was trying to advocate was that strangest of beasts, a Christian Nationalism. Nationalism gets a bad rap in modern culture and its malignant versions are certainly to be deplored but the version advocated by de Gaulle was based on the deep love on his own nation and the deep love of the others. His was a true multiculturalism.

Ultimately, though, he was defeated.

The causes of his defeat were multifactoral but can be broadly divided into four categories:

Politically: The reality of the military threat posed by the Soviet Union meant that political policy was directed towards the military unification of Europe under a supranational command. NATO was not just a alliance but a supranational coordinating body. This military unification came with all sorts of economic, cultural and economic homogenising forces. Particularly when driven by the U.S.

Culturally: The barbarity and slaughter of the Second World war reawakened a profound pacifist movement within the European peoples, which saw the origin of the Second World War laying primarily in malignant nationalism. Movements which weakened the sense of identity came to cultural prominence. Incidentally, these movements fed and nurtured pacifistic strands of Christianity which worked to transform Christianity and undermine the notion of identity in it as well. Furthermore, their was a rejection of their own sense of identity by the European youth, particularly in the sixties and an idealisation of the Americanization of life. De Gaulle literally  had the cultural rug pulled underneath him.

Economically: The expansion of big business post war, partially facilitated by the formation of the EU, was an effort to increase the material standard of living in Europe. Europe's historical habits of protecting its own national interests meant that its market was very inefficient. This led to the dismantling of many of the protectionist barriers that was a characteristic of pre-War Europe.  The problem is, however, that an "efficient" market is a culturally homogeneous market.   When "wealth" is the primary metric of well being, sovereignty passes from the cultural elite to the economic. And as we've all seen, globalist millionaires don't care much for national sovereignty.

Deliberately: The destruction of the European national identities was not a consequence of chance misfortune, but the result of the deliberate co-option of the European Economic Community from the outset by "grey men", senior public servants,  who thought it a way to wealth and peace.  Their aim was to economically integrate the European markets to such an extent that national interests became subordinate to economic ones, thereby destroying European nationalism.  What's really interesting is that many of the men who pushed for this state of affairs have remained relatively unknown and assumed very quiet lives, outside the spotlight despite the profound effect that their policies have cause. Perhaps the "greatest" of the these men, someone who should be considered as a type of "anti-de Gaulle" and yet was perhaps of the greatest influence in the destruction of the modern nation state:

Posted by The Social Pathologist at 11:23 am 6 comments: