With the unification of Germany under the leadership of Prussia, Bismark set upon a policy of reducing the influence of Catholicism in Germany. The policy, known as Kulturkampf, aimed to set about to place deliberate obstacles in the path of German Catholicism through institutionalised prejudice..  Whether one agrees with his policy or not, the following graphs would seem to suggest that it may have been responsible for Germany's calamities during the 20th Century.

It's hard to speculate as to what the current Germany would have been like if Adolf Hitler had not come to power. WW2 was a disaster for Germany on so many levels.  It's doubtful that Germany would have engaged in a world war if Hitler had not come to power and therefore the forces which gave rise to him are of significant interest. Germany was not committed to militarism, even after years of suffering under the injustice of the Versailles Treaty, but the treaty itself, and the Depression provided an environment in which radicalism could thrive.

This next series shows the development of the Nazi vote from 1924-1934 within the background of the social forces previously mentioned.

Firstly, a graphic showing the distribution of  German Catholics vs Protestants int the 1934 Census.

The darker the area, the more Catholics.
Next, the Nazi vote in;

Here's the 1934 Census again. The darker the area, the more Catholic it is:

That's pretty impressive. Whilst the Nazi party did make inroads into Catholic Germany, its power base was Protestant. Anywhere between 30-50% of Protestants voted for the Nazi's. So who did else did they vote for?

The Centrist party represented the Catholic political force. They certainly did not get their vote.

The Communists, they seemed to get some love;

But the other main competitor to the Nazi's for the hearts and minds of Protestants were:

The Protestant vote was split between the powerful anti-traditional forces of Socialism and Fascism with a smattering of Communism.  Way to go Team Luther!! In fact, the Protestant vote for the Nazi's was greater in the July 1934 election, but it appears that they started to get a little scared of Hitler and when the November vote came, directed approx two million votes away from the Nazi's to the Socialists and Communists!

Only 10-20% of Protestants seemed to reject the new radicalism and directed their vote to the German National Peoples Party. This party was comprised of the deep social conservatives of Protestantism and it attracted about 10% of the vote up North.

It's party members were initially sympathetic to the Nazi's but after a while saw that they were completely nutty and crossed over to support the Catholics against Hitler!

The graphs were obtained from this site.

Posted by The Social Pathologist at 8:58 pm 10 comments:

I was quite surprised at the electoral maps that I published in my previous post. I was able to find another one which illustrates the voting patterns more clearly. I'm sorry for the small size but I could not find a bigger version of it.

Now, the illustration breaks down the pre-WW2 map of Germany into electorates. The redder the electorate the more support the Nazi's had in it. Green areas are areas where Nazi's were unable to win seats. Now the taller the individual electorate, the higher the proportion of Catholics in it. Flatter areas are Protestant dominant.

Posted by The Social Pathologist at 11:45 pm 5 comments: 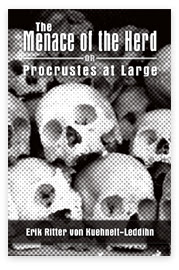 I was surfing the manosphere yesterday, when over at Vox's place I noted this comment by "artie" in response to Vox's  post, "Democracy vs Aristocracy".


It will be interesting to see how long this farce will go on.

I also on the sceptical side. The EUcrats always have the righist hammer to throw down to the people. It has been the most effective political weapon in Europe since the end of WWII.

That's why I think the work of Kuenehlt-Leddihn is so important....and ignored.

Now, I've never heard of Kuenehlt-Leddihn before and I thought I would read up on him.
His Wikipedia entry is here.

He appears to one of those freaky bastards* that the educational system of the old Hapsburg empire seemed to produce. The last of the great renaissance men and a man who also liked to thump some of themes pushed by this blog. Anyway, he wrote a rather influential book in the 40's, The Menace of the Herd. It's available, from the Mises Institute, as a pdf here.

I was having a browse through the book, when in the appendix I noticed this:

All I can say is wow!

It seems that whilst Hitler was a bad Catholic, all those nice Protestants really liked him........ a lot. Much more than his fellow Catholics actually. No seriously, I mean, WTF?

The reason I bring this up is because of a comment thread over at Ferdinand's. Commentator Thursday, for whom I have very much respect, says:


It is time to get off this “liberalism is the result of Calvinism/Christianity/Nominalism/whatever” nonsense.

Now, this is not a dig at Thursday but rather a spectacular demonstration of the opposite. I'm sorry but religion matters. Big time.

Kuenehlt-Leddihn was no fan of Protestantism, but he did recognise that sound Protestantism would have probably prevented the rise of Hitler. It's the watered down version of it that is toxic.

And by the way, Kuenehlt-Leddihn correctly diagnosed Nazism as a leftist phenomenon.

Posted by The Social Pathologist at 11:41 pm 7 comments: