Buddhism is centripetal, but Christianity is centrifugal 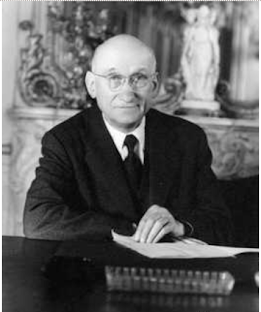 Yet another interesting figure that pops up in relation to the life of De Gaulle is Robert Schuman.  Jackson's biography only mentions Schuman very briefly which is a shame because when you begin to understand what de Gaulle is all about he deserves far more prominence. He is also a great example of how an "orthodox" Christianity can be self-defeating.

It would quite easy to forget, especially with the modern EU's furthering of the globohomo agenda, that it was founded by men men with a deep Christian faith. In the aftermath of the Second World War, the political landscape of most of Western Europe was dominated by conservative--i.e. center right--Christian political parties. Adenauer, de Gaspari and even de Gaulle, for example, were all profound believers and the political climate of the time was strongly influenced Christian social theory.

Monnet was not Christian, but his supra-nationalist ideas "synched" closely with the opinion "mainstream" Christian politicians and senior public servants. One such politician was Robert Schuman and it was his political patronage which put the Monnet plan in action. Essentially he was the midwife of the EU.

By all accounts Schuman was a very pious man. As one politician said of him, "What can you do with such a man who prays all the time." Religious from an early age, devotional and a man committed  to seeking peace among the European peoples, he embodied what one considers the ideals of a holy "layman": Prayer, asceticism, regular mass, daily rosary, etc. were all parts of his life and at one point he considered being a priest. While being pursued by the Gestapo during the war, his most prized possession was his missal. He was seriously religious.

Schuman was also a Thomistic scholar and lawyer. His political position was strongly influenced by Papal documents and a political reading of St Thomas, among other authors. It was his Christianity which impelled him to bring about a lasting peace in Europe.  This, of course is a laudable aim. What he was trying to do is bring into being  a Christian political vision. But here is where it's starts to get interesting: de Gaulle was also profoundly religious, but not a "churchy" type of way. De Gaulle's faith was deep but he wasn't a wannabe monk, and his politics reflected his own Christianity. De Gaulle was a Christian nationalist, Schuman a Christian internationalist.

Schuman felt that many of Europe's problems were as a direct consequence of nationalism. Now, his studies of Thomism meant that Schuman could not get rid of national identity entirely, but he wanted to subordinate it to the notion of "Europeaness."  He felt that the best way to do this was by breaking down borders as much as possible; through economic integration, the free movement of goods and people and the management of the continent by supra-nationalist bodies governed by technocrats (no local favoritism) . These supranationalist bodies, run on majority rule (of the member states), would have binding powers on those who disagree. The aim was to break down the borders, both materially and cognitively.  But the essential idea is that national identity in any meaningful sense was an evil.  The solution to the evil of nationhood was the incorporation of the sense of self into a greater being.  This is Christian Buddhism 101, and the political application of Christian theology of kenosis.

He realised the need for a united Europe but the idea that France could be France when governed by a supranationalist Dutch, or German was insane to him. In order to preserve French identity France, like German, Italy, etc had to act independently and in a way which furthered their own interests.  From him, Europe was a collection of states, each with its own identity, but which shared a common culture.  If Europe was to unite, it should do so through co-operation and not incorporation, as this preserved the individual identities of the states. De Gaulle's conception of identity was rooted in a Christianity similar to that of Chesterton's and Charles Peguy (one of de Gaulle's formative influences) it emphasised identity and was anti-keanotic. Once again to quote Chesterton:

This is what makes Christendom at once so much more perplexing and so much more interesting than the Pagan empire; just as Amiens Cathedral is not better but more interesting than the Parthenon. If any one wants a modern proof of all this, let him consider the curious fact that, under Christianity, Europe (while remaining a unity) has broken up into individual nations. Patriotism is a perfect example of this deliberate balancing of one emphasis against another emphasis. The instinct of the Pagan empire would have said, "You shall all be Roman citizens, and grow alike; let the German grow less slow and reverent; the Frenchmen less experimental and swift." But the instinct of Christian Europe says, "Let the German remain slow and reverent, that the Frenchman may the more safely be swift and experimental. We will make an equipoise out of these excesses. The absurdity called Germany shall correct the insanity called France."

De Gaulle tried to maintain this tradition. What you begin to see when you contemplate the Christianity of de Gaulle and Schuman is that they were two different Christianities: One emphasised identity and one de-emphasised it, and the question is which was the truly Christian? My own understanding of Christianity--which delights in the particular-- would lead me to the conclusion that Schuman was the heretic.......but he said a lot of prayers and went to church a lot and that counts you see.

As the EU thunders against Orban for pushing back against it's LGBT agenda, one wonders what Schuman must be thinking now. As for the Catholic Church, it regards de Gaulle as a politician and has beatified Schuman.

And they wonder why the faith is dying.

As I say, we're in the midst of a heresy.


Posted by The Social Pathologist at 11:50 am 7 comments: