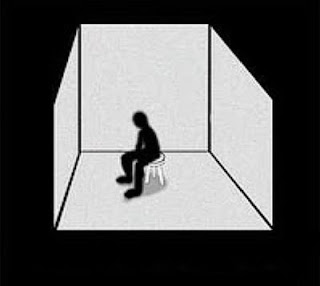 (Some explanatory notes. Chambers considered Socialism, Leftism of any kind and Communism to be essentially the same ideologies, differing only in the practical means of implementing their vision)

This is the fact which absolutely sunders the mind of the Communist from the traditional mind of the West-which makes him in the mass a new breed in history. For our breeds, in this sense, are defined by the view we hold, unconsciously or not, of the world and its meaning, and the meaning of our lives in it. Obviously, a breed of men who hold that everything is in violent flux and change, moving by laws and in a pattern inherent in matter, and having nothing to do with God-obviously, that breed of men is different in kind from the rest of mankind. It is closest, in our time, to the viewpoint of the scientist for whom a simple, solid chair represents a form of energy whose particles, seemingly solid and commonplace, are in fact in violent motion. This, incidentally, rather than the "Progressive" elements in Communism which are usually brought forward in such cases, is the instant point of appeal which Communism so often has for the scientists of the West. They feel in Communism the force of a faith based on a material reality which more or less matches their own vision of reality. It is an abstruse view, and the scientists who hold it are lonely men, since the masses of the West cannot possibly understand or sympathize with what the scientists are talking about. The intelligent Communist knows exactly what they are talking about though he may know little or nothing about abstruse physics. Similarly, the scientist may know little or nothing about the niceties of dialectical materialism. Yet each senses that the other's basic view of reality is much the same. The affinity is strong.

This process in history, and this view of it, Communists call dialectical materialism (or, in that  Communist shorthand that we commonly call jargon, Diamat). It is dialectic because it deals with quantities of force in motion, sometimes violent, sometimes gradual. It is called materialism because the Communist mind, like the scientific mind, rejects any supernatural factor in his observation of experience. In short, God is rigorously excluded from the equations of changing force in which the Communist mind tirelessly seeks to grasp, to express, and to act on history at any and every moment.

To try to explain Communism and the Communist while ignoring dialectical materialism is like trying to explain a man's actions while leaving out the chief clue to his mind and his motives and general viewpoint. Dialectical materialism is the central fact of Communism. Every Communist is a dialectical materialist. Ultimately, be cannot be understood in any other terms. This does not mean that all Communists are consistent or successful  dialecticians. There are millions of Communists in the world and they show the same gradations of intelligence and character as millions of anybody else. There are millions of Christians, too, of whom only a comparative handful are theologians (Communists say: theoreticians). The mass of Christians is held together by a faith in what suffices to explain to them the meaning of their lives and history, although even highly intelligent communicants may be quite vague about the doctrines of their faith, or even specific articles of it. This is made possible because the center of efficacy of their faith is the Cross, using that symbol in its most inclusive sense. The Cross makes them one in faith even though at thinner fringes of Christendom the efficacy of the Cross is questioned or tends to fade. In much the same Way, dialectical materialism is the effective force of Communism, and even when understanding is weak or lacking, it operates as a faith which explains satisfactorily to millions of Communists the meaning of life and history-reality, as Communists say. By this they always mean reality in a state of flux, usually violent. Dialectical materialism is the crux of  Communism, and not to understand this means  never truly to understand the Communist.

Chambers here clearly puts forward his proposition that what separates the Left from the Right is the metaphysical vision of man. The Leftist vision of man is that of a machine which responds to physical forces which themselves are a product of circumstances. It follows therefore that a man's behaviour may be predicted, in the same way the same way we can make other scientific predictions,  by analysing the forces in play at any given moment. There is no free will, there is no choice, only the arrangement of matter responding to temporal forces.

Evil, according to the atheist, is a product of circumstances which are either exogenous such as poverty, violence and oppression or endogenous such as genetics. The social desire to get rid of evil hence resolves around social programs to eliminate social evils, the other stream of leftism (fascism and its crytpo vairant, HBD worship) seeks to eliminate it through better breeding and facilitation of evolution. It's really a testimony to just how much Kool-Aid Western Society has drunk when Fascist and Socialist are seen as the polarities of Right and Left when in reality they are factions of the same team, the materialist vision of man has utterly permeated the ideology of West.

It is this materialist ideology which is corroding the west. Lots of well meaning Righties feel that if abortion could be could be made illegal, porn blocked on the internet and the tax rate lowered that all would be right, but it wouldn't. In the next election the people would rebel, and those laws would be repealed,  since the current laws reflect the wishes of the people. That's not to say that legislative reform would not stem the tide for a bit, but inevitably the slide would continue. You can't force virtue onto people, people have got to take it on board themselves.

There is no technological fix which will remedy the corruption of the bankers and politicians, you simply need honest men who are prepared to pay the price. What does it matter if your country can push the world around whilst at home you wife is sleeping with next door neighbour,  your kid is a sleazy realtor  and your daughter a stripper? The structure is corrupting from the inside. Moral relativism, which flows from atheism, is the poison of the West. There is no political arrangement which will save the West because the salt has lost its saltiness.
Posted by The Social Pathologist at 10:20 am 9 comments: