The HILDA Survey, run by the University of Melbourne, is a large survey into the demographics and opinions of approximately 19,000 Australians. Recently I was leafing through it searching for income distribution data when I came upon some data which some of my readers might find of interest. Considering that Australia is part of the Anglosphere, I think that it's findings could be considered as broadly applicable to rest of it.

The data in question concerned itself with attitudes towards marriage and relationships. The people surveyed were given specific questions and their answers are given below.
(click on the image for a clearer view)

1) That Marriage is an outdated institution. 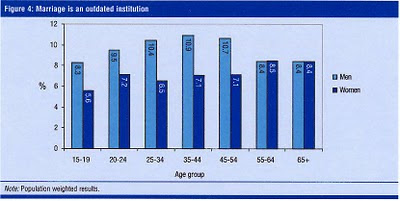 Comment: It whilst the majority of people still believe in marriage, women are still its biggest supporters.

2) It is alright for an unmarried couple to live together.

Comment: I think this is a good measure of how de-Christianised the country has become. Practical Christianity as opposed to theoretical.

3) That Marriage is a lifetime relationship and should never be ended.

Comment: Whilst most people believe in marriage, it seems that serial monogamy is what they consider as "marriage".The majority of people do not believe that marriage is a permanent state. Curiously, that in this age where men are afraid to commit, except for the 20-24 age group, men seem more committed to the idea that marriage is permanent than women. Something that I wouldn't have expected given that women seem more preoccupied with getting married.

4)That it is alright to divorce even if you have children.

Comment: Once again, another surprising finding. It would appear that the majority of women, with the exception of the elderly, do not see the incentive in staying in the marriage for the sake of the children, despite the overwhelming evidence that it is detrimental to their well being. Sticking together for the sake of their children seems to be something men, especially younger ones, are prepared to do.

5) That it is alright for a woman to have a child as a lone parent.

Comment: Once again the "caring sex" shows that, especially in the child rearing years, self gratification overrides child well being. It must be admitted though, that the majority of both sexes see sole parenthood negatively.

6) That Children are happier living with both mum and dad. 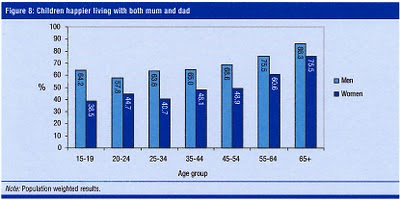 Comment: I personally found these findings horrifying. Amongst the majority of women in their reproductive years, the ideal of a two person family had been abandoned. Please note that men did not share these views. It would appear that a majority of women have a more "flexible" idea of what constitutes and ideal family than men. It is then no surprise at what the results were when the following question was asked. 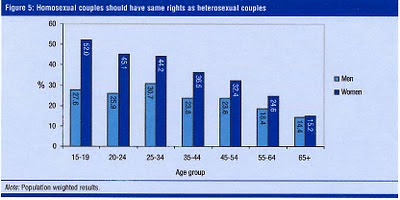 Comment: Whilst the majority of women don't support gay marriage rights, it would appear that an uncomfortably significant minority would support such a measure.

Looking at these findings it is of no surprise that the majority of divorce is instituted by women. Whereas men seem to see marriage as a commitment, women seem to see it more as a relationship. More importantly, women seem to see it solipsistically; their conception of marriage being a state recognised relationship rather than a commitment of two people to each other, through thick and thin. I make that statement on the observation that the well being of the children is secondary to the quality of the relationship. The idea that a mother and father are necessary for a child seems to be a concept that has been abandoned by a majority of women as an ideal. Children, according to the majority of women, can thrive equally in any type of "committed" relationship. This my friends is Bullshit. Men and women it would seem have different conceptions of what marriage is.

Now it needs to be stated that not all women think this way, but it would appear that the majority do. I really do like women and am not naturally misogynistic, but when I see figures like those above........................it really makes you wonder.


(Note: The above tables were reproduced without permission from The Statistical Report of the Third Hilda Survey found here. I have reproduced them in good faith on fair use grounds.)
Posted by The Social Pathologist at 10:03 pm 14 comments: