The PIll and Divorce.

Roissy recently put up an interesting post on the link between contraception and divorce. Unlike Roissy--and a lot of others--I'm not that convinced that the Pill is a solvent of modernity. While the link between pill use and sexual immorality would appear to be intuitively obvious, in my experience, I have found that what is intuitively obvious is sometimes not how things are in reality. Inuitively, we all know that easy availability should result in a decrease in out of wedlock births. 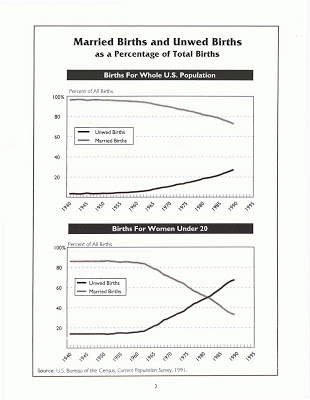 I don't try to complicate things for the sake of complication or try to find complex explanations where simple ones will do, however, the whole "pregnancy as a deterrent to promiscuity" argument has never really appealed to me. From the earliest days of my medical training, it always surprised me just how many women who were sexually active weren't on the Pill. Whilst it's true that the Pill markedly reduces the risk of pregnancy, it takes nothing away from the fact of promiscuity.

One of the problems with men writing about women's issues is that they think like men and not like women. Women are far more social creatures than men are, and when they act, their moral calculus always involves a consideration of how their act will be viewed by others. Shame and social ostracism have their powerful effect on women because of this, and in her mind,  the social consequences are just as important as any benefits accrued through any specific act. In societies where promiscuity is viewed negatively, you can make a woman infertile but you can't make her slut.

It needs to be understood that pre 60's society regarded out of wedlock pregnancy as a big deal.  But is also needs to be recognised that promiscuity was also a big deal in itself, regardless of the natal consequences. No one wanted to go sloppy seconds. Being the town bike, yet without children, was no mark of distinction. Cultural opprobrium rather than fear of pregnancy kept most women in check.

But perhaps I'm wrong and lets see what science says about the matter.

While I'm a bit dubious with regard to the methodology, Divorce and the Birth Control Pill by Miriam Marcem shows only a very small increase in divorce with availability of the Pill. 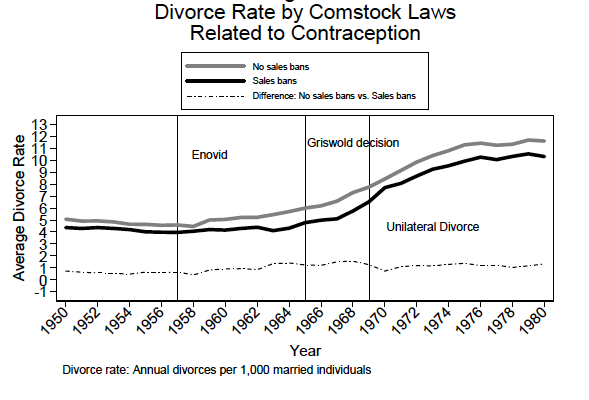 As you can see, in States where there was an availability of the Pill there is only a small increase in the divorce rate compared to the states where the Pill was less available. (It interesting to note that the difference still exists before the introduction of Enovid. i.e. The Pill)

In fact, women who got married after the pill was made available had slightly longer marriages on average. i.e. It exerted a small protective effect against divorce.

This is also in keeping with the latest research on female mate selection whilst on the Pill. Much has been said about the females in estrus preferring cads to dads but when you have a look at the actual data you can see that the preference for cads, whilst significant, is still quite small. 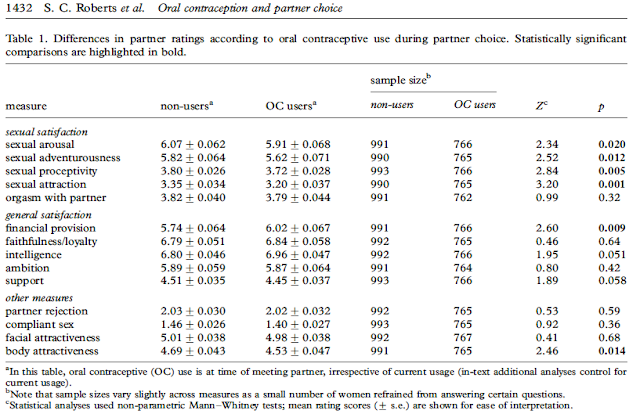 The point is that the Pill's effect on marital stability is small and may in fact be positive.

The take home summary is that the Pill's effect on marriage is very small. So what then drove the change and the sudden epidemic of divorce?

Once again, another obvious explanation but one which, on further scrutiny, fails the test.

In a very interesting paper, Does Culture Affect Divorce Decisions, by Furtado et al, the authors set about trying to see how influential culture was on divorce. Their methodology was as follows:

To separate the effect of culture from institutions on an individual’s probability of divorce, we examine divorce patterns of immigrants from Europe who arrived in the US at or under the age of 5. Immigrants in our sample have lived under the laws, institutions, and markets of the United States. However, since their preferences are likely to reflect the attitudes of their parents and ethnic communities, differences in their divorce rates by country of origin may be interpreted as evidence of the importance of culture. For example, if divorce laws were the only explanation for why Italy has a
lower divorce rate than Russia, then when we remove differences in laws by examining Russians
and Italians living in the same city in the US, all Russian-Italian divorce differentials should be
eliminated.


Quite a simple and commonsense approach, though it has some problems. First generation immigrants, whilst strongly being influenced by parental culture, will still become acculturated (to  varying degrees) by the prevailing environment. Still the data is interesting. 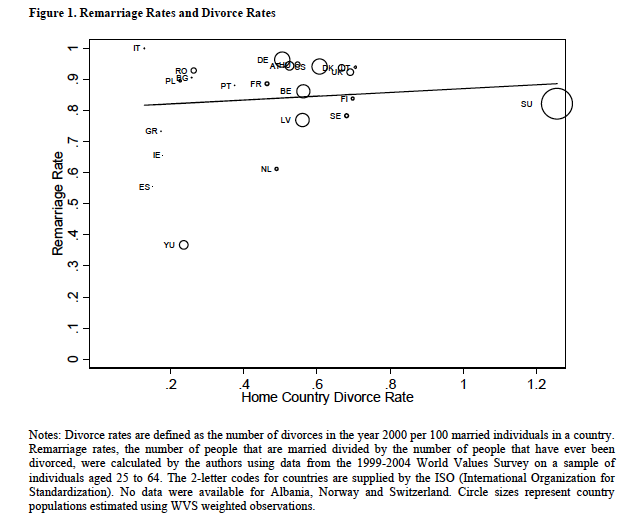 It's appears that divorce rates are almost divisible along an North West/South East axis. It's quite possible that the variation in divorce rates may be due to local institutional factors. But when people from these countries move to the U.S. (and the effect of institutional variability is diminished) we get the following data. 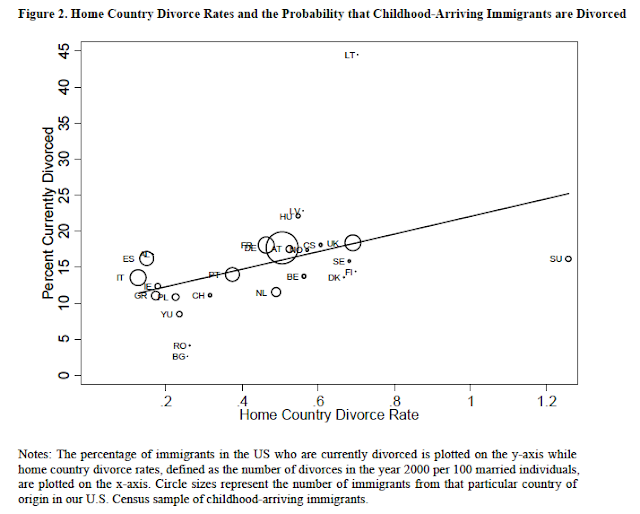 What's interesting about this study is that the protective effect was more pronounced in regions where there was a large community of similar people i.e ghettos. The other interesting finding from this study was that the cultural protective affect seem to apply to women more than men, in other words, women adopted their behaviour to group norms more than men. *


These findings were also demonstrated in a very good Australian study, which showed that being of a Mediterranean background was very protective with regard to divorce. The  Meditteranian effect dwarfs all other typical sociological considerations with the exception of maternal employment. 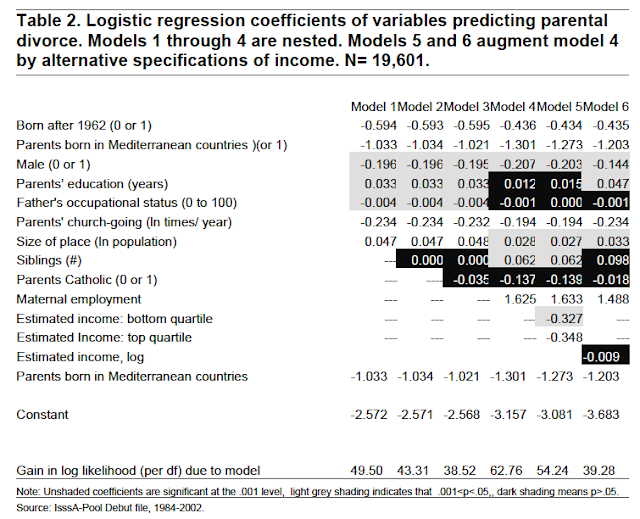 *Just a brief word about maternal employment.  Female employment is highly correlated with divorce but the Australian authors (quite rightly) seem more circumspect with regard to its relationship when compared to American ones. Anecdotally, I grew up in a large Mediterranean immigrant community. In my little bit of the world, the Italian mothers hardly ever worked outside the home, the Croatian mothers nearly all worked in factories and the Greek mothers were 50/50. Divorce in all communities was rare.  I also didn't know what people used for contraception but most families had only two kids.

Now if the Pill, no-fault laws and maternal employment were all causative factors with regard to divorce why do people from Mediterranean cultures seems so powerfully resistant to these corrosive effects when exposed to them?

Briefly, Mediterranean cultures are far less individualistic and see the individual as not only having rights but as also having obligations, especially when it comes to family.  Divorce, even when easily available, is not an option they will choose.

On the other hand, people from  North Western European cultures will take the option when it is available.

I personally don't think that the 60's were a period of cultural revolution, rather it was period of institutional revolution.  The culture had changed well before then and it was a time when the institutions of the land finally caught up with the popular will of the people.  The reason why the whole traditional edifice came tumbling down so rapidly once the floodgates were open is because its foundations were rotten.  The people had already given up on traditional morality and its guise was only maintained by the coercion of the state.  The fact that the Pill made its appearance at the same time is a classic case of correlation rather than causation. It was culture, not the Pill, which drove the divorce epidemic.

*In another interesting paper, aptly titled Breaking Up is Hard to Do, Unless Everyone Else is Doing it Too: Social Network Effects on Divorce in a Longitudinal Sample Followed for 32 Years shows just how pernicious peer group norms are at promoting particular behaviours.

Posted by The Social Pathologist at 7:05 pm 14 comments: