It may be worthwhile for some readers to read this post before proceeding. 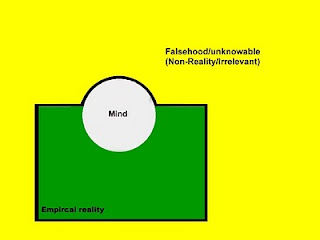 The green area and white areas represents knowledge which can be independently verified by way of sense data, the yellow are is falsehood. As mentioned previously, anything which lays outside the "sense barrier" is dismissed as unscientific knowledge.

However, let us consider the following situation. Suppose there are two strict empiricists, one of whom has the faculty of sight, the other, is blind from birth.

Now let us consider the proposition P, where P= raspberries are red in colour. 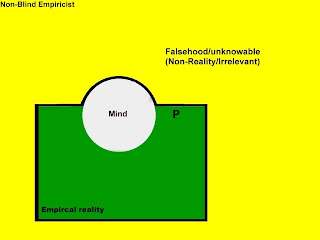 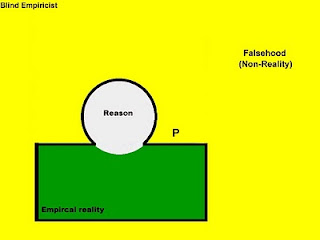 Now,  our blind empiricist may acknowledge that he is limited in some way, and defer to his sighted colleagues on the matter of the colour of raspberries. But his knowledge of colour is then not based on any "empirical" observation but is based upon the truthfulness and his trust in his colleagues. He is not being "empirical" about the matter at all.

On the other hand, our blind empiricist may be a Marxist or Postmodernist, and believe that the whole concept of colour and sight is an oppressive mechanism by other blind empiricists to keep him subjugated. He would be logically consistent though, because being unable to verify sight, he-- being a strict empiricist--would have to accept that the phenomenon is not real. In order to liberate himself from the chains of oppression he would have to wage war against those who claimed that they could see.

The point that point that I am trying to belabour here is that realities can exist beyond the "sense barrier" which we have no way of proving. This is and was the conservative view. The acceptance of "religion"as a valid source of knowledge stems from this conception of reality. How men gain knowledge of what's on the other side is a subject which I will deal with later, but suffice to say that whatever's happening on the other side of the sense barrier is empirically "unprovable".

As I have said before, Conservatism is the philosophy of living according to the truth of things. People who are intellectually, as opposed to dispositionally, conservative motivate their actions according to a perception of reality. As their knowledge of reality is improved, their behavior is modified. Conservatism is about living rightly, not living "oldly".

Conservatism therefore does not have a problem with logically consistent empiricism, where the problem lays is with logically inconsistent empiricism. An empiricism that makes positive claims about what exists beyond the "sense barrier" is logically inconsistent, since according to Empiricism, it's the senses which either positively confirm or deny a theory of reality. Atheism therefore represents a series of statements which resemble religion more than the scientific method. The only honest statement an Empiricist can make about what exists beyond the sense barrier is that it is unverifiable: Agnosticism.

It's this logical inconsistency which places Atheists outside the Conservative camp. The Atheist's conception of reality is at odds with the Conservative's one.  Conservatives accept that valid knowledge can exist "beyond the sense barrier",  this for an Atheist is intolerable since such knowledge is empirically unverifiable and therefore arbitrary or false.


The question is then, how do you rationally determine what is beyond the sense barrier? The answer is you can't.
Posted by The Social Pathologist at 10:43 pm 19 comments: