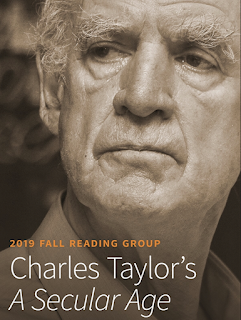 One of the main contentions of this blog is that politics is downstream from culture. Culture, itself is largely formed by values, which are in turn strongly influenced by religion.  It's also this blogs contention that the decline in religion is the main cause for the decline in the West and that any hope of its restoration is also contingent upon the return of religion.  I know it would be easier to propose some political program that advocate this approach but my own analysis of the situation, over many years, has led me to the conclusion that there is no other way.

That's why for a while now I've taken an interest in the process of secularisation. I've been away for the blog for the past few weeks because, firstly, for professional reasons I've been busy with matters concerning the virus. Secondly, because I've been working through Charles Taylor's, A Secular Age.

Dear God, what a slog!

I've read some quite awful medical textbooks which have made the eyes glaze over but Taylor's book, in my opinion, is in a league of its own. I found it an incredibly difficult book. Not because the concepts that Taylor is trying to get across are difficult to understand, rather, they are drowned in a series of digressions, back-tracks, changes in perspectives and verbosity that obscures more than clarify. And that's a shame because Taylor does have a few interesting things to say, it's only that they are drowned in an ocean of verbiage.  Given the high praise the book has received, I thought that it must be me who has the problem, but after reading up on several other reviews of the book I realised  I was not the only one. Apparently, Taylor was asked to write a condensed version of the book, but bristled at the idea since he felt that the book should have been longer!

To those interested in sparing themselves the pain, someone else has done a highly recommended "summary" of it and I referred to it as well to see if I wasn't misreading him. I also compared my thoughts with those of several other commentators as well. I feel I have a measure of the man and his ideas.

Part of the reason why the book is so long is because Taylor approaches the subject as a romantic Hegelian phenomenologist. He writes about the subject of belief from the experiential perspective. i.e how does religious belief, or lack of it, feel with respect to the individual. This is not a book about cognition and more about the experience of religion.  Overlaid is a Hegelian historical approach in analysing the cultural forces which impacted upon the systems of belief, and the individual's response to them.  Taylor examines these in depth and with a degree of thoroughness. But this approach opens itself up to endless digressions, backtracking and conceptual obscurity and  hence the book's length. (I can see why Taylor wanted a longer book).  I also  got the impression that there were many times that the English language failed to give Taylor a term for the concept he was trying to express. Terms such as " Fullness", "Enchantment", "frames"  and " Buffered-self", etc. were imperfect expressions of the ideas he was trying to get across.  It's about the historical gestalt of belief.  In some instances the German language has a better terminology for what Taylor is trying to express.

I would say that the central thesis of this book is that modern unbelief is prevalent  because of the change in what Taylor calls  European man's "frame" i.e. weltanshauung, that occurred as a result of the social and cultural developments that followed the Reformation. Western man started off inhabiting an "enchanted" frame where spirits and magic were understood as being entangled in the material world and ended up viewing the world through a cold instrumental rationalism which was hostile to anything outside it. i.e. the Immanent frame.

Taylor does not say that these frames preclude the faith, simply that  the earlier perspectives or "frames" made the faith easy, modern ones make it difficult. The drift towards secularism is as a result of a change in our worldview. Taylor's insight is that modern secular age is not really strictly secular but is inhabited by beings who find their own grey zone of belief as the result of the unique equilibrium achieved in each particular individual by balance of cultural, personal, psychological and social forces which can vary over time to find a new stable point. These forces work on the individual resulting in them being "cross pressured." It's not the secular age is an age of unbelief, it's an age of a variety of different kinds of belief.

I got the impression that Taylor thought this a better state of affairs than a world of militant secularism  i.e some religion is better than  none, but from my perspective this is a mistaken evaluation. For what matters to me as a Christian, and someone who hopes for restoration of the West, is the re-establishment of the Christian faith and the fact that people choose a false god over militant secularism is of no comfort at all.

I've got to say that I found this book really disappointing and don't understand what the hype is all about. I think it obscures more than it clarifies the loss of faith in the West. There are many reasons why I didn't like this book. Some of which are;

Firstly, the book approaches the subject of faith through a purely immanent frame. As I understood Taylor, faith is ultimately the product of personal choice conditioned by cultural circumstances. The theological element of religion is ignored. I want to delve into this in the next post but I feel that this approach fatally cripples the book in its understanding of the mechanics of secularisation.

Secondly,  I think he gives Catholicism a relatively free pass with regard to setting the conditions for secularisation. Second rate Thomism was as a profound solvent of belief as hyper-Augustinian Protestantism. I feel that in a book of this length Taylor should have given it some consideration.

Thirdly,  I think Taylor's interpretation of the Reformation is open to some serious challenge. Some of his understandings of Protestant motivations I found highly unconvincing.

Fourthly, Taylor's definition of secularisation means a religious freedom rather  than dechristianisation. For a Christian, getting people to believe in the Buddha may not be secular but it does nothing for the Christian cause. The book really should of been called, Belief in a Post Christian Age.

Still, as much as I really didn't like this book I have to commend it for several reasons:

Firstly, most people are not strict logicians, and the experience of religion is more a feeling that a logical demonstration. Taylor's approach therefore is more akin to how the average person experiences religion as opposed to how the convert or true believer does, and is therefore useful in understanding the basis religion or secularisation as a mass phenomenon.  Taylor does not take the approach of the zealot.

Secondly, there are nuggets of wisdom in this book but finding them is like panning for gold. You've got to sift a lot of waste--and verbiage-- to find them.

Thirdly, the Hegelian approach is probably a better way of approaching the gestalt of cultural phenomenon rather than a simple reductionist one.  Western secularisation is the product of multiple factors and simple reductions that explain everything i.e. race, The Enlightement, nominalism, etc. sometimes obscure more than clarify the issue. A lot of the critiques of modernity especially in the non-official Right are reductionist and are therefore blind to important factors that are outside their thrust. Their popularity most probably rests on the fact that most people can't juggle more than one variable in their head at any time. With stuff like this you have to do multifactoral analysis to do them justice.

Fourthly, and perhaps most importantly, Taylor introduces the concept of excarnation. This is a hugely important topic that deserves a lot more thought since in my opinion it is one of the main drivers of secularisation.  This blog introduced this concept several years ago [Preen] calling it decarnalisation. It was a pleasant surprise to see something thinking along the same lines! I think it is an important concept with regard to the weakening of the Christian faith and while this blog only touched on the subject Taylor pushes the idea further.

As said before,  this book is an increadible difficult read. And despite its incredible verbiage, what haunts this book is what is not is only indirectly mentioned, i.e. the spirit of Augustine or at least a fanatical interpretation of his teachings. I honestly don't actually think that this is good book about secularisation but what I do think that this book is a good book on how unchecked asceticism can deform and undermine Christianity.  While reading this book, I formed the opinion that an excellent companion book to this one is G.K. Chesterton's, St Thomas Aquinas. Chesterton, with both brevity and clarity, explains what was stake when Aquinas provided an antidote to the platonic tendencies in Augustine. The Reformation was in many ways justified but in providing a corrective to many of the abuses of the time in some way reversed this victory.

Bonus: A good review of the book.
Posted by The Social Pathologist at 1:43 pm 8 comments: