How it Works: The Social Processor. Part 2.

As mentioned in the previous post,there are three important factors with regard to the social processing of the female mind. They are:

1) A greater weighting of social factors in female cognition.
2) A sense of unease is self-generated when a woman falls outside perceived group norms.
3) This sense of unease motivates her towards behaviours and actions which effectively integrate her into the group.

Now group norms are derived either from direct experience of a group or through second degree knowledge such as that derived from the mainstream media and given the ubiquity of the media it now forms the predominant source of information with regard to group norms. The media determines "what's in" and "whats out". In practical terms, what this means is that women are susceptible to media manipulation to a greater degree than men. Editors and television producers exert far more influence on female behaviour than logic or religion. Should the editors or producers choose to make religion acceptable it will very rapidly become so amongst women.

A classic example of this mechanism in operation concerns the delicate subject of the Brazillian. (Readers who have been with me for a while will know my thoughts on this matter.) As a doctor, I get to do quite a few gynaecological examination and am old enough to have commenced my career in the middle of the video cassette revolution. With the increasing consumption of porn, women were presenting with "more grooming" than before until Sex and City came along. That show's promotion of the "Brazillian" correlated in my experience with a disappearance of all hair down there, especially amongst younger women. Now this may be just an innocent example of women following fashion but on more sober reflection it's profoundly disturbing.

Women have been shamed into being shameful.

On a more primitive level exposure to non-peer approved stimuli will cause negative emotion: Non-liberal ideas and positions simply won't "feel" right. It also shows why arguing with women who have strong socially weighted cognition is pointless. You're logic may be watertight, but the argument does not "feel" right.

If that were only it.

Over the last 60 years or so, the western cultural ideal of the ideal man has shifted from the religious sober bourgeoisie to the playboy rake, the rebel , the man with issues. It's shifted from the good man to the emotionally unstable man. Our media is conditioning women to find good men objectionable and psychologically unstable or bad men desirable. The cognitive model is as follows: 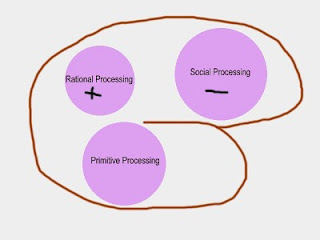 In the absence of any positive or negative stimulation to the primitive processing centres, social negativity outweighs rational benefit. The woman can see that the man is a good man but given the greater weighting to social factors the woman overall will view the interaction negatively. "He's a good man but somethings missing". On the other hand this same man would have been viewed like this 60 years ago: 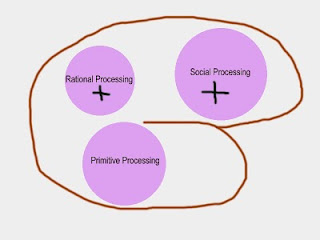 The relationship would have been viewed positively. However, sixty years of liberalisation of the arts, media and culture

On the other hand, after sixty years of the media pushing liberal ideas, some no hoper wannabe artist who refuses to work out of "rebellion against the system" starts a conversation with a girl in the bar and is viewed as follows: 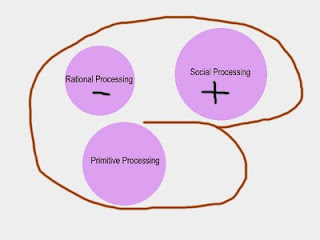 Note, her brain can rationalise that the man is a poor long term bet but given the greater social weighting in female cognition, " I know he's bad for me but we have a chemistry" logic ensures. The relationship is viewed positively. (What were are talking about here is two alpha neutral (beta) males, men who neither repel or stimulate the primitive centers).

Perhaps one of the reasons women, especially professionally educated women, cannot find "decent men" is because they have been socially conditioned to be repelled by normal men. The inabilitiy to find Mr. Right may rest more on a habituated feeling of repulsion to those who are not the ideal. Hypergamy is innate in women, every woman wants to pair up with the best suitor available to her, but what she thinks is best is socially conditioned.
Posted by The Social Pathologist at 9:47 pm 5 comments: