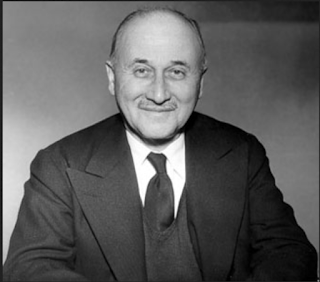 One of the intellectual digressions that occupied me after reading Jackson's book on De Gaulle was the character of Jean Monnet.  I haven't fully delved into his life but he is a character that deserves much study by the dissident right, if only to understand what forces are currently working against it.  Monnet needs to be thought of a sort of anti de-Gaulle and what's extraordinary about his life is how much influence he was able to wield in world events despite never being elected to office.

His own biography is quite amazing, rapidly moving from a cognac salesman to a mover and shaker in the upper echelons of the French government. Prior to World War two, he was sent to buy airplanes for the French, only to join the British with the Fall of France, working as their representative the Roosevelt administration. Their working with the upper echelon's of the New Deal bureaucracy he was able to exert an outsized influence on American military production--Keynes thought he had shortened the war by a year--and post war economic planning for Europe.

Interesting fact: the term "Arsenal of democracy" was coined by Monet and appropriated by Roosevelt.

Monnet also hated de Gaulle, seeing him as a the antithesis of all he stood for.  I have no doubt that he used his position of influence in the US Government to undermine de Gaulle.

Monnet's big idea was that nationalism was the fundamental cause of Europe's troubles and his task was to eliminate it.  The broad outline of his strategy was as follows:

There are three characteristics, which are worth special attention: Sectoral integration, elitism, and supra-nationality in institutions. The idea of sectoral integration originated from the focus of the French modernization plan on the coal and steel sectors as well as from Monnet’s dirigist believes that these were the core economic areas. Elitism and the idea of engaging core groups resulted from Monnet’s desire to reach the maximum independence from national governments and to create direct pressure for integration within each member state.[ED] The desire for supra-nationality is probably the most distinctive feature of the Monnet plan and merits a deeper analysis. Monnet’s understanding of supra-nationality, resulting out of his previous leadership experience, was based on a strong institutionalism backed up by a technocratic elite. Moreover, it was important for Monnet, since these two features were the basis for creating a supra-national power house with the capacity to challenge national governments in creating an irreversible integration process.

The plan was put into practice with the Schumann declaration on the 9th of May 1950, which more or less outlined the mayor ideas of Monnet. Although some scholars argue that Monnet overstated his importance and influence on the event, it nevertheless marked the point at which the implementation of his ideas started. The ambitions of the main actors Monnet and Schumann were clear in stating that the purpose of the outlined ideas was to “lay the first concrete foundation for a European federation which is so indispensable to the preservation of peace”. Along the lines of Monnet’s ideas, the initial stage of integration was to be achieved through the integration of the steel and coal sectors: “the supply of coal and steel on equal terms […]; and the equalization as well as the improvements in the living standards”.

Monnet realised was that commercial integration was the way to destroy national boundaries.  Note also, that he did not work through the usual "democratic" channels to achieve his aims, rather, his method of attack was to organise senior business people and senior public servants to formulate public policy which they would present to idiot politicians who would then try to implement them.  He was a deep state organiser.  Founder of the Action Committee For the United States of Europe, it worked tirelessly for the goal of a "unified" Europe governed by supranational organisations, which controlled by his cronies, would undermine national sovereignty.  The United States strongly supported him in this endeavor.

Welcome to the world of modern global capitalism.

The other thing about Monet was that he was a man with a long term vision. If he lost one battle he would regroup and attack from a different direction. He played the long game. He also didn't seek the limelight, preferring to work with influential people in the background, letting others take the praise. it was a way of avoiding scrutiny and public debate.

De Gaulle called Monnet an "apatride" meaning a stateless person.  De Gaulle saw the game he was playing at and attempted to neutralise him and his organisation. But de Gaulle was ultimately undermined by a democracy and culture that would sell it's identity for peace and prosperity. The great lesson of de Gaulle's life is that unless the culture supports the politics, the politics will wither over the long run.  Politicians may be able to mobilise their countries towards greatness, but if the people want to be mediocre that's where they'll eventually end up.

In the early days Monnet got a lot of pushback by governments for what he was trying to do. But his first big break with the realisation of his European plan came with the assistance of a pious Christian politician. Ascetic, devout, and a student of Thomas Aquinas:

Posted by The Social Pathologist at 11:17 pm 6 comments: