Cohabitation, that is "living together" before marriage has been shown to increase the risk of subsequent divorce of a couple. Many investigators have felt that the practice of cohabitation is selective for people who don't value marriage highly and hence are more likely to divorce when stress is put onto the marriage. In essence, it was thought that the cohabitors more "liberal values" placed them at higher risk of divorce.

Jay Teachman, an academic, investigated this matter further. The study, which is available online, makes for interesting reading. Teachman's genius was to look stratify the cohabitors risk of divorce by the by the number of sexual partners/cohabiting history.

The study was based on data from the National Survey of Family Growth 1995 cycle and involved over 6500 women.

It was controlled for a host of variables.

The study was in no way sponsored or funded by any conservative organisation.

Executive summary: It's not the liberal values, it's the number of partners that matter.


This limitation notwithstanding, the results presented here should shift attention away from research that focuses on the selection of individuals into cohabitation and premarital sex to a focus on the selection of individuals who do not marry the individuals with whom they first cohabit or initiate first sex. It may well be the case that, irrespective of the legal status of the relationship, the relevant distinction to make is between people who form multiple relationships and people who form a single, longer lasting relationship.

The paper data and methods can be found here. Premarital Sex, Premarital Cohabitation, and the Risk of Subsequent. Marital Dissolution Among Women

Oh, in table 4 of the study, Teachman gives probabilities of divorce, which for fun, we will map onto the Heritage Foundation's study. 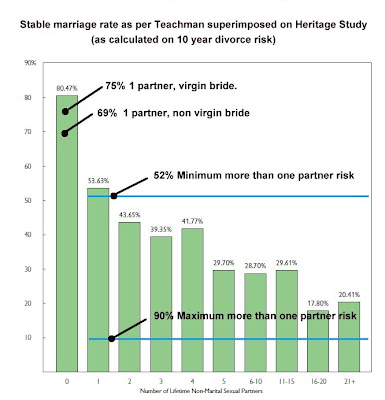 10 year divorce rate of the Teachman study group was 34%. (I didn't use the 5 year divorce risk in Teachman's paper since the Heritage study made its calculations on the people being married more than 5 years)

Teachman didn't plot the risk by the number of sexual partners, merely that more than one and in different relationship contexts, so I have simply marked the range of his findings. Note, the really disturbing one still holds. A soon as a woman has had more than one partner her long term marital stability risk drops to near 50%.

Note: Statements reproduced from the Teachman paper are not believed to violate copyright under the fair use clause. Any violation is unintentional and offending material shall be removed immediately if it violates any repespective laws.
Posted by The Social Pathologist at 1:30 am 305 comments: