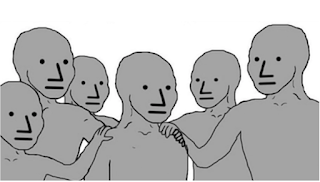 As I have said before, any renewal of Western Society is only going to come about from a renewal of the Christian religion and therefore an understanding of why it "failed" is important in order to avoid repeating the same mistakes of the past. And one of the big mistakes, at least for Catholics, has been the religious approach to the laity which encourages their infantilisation and passivity.

"Heavy-handed authoritarianism which never admits its mistakes and has the effect of puffing up the leaders and infantilizing the subjects.

This is a complex topic but I think you're largely right here. An infantilized laity is not only a spiritually dead one but one also prone to capture by other ideologies."

This sort of thing is characteristic of Communist and other forms of super-centralized socialist regimes. [Ed]

Seeking to turn adult subjects back into children who do not have the agency to act in a responsible and competent manner as well as into programmable automations.

Akin to NPCs in video games which act only according to script and unable to change their routines.

I think that John Rockwell is absolutely right. Until recently, one of the things that Catholic Trads/Ultramontanists would be at pains of emphasising is the importance of of obedience to Papal teaching by virtue of his authority. The Catholic laity was meant to show an Obsequium Religiosum when it came to religious instruction by his ecclesiastical superiors. It being defined as:


Bishops, teaching in communion with the Roman Pontiff, are to be respected by all as witnesses to divine and Catholic truth. In matters of faith and morals, the bishops speak in the name of Christ and the faithful are to accept their teaching and adhere to it with a religious assent. This religious submission of mind and will must be shown in a special way to the authentic magisterium of the Roman Pontiff, even when he is not speaking ex cathedra;[ED: even when he could be wrong] that is, it must be shown in such a way that his supreme magisterium is acknowledged with reverence, the judgments made by him are sincerely adhered to, according to his manifest mind and will. His mind and will in the matter may be known either from the character of the documents, from his frequent repetition of the same doctrine, or from his manner of speaking.*

The good Catholic was not meant to have any active relationship with the faith, his job was to let the Pope do his thinking for him even in instances where the Pope could be wrong. Here's George Orwell, in 1984,  expressing pretty much same concept:


“Oceanic society rests ultimately on the belief that Big Brother is omnipotent and that the Party is infallible. But since in reality Big Brother is not omnipotent and the party is not infallible, there is need for an unwearying, moment-to-moment flexibility in the treatment of facts. The keyword here is BLACKWHITE. Like so many Newspeak words, this word has two mutually contradictory meanings. Applied to an opponent, it means the habit of impudently claiming that black is white, in contradiction of the plain facts. Applied to a Party member, it means a loyal willingness to say that black is white when Party discipline demands this. But it means also the ability to BELIEVE that black is white, and more, to KNOW that black is white, and to forget that one has ever believed the contrary.”

Big Brother may not have called it Obsequium Religiosum but he wanted submission of the mind and will.

*The topic of conscience is a complex one, and although Ultramontainsts like to play it down, the Catholic has a duty to conscience first and then to the Pope. Though, in practice--i.e. most of the Pre V2 Church--this was discouraged.

Posted by The Social Pathologist at 11:40 pm 7 comments: