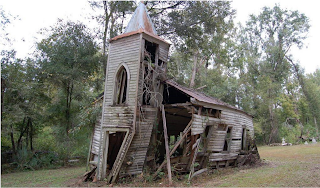 Rod Dreher--who I don't agree with very much--put up an interesting article which I felt deserved far more comment in this corner of the Web.

What's the Matter with Orthodox Countries?

Rod opines on why Orthodox countries have relatively poorer economic performance than that of the West. Now, I don't really want to get into that debate now but wish to simply to show just how powerful an influence religion has in other areas not traditionally associated with it. Weber said the same thing with his work on the relationship between Protestantism and Capitalism.

From my perspective, religion is the structure upon which a culture is built.  Our current religion is Secularism with its essential belief in the irrelevancy of supernatural faith, and the pursuit through reason of health, wealth, pleasure and popularity. Our "slouch to Gomorrah" is primarily as a result of our ditching Christianity for Secularism.

I think it's a truism that politics is downstream from culture. Crappy culture pretty much ensures crappy politics and no matter how you rearrange the political structure it's always going to be a reflection of the prevailing culture. The U.S. founding fathers understood this in a way that Moldbug doesn't. Virtue matters.

This doesn't mean that Secularists can't be virtuous, whatever that means in a secular scheme, it just that virtue, as a Christian would recognise it is a statistical outlier, while in Christianity it is the statistical norm.

The problem is that Christianity has been totally sideswiped by Modernism and has been unable to mount an effective offense against it.  Measures which aimed at "liberalising" the Churches so that they would become more "relevant" have proven to be self destructive failure. On the other hand "Traditionalist" doubling down has produced a few defiant outposts but no real growth. Religious capture of state power hasn't worked out in the long term. The "Benedict Option" so favoured by Dreher, works only under the assumption that the rest of society will leave you alone. Unfortunately militant secularism doesn't work like that. Defence does not win wars.

That 's why I think a revival of popular religion is the only long term solution. However a revival of the "old" religion is unlikely to be of any benefit since the old religion, even when it was popular and strong, proved unable to handle the onslaught of Modernism. What will be needed is something "new". And by "new", I don't mean some new or foreign religion to the West. Rather, it will be the old Christianity, practiced differently and with different emphasis.

Personally, I think this new religion is going to develop among the laity, since I feel that in the Catholic Church at least, the clergy are polarized into their respective ideological camps by temperament rather than reason, one group wanting novelty without intellectual rigor and other stuck with the fear that any change is error: whimsy and paralysis. What will unite both of them will be a an opposition to a religious Dissident Right.  The liberals will hate it for its attack on Kumbaya Christianity while the Trads will hate it for proposing any change at all.

If this group can reform Christianity we have a chance otherwise I don't see any way out at all.
Posted by The Social Pathologist at 11:35 pm 19 comments: