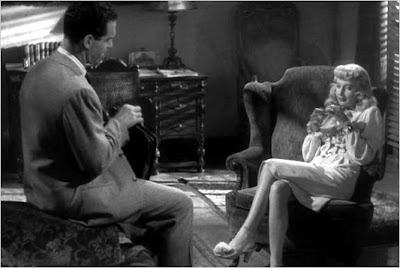 In our previous post, I tried to paint a picture of the cognitive mechanisms at play in the mechanism of natural or instinctive love. Now, in response to Country Lawyers comments, I wish to delve into some other real world problems that the practical operation of this mechanism entails.

As mentioned previously, prior to the feeling of love there has to be some recognition of a good in the object under consideration. The problem is that instinctive love does not necessarily focus on the object in totality rather it can focus on particular good. It's said that a pretty face covers many faults and its this fact of love that opens up the abyss to hell.

The classic example of this evil-in-possession-of-a-good is the femme fatale. (Exemplified by the character played by Barbara Stanwick in the movie Double Indemnity).  Here the woman obviously has the goods of beauty and charm but they are alloyed to a person of extreme malevolence. Her power (which is a consequence of the loving mechanism) lies in the capacity to exploit her goods for evil advantage. Benedict, in Deus Caritas Est, thought that Eros alone degenerated into mere sex, but it also appears to be able to degenerate into simple murder.  Now,  I've used the example of a femme fatale (Eros), but people have been covering up the crimes of their children (Storge), making up alibis for their friends (Phillia) and committing all sorts of bestial actions for their country(Patriotism) since time immemorial. Love is no guarantee of moral goodness.

What's confused a lot of Western thinking about love is that the mechanism doesn't care about the moral goodness of the totality in question, only particular specifics. Every now and then love gets it right and generates powerful emotions directed towards the objectively good but it's just as likely to get it wrong.

I think that the ancients were quite right in calling love, particularly Eros, a divine madness because person under love's spell frequently behaves like an idiot. There is even scientific proof of the fact. The feelings generated by love (which are so pleasant) literally overwhelm the intellect. The lover is literally on "a high",  their fix is the beloved.


We conclude that human attachment employs a push– pull mechanism that overcomes social distance by [Ed]deactivating networks used for critical social assessment and negative emotions, while it bonds individuals through the involvement of the reward circuitry, explaining the power of love to motivate and exhilarate.

( Neural Correlates of Maternal and Romantic Love.pdf  Bartels and Zeki)

Now a lack of rationality is not a good thing and Love is literally blind to the faults of the object. The alpha qualities of the bad boy/femme fatale literally switch off any critical centers in the brain. Individual self interest is thrown out of the window.  Their lovers literally can't see any fault in them.

Which brings us next to the subject of evil. Overt evil is pretty easy to recognise. Shootings, rapes, chainsaw massacres, etc immediately instill repulsion, but  a diabolical genius with an understanding of human nature who wants to wreck havoc and misery would aim to hide his evil under a veil of goods.


“It does not matter how small the sins are provided that their cumulative effect is to edge the man away from the Light and out into the Nothing. Murder is no better than cards if cards can do the trick. Indeed the safest road to Hell is the gradual one--the gentle slope, soft underfoot, without sudden turnings, without milestones, without signposts.”
― C.S. Lewis, The Screwtape Letters

The point that I'm trying to get across is that love is no moral compass and what feels good may be objectively evil. What we see, though, from our little analysis, is that any primacy of "feelings" over rationality is going justify a lot of bad behaviour. Evil can hide under the cloak of love. This brings us squarely into conflict with the Romantic Movement.

Modern Christian thinkers have blamed the Enlightenment for a lot of the worlds ills, but what surprises me is how little criticism the Romantic movement gets. This movement, which emphasised the validity of emotions pretty much above all else, is probably far more corrosive to western social stability than any flawed philosophic ideology.  In the West at least, Socialism is more a feel good trend amongst its supporters than a logically coherent system. Conservatives have debated the left for hours with a litany of facts and logical arguments, but it is all in vain, as their emotional investment in their ideology, their love, so to speak, renders them immune to any arguments. It's just like trying to argue the faults of a thug lover to a teenager.

I mean, take a look at the gay marriage argument. The argument against it is a reasonably rational one, but the usual retort to it is "why can't two people in love have their relationship recognised" and it's this latter argument that resonates with the proletariat. After all, doesn't love justify anything? Euthanasia, he loved her. Divorce, they're out of love. The left, our hearts were in the right place. Noble feelings justify everything. Hard-arsed rationality is given the shove. Indeed, a lot of the motive force behind  PC is drawn from this same cultural font which emphasises the legitimacy of the agreeable lie over the disagreeable truth.  Western society has been hit by a two pronged attack; bad reason and labile emotion. 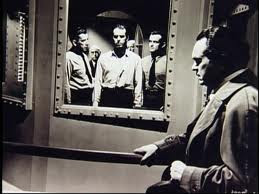 (Fred McMurray heading into the gas chamber. Deleted ending from Double Indemnity)
Posted by The Social Pathologist at 10:37 pm 6 comments: