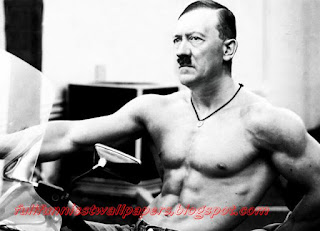 Ray Sawhill has linked to an interesting research paper showing a strong link between physical strength and the propensity for right-wing views. Now the study itself seems reasonably good except that the authors conflate right-wing with self-interested. Nothing like a subtle bit of frame shifting.

It is with these findings in mind that we now turn to the subject of Fascism, and the type of men it would appeal to.

As the study above demonstrated, strong men of low SES will favour social policies which favour wealth distribution. i.e Socialism. The question then is which type of Socialism which such men favour?

Now, anyone who has spent even the slightest amount of time studying fascism will see that it was an outgrowth of early socialism. Goebbels, in this interesting pamphlet outlining the Nazi position, claimed that Nazism was true socialism and that the other variants of it were corrupt.


We are socialists because we see in socialism, that is the union of all citizens, the only chance to maintain our racial inheritance and to regain our political freedom and renew our German state.....

The sin of liberal thinking was to overlook socialism’s nation-building strengths, thereby allowing its energies to go in anti-national directions. The sin of Marxism was to degrade socialism into a question of wages and the stomach, putting it in conflict with the state and its national existence. An understanding of both these facts leads us to a new sense of socialism, which sees its nature as nationalistic, state-building, liberating and constructive. ......

We are socialists because we see the social question as a matter of necessity and justice for the very existence of a state for our people, not a question of cheap pity or insulting sentimentality. The worker has a claim to a living standard that corresponds to what he produces. We have no intention of begging for that right. Incorporating him in the state organism is not only a critical matter for him, but for the whole nation. The question is larger than the eight-hour day. It is a matter of forming a new state consciousness that includes every productive citizen. Since the political powers of the day are neither willing nor able to create such a situation, socialism must be fought for. It is a fighting slogan both inwardly and outwardly. It is aimed domestically at the bourgeois parties and Marxism at the same time, because both are sworn enemies of the coming workers’ state. It is directed abroad at all powers that threaten our national existence and thereby the possibility of the coming socialist national state.

Nazism was tribal socialism. It viewed life as Darwinian struggle granting victory to only those who will assert themselves. When it came to matters of economics the Fascists were socialists as well, but with a difference,...... they were not stupid. Under the Fascist scheme, the state still controlled everything but permitted some private ownership only because it benefited it:


Hitler believed that private ownership was useful in that it encouraged creative competition and technical innovation, but insisted that it had to conform to national interests and be "productive" rather than "parasitical". Private property rights were conditional upon the economic mode of use; if it did not advance Nazi economic goals then the state could nationalize it. Although the Nazis privatised public properties and public services, they also increased economic state control.

So while both systems were socialist there were differences. The Fascists or National Socialists, believed in some private property, some inequality, assertion and tribalism. The Marxist Socialists, on the other hand, believed in strict equality, equal outcomes and universal identity.

Now, imagine you're a young man growing up in late 1920's Germany. The Depression has wiped out the old order and Socialism is the new thing. Which variant of it are you going to pick. Fascism or Marxist socialism?

This study by Price et al may help.

Price demonstrated a medium negative correlation between muscularity and egalitarianism. In other words, muscular people don't seem too enthusiastic on strict equality. (A similar correlation was observed for attractiveness). So given a choice between an equal socialism and unequal socialism the muscular would be more likely to favour the latter. It's not stretching things too much to say that an ideology of force, self assertion, tribalism and worship of the healthy body would be tempting to those who are muscular and attractive. Life's losers, either economic or physiognomic would find a haven in Marxism.

It's interesting when one reads about the rise of fascism how the contemporary observers described them as thugs whilst the communists were thought of as rabble.  Reck describes the Nazi's most ardent supporters being those of the lower middle class; Germany's modern yeomanry. Men who would have had a minor degree of social rank and a degree of personal autonomy but who were totally destroyed by the economic calamity of the Depression. The factory drones and flabby intellectuals embraced Marx.

( Disclaimer. I repeat again, There is no crypto support for the Fascists or Socialists here, both can go to Hell.)
Posted by The Social Pathologist at 10:30 pm 15 comments: