An Officer and a Gentleman. 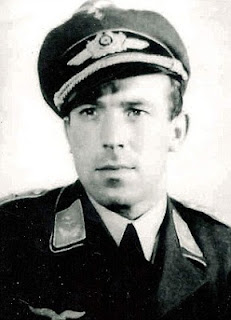 This week I manged to find two posts which intersected with each other quite nicely. The first, was this one over at the Daily Mail.  Now not many nice things get said about the behaviour of the Germans during WW2, and I've certainly got nothing nice to say about the Nazi's, but this story does show that honorable action was possible even in that bestial war. The Luftwaffe, at least in the early stages of the war, acted honourably. In many instances during the Battle of Britain, German pilots would circle around British airmen downed in the Channel where German rescue planes would pick them up. In other instances the British would circle. But as the war wore on, and every advantage was sought, the chivalry wore thin.

But what is interesting is looking at Stigler's motivations for not shooting down the aircraft. When joining his unit he was briefed by his commanding officer Lt Gustav Roedel,


Honour is everything here,' he had told a young Stigler before his first mission. The senior airman added: 'If I ever see or hear of you shooting at a man in a parachute, I will shoot you down myself. 'You follow the rules of war for you - not for your enemy. You fight by rules to keep your humanity. [Ed] ' His moral compass was more powerful than his need for glory.

'For me it would have been the same as shooting at a parachute, I just couldn't do it,' Stigler later said.

What is clear here is that his conception of honour is different to the mainstream conceptions of it. Honour, it appears to Roedel, was not a mark of social merit or standing but rather a practical code of action designed to avoid self corruption. This seems particularly relevant in light of one of Fred Reeds latest essays.


These are degenerate days. Once I breached the walls of Ilium or Constantinople during the Fourth Crusade and killed and looted and raped girls of seven in front of their parents—how they howled! Now perforce I say I do it for democracy, about which I don’t give a damn, or to end evil, though our allies are the worst tyrants we can find. Before, I could torture my captives between two slow fires, or by running a red-hot poker up their neither ends, and this in the public square for the amusement of a bored populace.

For this we hold reunions. We get together in Wyoming and Tuscaloosa and Portland and remember when we were young and the war held off the boredom of life and the star shells flickered in the night sky over Happy Valley and life meant nothing but was at least intense. I hated the H&I fire over the dark forests of a puzzled Cambodia and I hate you cocksuckers living soft at home for sending us and I hate what I did and I hate what my friends did who were there, who are really my only friends. Aind I hope you one day pay, what we paid, what our victims paid and you pay it as we did. And this will bring me the only joy in my life.

Unlike most people, I regard soldiering as profession akin to the priesthood, for greater love than this no man hath. But just like the priesthood, when it goes bad, it goes bad horribly. And the problem for the soldier, particularly, is that his opprotunities to go bad mulitply in combat. Particularly, in drawn out, low grade guerrilla type of war. Which raises a particular question. How do you fight such a war and maintain your humanity? Personally, I think this is another one of the weak points in Western Culture. Our doctrine on the morality of war seems not to have moved much since the 19th Century and has created a situation where we are trying to fight guerrilla wars with battlefield assumptions that are rooted in traditional European history. This hamstrings our soldiers, who are always judged under the same conditions. On the other hand, this failure to develop a doctrine within the Christian tradition has left the door open to utilitarian modes of thinking which justify all actions in the pursuit of victory.

Posted by The Social Pathologist at 12:09 am 12 comments: