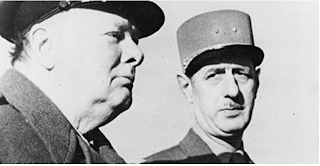 When Charles de Gaulle ended up on the shores of England he had very little in the way of resources, men or support of any kind from the French. He was relatively unknown to the French so its understandable that there was an initial reticence in joining him. One thing he did have however was the support Winston Churchill who admired him in not sharing the defeatism that had permeated throughout French leadership.

Their relationship would later become very tempestuous but what I think is important is trying to understand why Chruchill supported him in the first place. My own reading of the Churchill would lead me to the impression that he supported De Gaulle for two reasons:

Firstly, because Churchill had a strong "romantic" streak which admired De Gaulle's defiance in the face of hopeless odds. I think that despite their future tumultuous relationship, Churchill never lost respect for this dimension of De Gaulle. It's what made De Gaulle stand out from his contemporaries

Secondly, Churchill had a strong pragmatic element to his personality which could verge on the cold and calculating.  The fact of the matter was with Nazism triumphant and the Americans reluctant to join the war, Britain was alone and he could use all the help he could get. In the early days of the War, Churchill recognised that because of his moral qualities, De Gaulle could provide a rallying point for the French who wanted to fight. This, of course, was premised on the British notion that the French wanted to fight. As events unfolded, the British rapidly became "red pilled" about the true nature of the French spirit. The reality is that most of the French didn't want to meaningfully fight for their liberation and rally to De Gaulle, and this, more than Anglo perfidy did more to undermine his position.

Once the the French had signed their armistice with the Germans, life in France became a relatively peaceful affair. In the early stages of the war French Communists caused no problem for the Germans since Russia was allied to Germany.  On the other hand, many "right wing"  Frenchmen were happy with Vichy France calling De Gaulle an English puppet.  Except for a small isolated elements in the country many, French adapted to the new circumstances of life. As for the Germans, they were relatively well behaved in the early stages of the war and this kept tensions low. There was virtually no Resistance, unlike in Poland or Russia. As a side issue, the first German to be killed by the Resistance did not die till over a year after France's surrender, killed by a communist a month after the invasion of Russia.

It's important to understand that for the French this wasn't just a passive acceptance of the facts but an active approval of them.  France's moral rot was deep.

After the evacuation of Dunkirk, there were approximately fifty thousand French troops in England. De Gaulle put out an appeal, only one thousand joined. Recruiting was a constant problem.  De Gaulle's son Phillipe, remembers his father raging against the French while admiring the English will to fight.

What perhaps undermined De Gaulle's position the most however was the raid on Dakar.

Just three months after the Fall of France,  an Anglo-French force set out to capture the African port of Dakar, part of Vichy held territory. At the sight of the liberators De Gaulle confidently predicted that the French would come over and join the Allied cause.  What happened was the opposite. The Vichy defenders fought with a determination against the British that they did not show to the Germans. The invasion force was defeated and it sailed back to London. It was a farce. During the trip back, De Gaulle contemplated suicide. As he mentioned to one of his comrades at the time "If you knew, Major, how alone I feel."

Though the battle is mentioned briefly in Jackson's book, he tends to attribute De Gaulle's despair at the military failure of the episode. What I think Jackson misses is the psychological dimension to this defeat. De Gaulle thought of France "mystically", and this notion conveyed certain ideas of the French character. The idea that French men, when given the choice between liberation by the allies or slavery under the German yoke would actively chose slavery would have gutted him.  The French character had changed.

For the British,  the failure of the French to rally to de Gaulle, diminished his political and military  usefulness and also seemed to have changed the British attitude to Vichy. Following Dakar his relationship with the British would never be the same and the British would see Vichy France as less of potenitial ally and more of a competitive power.

Posted by The Social Pathologist at 10:23 pm 2 comments: