The Logic of Failure. 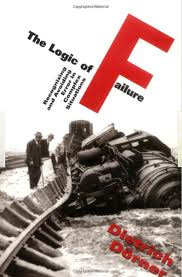 Let me first begin by saying that this is a very good book, not for its writing style but for the scientific data it presents with regard to human cognitive limitations. The problem with authors that write well, is that frequently their books are more appreciated for the quality of their expression rather than the subject matter dealt with. Two authors particularly come to mind: Orwell and Mencken, both of whom seem to be remembered more as literary figures rather than political theorists. This is a shame since both had made profound insights into modern "populist" politics which seem to be overlooked, as the authors are considered more writers than theorists: their writing considered more "art" than "science".

Dietrich Dorner's writing style ensures that he will not suffer the fate, as his book reads more like a technical report on human cognitive limitations rather than a literary work, and as such, is less likely to be dismissed as opinion rather than fact.

David Foster at Photon Courier, to whom I'm indebted for bringing to my attention this book, has a very good review of it over at his site which I would suggest that you read. He gives a good rundown of some of the experiments that Dorner ran and of their results. My interest is mainly in his conclusions and with the sociological implications of the results.

If we could summarise Dorner's findings they would be:

1) Most people are terrible at dynamic multiparametric systems analysis. Even when there are only a limited number of variables, most people can't get it right.

2)People have a terrible time in understanding events that are related but are temporally separated. If action x results in result y immeadiately, the cause and effect link is grasped relatively easily, but the further the separation of effect from cause, the less likely the link is to be grasped.

3)People have a hard time keeping situationally orientated, tending to focus on the big picture at the expense of the details, or vice versa.

4) Most people have a hard time understanding the situation. Either acting too  quickly, acting too slowly, ignoring data that doesn't fit their mental model or making data up to provide a coherent model. In both cases the mental model is chosen over the reality of the situation. Reality denial, in some form or other is integral to many people's cognitive model of the world.

The bottom line is the most people trying to understand reality do it poorly. The real kicker in Dormer's studies is that the participants are university graduates and professionals, people from the right hand side of the IQ curve.  While he did not explicitly study IQ vs multiparametric task performance, he noted that there seemed to be no correlation between IQ and task success. (Personally, when this matter is looked into, I feel that Muliparametric ability will peak at about the 120-130 range, dropping off rapidly at either end: either stupid or Aspergy, See Roissy, Question 15.)

Another interesting finding in Dorner's book was with regard to what happened when attempts were made to help people overcome their cognitive limitations through training and instruction. Dorner describes the experiment in detail:


We divided the Greenvale participants into three groups: a control group, a strategy group, and a tactics group. The strategy and tactics groups received instruction in some fairly complicated procedures for dealing with complex systems. The strategy group was introduced to concepts like "system ... .. positive feedback," "negative feedback," and critical variable" and to the benefits of formulating goals, determining and, if necessary, changing priorities, and so forth. The tactics group was taught a particular procedure for decision making, namely, "Zangemeister efficiency analysis."'

After the experiment, conducted over several weeks, the participants were asked to evaluate the training they had received; figure 39 shows the results. The members of the strategy and tactics groups all agreed that the training had been "moderately" helpful to them. The members of the control group, who had received training in some nebulous, ill defined "creative thinking," felt that their training had been of very little use to them. The differences in the evaluations are statistically significant. If we look at the participants'
actual performance as well as at their evaluations of the help they thought they got from their training, however, we find that the three groups did not differ at all in their  performance.

Why did the participants who had been "treated" with certain procedures think this essentially useless training had been somewhat helpful? The training gave them what I would call "verbal intelligence" in the field of solving complex problems. Equipped with lots of shiny new concepts, they were able to talk about their thinking, their actions, and the problems they were facing. This gain in eloquence left no mark at all on their performance, however. Other investigators report a similar gap between verbal intelligence and performance  intelligence and distinguish between "explicit" and "implicit" knowledge.' The ability to talk about something does not necessarily reflect an ability to deal with it in reality.

You can't put in what God's left out.

If we think about this last experiment for a minute, its findings are profoundly disturbing. It would appear that theoretical problem solving knowledge does not necessarily translate to practical problem solving knowledge.  Buisness school graduates do necessarily make good businessmen. Perhaps one of the reasons why Western economies are faltering at the moment is because there are thousands of graduates from business schools occupying positions in senior management who can "talk the talk" but cannot "walk the walk".

Dorner's book also has implications for political theory: Take for example democracy. It would appear that the average man is suited to understanding simple and immediate problems and such would vote intelligently on such issues, but what about complex issues with long term consequences? Democratic government, given human cognitive limitations, is surely to fail over the long term since the bulk of men are not able to grasp the long term consequences of even moderately simple decision. Democracy (even tyranny) is ultimately corrupted by its own stupidity. Indeed as Dorner points out earlier in his book:


Can we as citizens ever have a complete understanding of the issues on which we are asked to pass judgment on Election Day? We would have to spend all our time reading, studying, and reflecting to reach sound decisions about nuclear power, military spending, immigration, economic policy, health-care reform, and so on and so on. No one can do that. We have to work, eat, and steep sometime, as well. And it Is not just the normal citizen who lacks time to gather information. Politicians faced with the need to make a decision will rarely have time to digest even readily available information, much less to pursue new lines of inquiry.

And yet, it is vital that citizens, or a least the people that make the decisions, do have an understanding of reality, otherwise the wrong decisions are made and civilisations eventually collapse. The problem is though, as Dorner has shown, that even if you limit your decision making to the right side of the bell curve there is only a small number of people that can think appropriately. The ability to perform dynamic multiparametric systems analysis is rare. In a democratic system, where it ultimately boils down to mob opinion,  the system is biased toward the stupid, or more charitably, the intellectually limited. Each iteration of the democratic process more accurately reflects the mob mindset. To quote Mencken:


The larger the mob, the harder the test. In small areas, before small electorates, a first-rate man occasionally fights his way through, carrying even the mob with him by force of his personality. But when the field is nationwide, and the fight must be waged chiefly at second and third hand, and the force of personality cannot so readily make itself felt, then all the odds are on the man who is, intrinsically, the most devious and mediocre—the man who can most easily adeptly disperse the notion that his mind is a virtual vacuum. The Presidency tends, year by year, to go to such men. As democracy is perfected, the office represents, more and more closely, the inner soul of the people. We move toward a lofty ideal. On some great and glorious day the plain folks of the land will reach their heart's desire at last, and the White House will be adorned by a downright moron.

Mencken wasn't being cruel or vindictive in his quote, rather the a reflective consideration with regard to the operation of cognitive limitation in a democratic system leads to the same conclusion. Conservative thinkers are rightly concerned with the subject of human nature, but area that has been neglected is human cognitive limitation.  Our constitutions are designed to thwart malice, but there's no defence against stupidity.
Posted by The Social Pathologist at 11:50 pm 13 comments: