Firstly, I want to thank all the commentators to the previous posts, even those who disagreed with me I'm sorry I wasn't able to reply to everyone, but as usual, it's been a busy week.

My contention that the the success of women in contemporary society may be due to their superior character traits (at least when it comes to work and self organisation) seems to have struck a raw nerve with many commentators. Many commentators seem to want to explain away the phenomenon either as a product of affirmative action or as a result of deliberate discrimination against men.
Personally, I don't buy it.

One of the advantages of family medicine is that you get to see families dynamics in action over an extended period of time. Initial impressions are either refuted or strengthened by repeated observation and after a while you become a good judge of people's character.

Whilst I agree that the world has become progressively populated with feminist harridans, it has also become more populated with less masculine men. As far as I'm concerned, whilst many women may have unrealistic expectations of future mates, in my opinion, there is a degree of legitimacy to the claim that there is a dearth of good men.

Simon Grey disagreed with some bits of my previous post but I've got to agree with him when he says:

Many of the older men I know are not much better.  A good number of them are gossipy, narrow-minded old fools who would rather engage in petty power struggles than work together in the best interest of others.  They seem like a bunch of bitter old bitches.

Even a good number of middle-aged guys that I know can be characterized as losers.  They are overly deferential to their wives, they don’t act as fathers to their children, they allow themselves to be disrespected by everyone.  They are losers, through and through.

And so, while I agree with the MRA crowd that most women would make for terrible wives, I also agree with Slumlord that most men make for terrible husbands.  Quite simply, most people in this world are self-absorbed cowards, too afraid to live up to their potential, and too weak to suppress their self-destructive tendencies.  No wonder their marriages and relationships turn cancerous.

Simon is reporting from America what I see here in Australia.

Now, there seems to be this notion in the manosphere that women today are too choosy, and perhaps they are; but there never seems to be the recognition that a lot of men are no-damn-good. And perhaps, just perhaps, the reason why women are passing them over is simply because they are too repulsive to commit to. 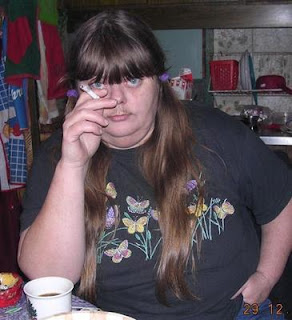 Let us suppose that:

Cigstache is fertile.
She is committed to having a family.
She rejects feminism.
She goes to Church and believes in God.
She is a virgin.
She wants to be a stay at home mother.
She knows how to cook, clean and mend.
She is not a spendthrift.
She is happy to put out whenever.

She clearly possess all the moral virtues of a good wife. Would we consider any man that refuses to commit to her too choosy? Is Cigstache a good woman who has been passed over?

The problem is that many betas don't recognise that they are the male equivalent of Cigstache. Sure, they may posses many moral virtues and provider capability but what they lack is sex appeal. Is such a man a good man?

I suppose what I'm asking is what constitutes the minimum standard of masculinity; the point at which female rejection is justified. When does a man become a loser?
Posted by The Social Pathologist at 11:31 pm 266 comments: