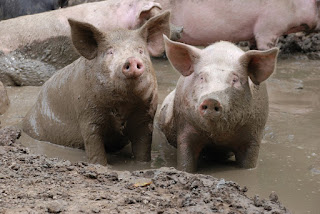 Unlike a lot of this segment of the blogosphere, I'm pretty ambivalent on the subject of a hereditary aristocracy or Royalty. It's a sort of backhanded tribute to Marx when one accepts the notion that those born into a life of privilege are actually morally better than those less fortunate.

I must admit that I have strong sympathies for this view of Jefferson in his letter to John Adams,

For I agree with you that there is a natural aristocracy among men. The grounds of this are virtue and talents. Formerly bodily powers gave place among the aristoi. But since the invention of gunpowder has armed the weak as well as the strong with missile death, bodily strength, like beauty, good humor, politeness and other accomplishments, has become but an auxiliary ground of distinction. There is also an artificial aristocracy founded on wealth and birth, without either virtue or talents; for with these it would belong to the first class. The natural aristocracy I consider as the most precious gift of nature for the instruction, the trusts, and government of society. And indeed it would have been inconsistent in creation to have formed man for the social state, and not to have provided virtue and wisdom enough to manage the concerns of the society. May we not even say that that form of government is the best which provides the most effectually for a pure selection of these natural aristoi into the offices of government? The artificial aristocracy is a mischievous ingredient in government, and provision should be made to prevent it’s ascendancy.

A cursory read of European history will show that princes have been corrupt, kings bad, dukes dissolute, Earls treacherous and Queens promiscuous. In England, we have the virtue of Elizabeth matched by the prolishness of his Son Andrew and former daughter-in-law Sarah. There have been exceptions of course, but hereditary aristocracy is no guarantee of virtue. I'd be far more accepting of it, if we could rid ourselves of the worst offenders without slipping into war.

Which brings me to Sweden. Nothing really surprises me about Sweden and those superior Aryans Nords anymore. It appears that they have had a Royal Wedding and whilst marrying commoners is not the breech of precedent it was before, I must admit, I'm a bit surprised with Sweden's newest princess, Sofia Kristina Hellqvist.  Her credentials are impressive (NSFW). Topless model, Reality TV show contestant,  admirer of  Jenna Jameson.  The picture in the Wiki link shows her just about to hit the wall.

Clearly, some commoners are more common than others. That prince, he sure is a lucky guy.

Welcome to our new overclass.
Posted by The Social Pathologist at 10:47 pm 9 comments: