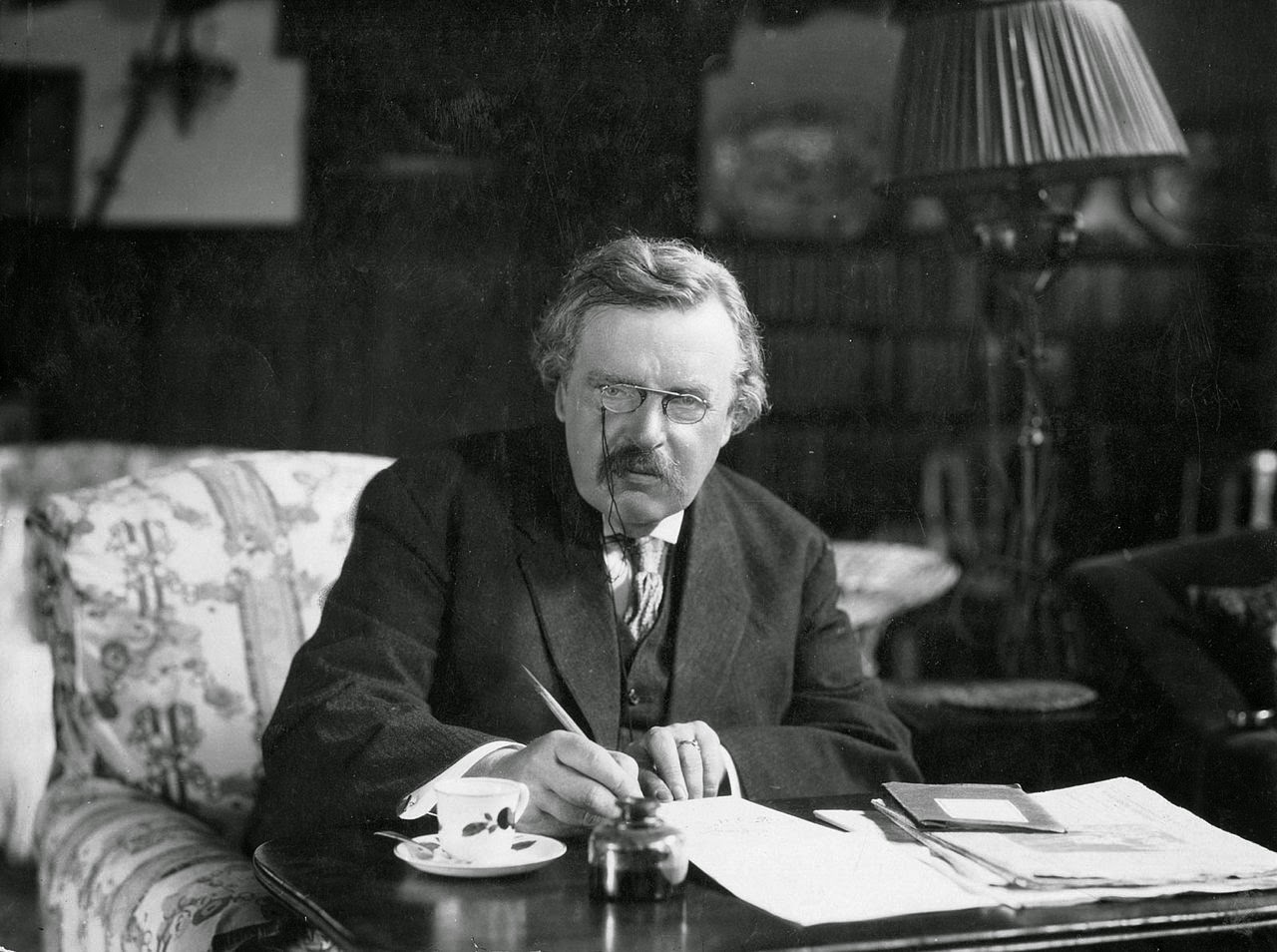 The other day, on Twitter, there was some discussion with regard to the merits of G.K. Chesterton and his relationship with Neoreaction ,with some negative comments made with regard to his economic ideas.

G.K.C was, like Mencken, a brilliant wordsmith who signature style was to use a paradox to illustrate his ideas. The problem with being a brilliant wordsmith is that people frequently see your work as good literature instead of looking at the ideas incorporated in them and praise your style instead of your content.  Mencken, for example, is seen as a humorous political journalist, instead of a fierce critic of Democracy. Good writing , then, can paradoxically obscure the point of your argument instead of augmenting it. As such, G.K.C is frequently seen as a man of letters instead of a serious intellectual force.

His work on St Thomas Aquinas, written after reading only four books on his subject matter, is considered by many serious scholars of St Thomas to be the best ever book written about him. Etienne Gilson had this to say about him;


For many years I have studied St Thomas and written on him and a now a journalist writes a better book about him than I have!

This isn't praise from the peanut gallery. The subject matter was hard and his mastery complete, and anyone who thinks Chesterton is a lightweight is seriously mistaken. He was one of the first to see the problems that modernity would cause to Western Civilisation, he saw the problems of capitalism without embracing socialism, he argued against the female vote, against eugenics and in fact, many of his positions taken in the early 1900's would be quite compatible with a lot of Neoreactionary ideas. Surprisingly, as I found out a few days ago, he even gave the young Eric Blair one of his first breaks.

But to be fair, Chesterton was also a man of his times and, in my mind, he was biased towards some of the causes he took on. Orwell's criticism of him , especially his "Catholic uber alles" approach,  blinded him to some of the real problems in Catholic countries and has some legitimacy. Furthermore, his optimisitic view of human nature blinded him to some of the realities of it. Operating within the Belle Epoque, in a civilisation which had peaked, and in a society which was mannered and well behaved (but with a large underclass) it would have been easy to have absorbed some of the progressive Kool-aid unthinkingly. It is interesting, that as his years progressed, he seemed to lose some of that optimism with regard to human nature just as Orwell began to lose some of his belief in atheism.

Even though he was one of the huge influences in my life, I did find myself disagreeing with him on some issues, particularly with regard to his ideas on Distributism. Firstly, two things need to be distinguished, the principle of Distributism, which I supported, and the his implementation, which I didn't. Distributism is the notion that the wealth of the nation should be distributed as widely as possible in a society, not so much as everyone having an equal share as much it is as everyone having a reasonable bit. Chesterton was spot-on when he said;


The problem with too much Capitalism is not too many capitalists but too few.

Chesterton understood that unfettered Capitalism caused a concentration of it in an economic elite who's sole elitist virtue was the capacity to make money. The problem is that this elite then gained an disproportional representation in the political and cultural process by sole virtue of their economic success. The meta-economic consequences of this aren't hard to gauge. In essence, he and Belloc, were the forerunners of the Ordoliberal school of thought.

His is ideas for the implementation of his Distributist policies, in my opinion, rested on the pastoralist utopian ideas which are frequently found amongst many conservatives who want to "escape to the country" and return to idealised primitive conditions. Despite years of campaigning, his ideas on Distributism gained little traction in the Anglo-sphere but it needs to be remembered that he was competing with another more publicised alternative which was intellectually easier to grasp (yet wrong) amongst the recently enfranchised prole masses.

In fact, perhaps one of the best implementations of Distributism is in Germany, where the concept of the Mittelstand has been aggressively pushed. This is thanks to the work of the Ordoliberalists.

The point here is that while Chesterton was wrong on some points he was a serious intellectual force and should not be dismissed lightly especially amongst Neoreactionaries. He had to work out many of his positions on his own and in an age which was far more optimistic than our own. He did not have the experience of the 20th Century, which was then a bright future, to balance some of his ideas and assumptions. For some of us, if it is that we can see further than he did and with greater clarity, it's because we stand on his shoulders and have benefited from his labors. He deserves a lot of respect.

Posted by The Social Pathologist at 10:56 am 3 comments: