Too much flesh, not enough class.

Summer in Australia is a feast for the lecher but a famine for the aesthete. I'm by no ways a prude but I must admit that I find that excessive displays of flesh rather off-putting. Not so much for the display of flesh itself, rather what it tends to signify of the barer. Others may disagree, but I've tended to notice that the girls that bare the most are usually either dull or morally unscrupulous, both undesirable features.

Most women usually take great care of their appearance: They want to appear attractive. People are visual creatures, and the choices a woman makes with regard to fashion, determine what features she wishes to bring to attention or accentuate. A woman who walks around with near exposed breasts and a skirt that barely covers her bottom is going to send the signal to men that she wants to appear as sexual, in a way that a woman covered head to toe is not. Still its not just an issue of display of flesh, display of form should be considered as well. A skin tight jump suit can be as erotic as baggy track pants are not. A woman not wishing to appear as sexual would make choices which will leave something to the imagination while still accentuating her femininity. 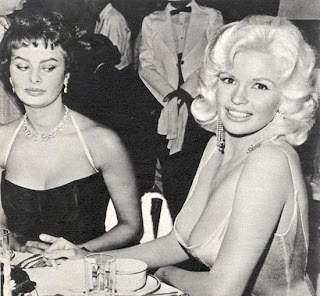 Jayne Mansfield was endowed with enormous breasts, which she unashamedly displayed. She was cognizant that they were her main attraction and she deliberately flaunted them. Apparently she could speak six languages and purportedly had an IQ of 163 but who would know. She complained that people did not want to know about her other attributes, while at the same time emphasising her breasts. She plied the skin trade for all that she could get, arranging for "wardrobe malfunctions" when they would be most noticed. She deliberately pushed the boundaries of good taste in order to expose her "attractive assets". As her career started to nosedive, her efforts at notoriety doubled finally posing in Playboy as a centerfold. She deliberately cultivated an image as a sex symbol; a monodimensional personality. Her personal life was a wreck, she married five times, was an alcoholic and died tragically in an automobile accident. Overt sexuality: Low class. Notice whom she is sitting with; much more classy.
Posted by The Social Pathologist at 8:03 pm 2 comments: