Gentlemen, Everything is tottering! 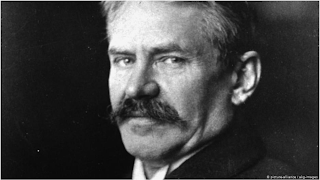 Protestantism gets a lot of grief in reactionary circles especially with regard to its relationship with liberalism and the modern world.  And I personally feel that a some of this criticism is quite justified. However, I do think that many critiques of Protestantism miss the fact that it seems to have "handled" modernity in a way that Catholicism wasn't able to.

In order to keep this post manageable, I'm going to define modernity as the sociopolitcal environment that has come about from the implementation of ideas of the Enlightenment. i.e. contemporary society and political state.  The distinguishing feature of modernity is the legitimisation and autonomy of the secular.

From the outset, Catholicism has had a problem with this state of affairs. UntilVatican Two, it could be safely said that it's aim was to reintroduce the Church's position in society that it had assumed in the Middle Ages. i.e. A complete involvement in every aspect of life to the degree that it felt it was appropriate. Any "secular space" in such a schema was really nothing more than "light touch" Catholicism. There was no true secular space in such a society nor can there be one where the faith is "integral" to it.

However, the ages of faith were as much a condition of temporal contingencies as they were of religious devotion and Modernity sideswiped Catholicism because it didn't understand this fact. The Printing press, large scale commerce, industrialisation, steam power and urbanisation were as toxic to its medieval preeminence as were heretical ideas. Modernity inherently generates secular spaces and the problem for Catholicism is that it doesn't know how to deal with secularity.

The other problem with Catholicism is that it has one model of "holiness".  Good Catholics are those who spend a lot of time practicing Catholic asceticism which involves an effective withdrawal from the world. However secular competence involves spending more time in the affairs of the world. The result is that the more "holy" a catholic, the more "aescetic" they are and the less secular they can be. i.e. Good Catholics spend lots of time in Church like affairs, bad Catholics spend time in the affairs of this world. Hence Catholicism's paucity of lay saints.  This may also go a long way to explaining the inefficiency of many Catholic secular institutions.

At the dawn of the 20th Century Ernst Troeltsch was one of the foremost public Protestant theologians. Unfortunately, he seems to have been mostly forgotten during most of the 20th Century, though recently there has been a resurgence in his thought. One of his areas of interest was in the relationship of Protestantism and Modernity. He was also a fair and sympathetic critic of Catholicism and incidentally, the next door neighbour of Max Weber.  His book Protestantism and Progress deals with this subject explicitly and I thought it would be worth to jot down a few of my thoughts on it as Troeltsch has several interesting ideas.

Firstly, Troelstch does not see a direct link with Protestantism and Modernity, the relationship being far more complex. Troeltsch, unlike many Catholic scholars, situates the origin of Modernity in the Renaissance humanism of Italy and regards early Protestantism as the continuation of the Middle Ages and anti-Modernist. The early Protestant division, Lutherism and Calvinism initially compete as alternative "churches" to the Catholic Church. It's approximately two centuries after the division that the Protestantism starts to fully develop along the lines of its doctrinal innovations and begins to rid itself of the habits of Catholicism.

Secondly, Troeltsch argues that Protestantism develops along its doctrinal lines and emergence of personal conscience and self-sanctification through the pursuit of vocation enable it to engage the world in a way that Catholicism could not. Protestant "vocationalism" is able to Christianise the world by getting into the thick of it.


...while Protestantism has furthered the rise of the modern world, often largely and decisively, in none of these departments does it appear as its actual creator. What it has done is simply to secure for itgreater freedom of development and that, moreover, in the various departments in very various ways ; and besides, the action of the different Confessions and groups has differed  in strength and direction. All it has anywhere done is to favour, strengthen, colour, and modify the course of the development, while in some cases it maintained and even rein forced the opposing influences drawn from the Late-medieval view of life


...religion is really derived from religion, and the results of its influence are really, in the first place, religious. Religion becomes a power in ordinary life only by taking up civilisation into itself and giving it a special direction. But it always itself remains distinct from this civilisation ; it is always more a formative than a creative force.

Protestantism is able to "capture" modernity and modulate it according to its particular denomination. In the case of the Amish it is a "backwards" force, while in the case of the Calvinists it was able to develop it along Christian lines in a "forward" direction.

Thirdly, Troeltsch recognises--like much of the reactosphere--that the weak point of Protestantism is its individual subjectivity which is able to ditch the theological doctrines which enabled it while maintaining the habit of them. Protestantism while being able to engage the world also has the dangerous propensity to become part of it and in the end undermine itself.


Another point which has to be taken into account is that the inner ecclesiastical structure of the Protestant Churches, and especially of Lutheranism, is considerably weaker than that of Catholicism, and therefore when con fronted with the modern world of ideas, has less resisting power than Catholicism.


Here the essentially Protestant basis of this movement is clearly evident, the transformation of the idea of freedom and grace into the ideas of the self -directing personality and a spiritual fellowship having its roots in history, all on the basis of a theism which has taken up into itself the idea of immanence. Moreover, this modern religious temper, in a thousand various modifications, has been so thoroughly absorbed by large portions of modern Protestantism, that the latter can scarcely be distinguished from the former. But it is equally unmistakable that modern religious feeling is in other cases dissatisfied with this, after all, ultimately Personalistic idea, and under the sense of the iron uniformity of natural law, of the world as a monster devouring all humanity, or, on the other hand, of the aesthetic glorification of the world and cult of individuality, tends towards ideas and feelings which are radically pantheistic, pessimistic, or, again, absolutely revolutionary, aiming blindly at producing some change or other. And where this spirit prevails, all relation to the practical, political, economic, and technical side of our civilisation is often entirely forgotten.

Troeltsh seems to recognise that Protestantism, in practice is a spectrum from the religiously sincere to those with a habit of it only. When Protestantism is "good" it is able to Christianise modernity, when Protestantism goes bad, it becomes an anti-civilisational power.
Posted by The Social Pathologist at 11:24 pm 3 comments: