Herman is Hottie whilst Dagfin is a Dud. 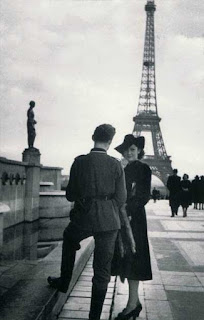 Appropriate to my recent posts on the relationship of fascism to masculinity is the relationship of the women in the countries occupied by the Nazi's and the invading soldiers. The other day I purchased a copy of Keith Lowe's excellent (if thoroughly depressing) book, Savage Continent, a book about the violence and killing that occurred in Europe following the end of the Second World War.  Lowe has an interesting passage in the book where he presents some data on the degree of collaboration between some of the local women and the Nazi's.

Many women across Europe embarked on such relationships with Germans during the war. They justified their actions by saying that "relationships" based on love' were 'not a crime', that 'matters of the heart' have nothing to do with 'politics', or that "love is blind'.  But in the eyes of their communities, this was no excuse. Sex, if it was with a German, was political. It came to represent the subjugation of the continent as a whole: a female France, Denmark or Holland being ravished by a male Germany. just as importantly, as I have already mentioned in Chapter 4, it also came to represent the emasculation of European men. These men, who had already shown themselves impotent against the military might of Germany, now found themselves communally cuckolded by their own womenfolk.

The number of sexual relationships that took place between European women and Germans during the war is quite staggering. In Norway as many as 10  per cent of women aged between fifteen and thirty had German boyfriends during the war. If the statistics on the number of children born to German soldiers are anything to go by, this was by no means unusual: the numbers of women who slept with German men across western Europe can easily be numbered in the hundreds of thousands sands.

On the whole European women slept with Germans not because they were forced to, or because their own men were absent  or because they needed money or food - but simply because they found the strong, 'knightly' image of the German soldiers intensely attractive, especially compared to the weakened impression they had of their own menfolk. In Denmark, for example, wartime pollsters were shocked to discover that 51 per cent of Danish women openly admitted to finding German men more attractive than their own compatriots.

Nowhere was this need more keenly felt than in France. In a nation where the huge, almost entirely male German presence was matched by a corresponding absence of French men - 2 million of whom were prisoners or workers in Germany - it is unsurprising that the occupation itself was often seen in sexual terms. France had become a 'slut', giving herself up to Germany with the Vichy government acting as her pimp. As jean-Paul Sartre noted after the war, even the collaborationist press tended to represent the relationship between France and Germany as a union 'in which France was always playing the part of the 'woman'.


There are several interesting facets to this passage. Firstly, fraternisation will occur wherever young people meet, however this was not normal fraterniation.  The women were fraternising with men who had just subjugated their country and shipped off their men to prisoner of war camps. Secondly, it's interesting to see how the traditional explanations were, even then, being used to justify the behaviour of women. No one, it seems, could bear the thought that the reason why so many women slept with the men was because the Germans were hot whilst their menfolk were not.

Just to put this into perspective, the wiki site on war children estimates the number of babies born to German fathers  (i.e occupiers) in France at between 75,000-200,000. Between 10,000-50,000 in Holland.  Whereas a full ten years of occupation in Germany by the allied forces produced 66000 war babies. I know the figures are very rough but it would appear that the Germans had the overwhelming advantage in more than just armor when they invaded France.

One of the factors which may be correlated to the preference of Danish women for Germans may reside in the fact that the Germans had far more martial spirit. The Danish Army lost 16 killed trying to defend Denmark. Guess their women didn't really find them that sexy after that performance.
Posted by The Social Pathologist at 11:15 pm 21 comments: