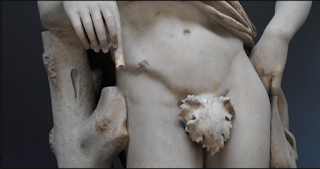 But this understates the difficulties. That Christianity has often been seen as another form of Platonism, even worse in that it seems to give such an important place to punishment and sacrifice, is not just a function of the denseness or  the ill will of the critics. The Gospel message doesn't fit into the categories which have come down to us through ages of human history, and is recurrently being twisted, even by its own adherents, to make sense in these terms.

This means that there are clearly wrong versions of Christian faith. But it doesn't mean that we can give a single right version to replace them. The hold of these categories which come to us through our history, including that of our pre-Axial religious life, is so great that we have trouble thinking through what the Christian revelation means. The wrong categories often come more "naturally" to us. So we operate with a certain amount of unclarity and confusion. This is the condition of doing theology.

Perhaps the most obvious area in Christian culture where the tendency for excarnation has been felt is in the Christian approach to sexuality.  Taylor doesn't devote a great deal of his book to the subject and the  impression I get is that  he is far more "liberal" than I am, but it would be a mistake to think his critique of excarnation is an attempt to "liberalise" Christian sexual ethics. Taylor does not go into an extensive historical treatment of the subject but simply reminds the reader of the the hostility that Christianity has towards sexual desire. No matter how the act is realised, there always seems to be an element of sin associated with it. This continual association of corruption with the desire itself resulted in a Christianity that was nearly always hostile to its expression. As this blog has mentioned before, it was only after two millennia of Christian thinking that unitive element of sexual desire was recognised as legitimate, and even then conditionally.

Whatever its reasons, Christianity's hostility to sex has resulted in theological treatment which links sin to its expression in nearly all instances, even within marriage. However this position  creates an anthropological vision which regards mans sexual nature as evil.  Therefore the good man in such a vision is a man who has literally "chopped off" his sexual nature. Now some defenders of the traditional position will argue that it is important to control an appetite as rowdy as sexual desire due to all the damage it can do, but difference between regulation and suppression is a matter of degree, and the Church regulated hard.

Yet, sexual desire is a constitutive element of human nature so the traditional Christian opposition to Eros was an attack on the human constitution. To quote Taylor:


And in this, it follows much of Christian sensibility over the ages, which has also own uneasy about many aspects of human flourishing, has been uncertain and ambivalent about them. Take sexual fulfillment for instance. For centuries, the midiaeval church taught that sexual intercourse was essentially to be directed to procreation, and you shouldn't enjoy it too heartily even then. The Reformers tried to rehabilitate sexual relations among married couples, but in practice the emphasis on its being carried out to the glory of God put a damper on sexual pleasure....... Now that there is a tension between fulfillment and piety should not surprise us in a world distorted by sin, that is, separation from God. But we have to avoid turning this into a constitutive incompatibility. This, however, is what both exclusive humanism on one hand, and the sensibility of much conservative Christianity on the other, tend to do. The first take for granted that what is dedicated to God must detract from human fulfillment. The second are so focused on the denial and restriction of desire that they easily fall into a mirror image of the secular stance: following God means denying yourself.

It's hard to beat the beast when you're both playing the same tune.

The problem with this approach is that it seriously impaired the Christian understanding of sexuality and created a state off affairs which many found repellent and pushed them into the secular world.


But there is another charge against the aspiration to transcend, not just futile and self-defeating, but that it actually damages us, unfits us for the  pursuit of human fulfillment. It does this by inducing in us hate and disgust at our human desires and neediness. It inculcates a repulsion at our limitations and poisons the joy we might otherwise feel in the satisfactions of human life as it is.

Here the enemy is not so much Greek polytheistic fantasy and Greek philosophy but Christianity, especially in its Augustinian forms. Here Nussbaum takes up one of the central themes, one of the constitutive polemics of our secular age, as I am trying to describe it. Hatred at Christianity for having defamed, polluted, impure ordinary human sensual desire is one of the most powerful motivations which impelled people to take the option for an exclusive humanism once it became thinkable.


What Christianity tried to do--especially Catholicism--is refashion Eros into a "platonic" version of itself, stripping the carnal element of it to its bare minimum and hence deforming it in the process. It tried to create sex without sexuality. It is also why--for the average person--it really has lost all authority of matters of sexuality. It speaks of sexuality in a way that the common man cannot relate to.

To consider what I mean take the following from commentator Chent in a recent post.


"Rape is sex without consent, and it can definitely occur in marriage."

Yes, a definition that is not found in the Bible or the tradition of the Church but it is the standard feminist definition.

The Bible never talks about consent. And even less about consent being the basis of the morality of sexual intercourse. The basis is marriage. [ED]

Of course, this does not mean "sex on demand" at any time or place". Nobody said that. But constant denial of sex is a serious sin and a break of marital vows. "You must not deprive each other, except by mutual consent for a limited time, to leave yourselves free for prayer, and to come together again afterwards; otherwise Satan may take advantage of any lack of self-control to put you to the test." (1 Corinthians 7,5)

Don't get me wrong. Of course, I am against a husband forcing himself on his wife. Not because it is rape (it is not, according to the Bible), but because it is aggression. Because an evil is not an excuse to commit another evil.

And even here Chent is justified in his charge. Because the notion of factoring desire into the analysis of the situation is outside the traditionalist Christian tradition.  But this creates a tension between human nature which instinctively grasps the importance of Eros, and the Church's legalistic tradition which ignores the element.

What Christianity it tried to do is create a sexuality without Eros: it's teaching on the subject clashing with human nature. But because Christianity has been unable to address issues of sexuality convincingly within its own tradition, external non-Christian forces have filled the gap and thereby gained legitimacy.


*Quotes from Taylor's Secular Age.
Posted by The Social Pathologist at 11:32 pm 23 comments: