Taking on the Cathedral. 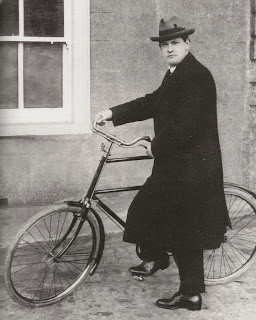 The innocuous looking guy to the left has just been recently voted one of Britain's greatest ever foes.

The task facing him was not inconsiderable. How do you beat the worlds greatest superpower with nothing more than a few guns toted by eager youths, a lot of local good will and nothing much else? And yet that is what he did.

Michael Collins is arguably one of the greatest commanders in history. His greatness lays not in his ultimate achievement, rather, in the obstacles he had to overcome to attain it. Obstacles that would have overwhelmed nearly all other mortal men. It was the ultimate challenge; Man vs British Empire.

The task facing Collins was superhuman. How do you secure cure the independence of Ireland from a stubborn British who refuse to yield it?  Collins starting position was tactically woeful. The Irish Republican cause was bedeviled from the outset, by spies, informers, splinter groups factional groups and, of course, the presence of the British Army which at that time was the world superpower. How Collins managed to overcome all of these obstacles is a matter of legend and instruction. He is considered the father of modern urban guerrilla warfare. Mao claimed to have studied his techniques.

The secret to Collin's success lay in his intelligent unconventionality. Collins never did what the enemy expected him to do,  and by outsmarting his enemy he was able to get the British out of Ireland with next to no resources.

Collins serves as a sort of example for the modern manosphere movement, a movement which appears to be gaining some notice amongst the mainstream media. Over the past few months I've noticed a gradually increasing frequency in the media words associated with the mansophere such as alpha male, neg and game. It appears the mansophere is being noticed without acknowledgement and as  the media gives the manosphere more time, sooner or later it is going to be judged by its conformity to the media's program. I suppose that some manosphere writers would welcome the free publicity that comes with media exposure. But it's a poisoned chalice. The liberal media-arts-education complex (a.k.a the Cathedral) has a cultural vision which is profoundly hostile to the underlying ethos of the manosphere. As such, its engagement with the manosphere will eventually be on hostile terms. Those who chose to take the bait (i.e media publicity) are likely to be destroyed.

The official Cathedral line is that it provides for a forum for dispassionate public debate, whereas Cathedral Operations are nothing of the sort. The Cathedral's role is that of culture management and it does it through exploiting the sheep like qualities of the people.  It manipulates public opinion so that the proletariat respond through Pavlovian conditioning in the way which it wants it to. The aim isn't to present a logical argument as it is to enforce an emotional association. For the media have long ago recognised what Jonathan Haidt has recently preached, namely ,when it comes to Joe Average, it's the emotional tail that wags the rational head and not the other way around.

It has a variety of means at its disposal  but the main point is that when the media wants to push a certain line it does so by associating the desired message with positive feelings. On the other hand, when the media wants to ostracise  something it does it by the process of negative association. For example, when the gay marriage agenda wants to be pushed, media presentations of gay marriage will be done in such a way as to elicit positive emotions with the message. Supports will be attractive and highly articulate and socially desirable. Detractors of the gay marriage will be presented negatively. It's classic Goebbellian psych-ops.  The aim isn't to present a logical argument as it is to enforce an emotional association and thereby influence public opinion. Glee, for example, is strong on the song and dance but very little emphasis is made on the gay bar scene; the aim of the producers is to associate gayness with happiness and not disgust.

The machine exists to keep re-enforcing a certain cultural message.The machine is now so well oiled an any person wanting to take advantage of the "publicity" offered by the Cathedral soon becomes a unwitting victim of it if he does not pursue the politically correct line. The Cathedral will promise him a forum where he can get the widest audience whilst setting him up for failure in front of that same audience. The Cathedral is able to do this because, traditionally, the technical means of media dissemination was able to be tightly controlled. And by controlling the dissemination of information, it controlled the public square. Fighting it through the public square means fighting it on the terms set by the Cathedral. It's a recipe for failure.

And lets not forget what the Cathedral can actually do. It can ruin a man's reputation. Wreck his career.  Make him lose his job thus plunging him into poverty and place his marriage under enormous  strain. It can destroy his business. Alienate from his friends. Make him into a social pariah. The point is that the Cathedral is a machine that exists to support its friends and destroy its enemies, it's claim that it is a space for the exchange of ideas is merely a guise.

Michael Collins recognised that the way to take on the British Army was not to take it on directly (which would be suicidal) but to engage it on his terms. The way to fight it was unconventionally. Playing the traditional media's game is to engage it conventionally. Thus, in my opinion, the manosphere should discount any advice about courting mainstream publicity and resist it as best as it can. The aim is to engage in cultural guerrilla warfare. The medium through which this warfare must be fought is the internet, a forum where the media has virtually no control on the subject matter.

The free for all environment of the internet and its distributed nature makes "enforced" consensus extremely difficult. Ideas can't be policed easily. The Climategate story, for example, was all over the internet despite the mainstream media's efforts to quash failure to pick it up.  History will see it as a watershed event.The advantage of the internet is that everyman can potentially reach a world wide audience. Every blog post an opinion piece and every combox discussion a moderated thread. It's true, that for most bloggers and web pundits, their influence will be minimal on an individual level (though there are exceptions)  but taken in total, the manosphere can exert enormous cultural effect outside the control of the cathedral.

Another problem for the Cathedral is any attempt to take down one of web pundits instantly generates more web traffic for the pundit and his cause. This presents a problem for the cathedral. Whereas previously they could isolate an opponent and present the pundit to the public in a manner of the Cathedral's liking, it now cannot regulate what the public actually reads at pundit's site. The pundit actually gets a fair hearing.  The aim then, if media attention is inadvertently gained, is to engage the media of terms of your own choosing. Do not give a media interview, instead let the media interview you on your own blog, that way the media cannot manipulate your public image or selectively misquote you. The worst thing to do is go "live " in an environment where they control what gets said, whom you are associated with  and whom your opponents are. Roosh V's foray onto Ukrainian television was a classic example of what I'm  talking about and a close run thing.


It started normal enough where they asked me general questions and then they started bringing out "surprise guests" which completely caught me off guard. They had me thinking "How the fuck did they find these people??!"

............I sat in the chair and had the lights on me, the audience on me, and the host and the celebrity panel and so on, I felt quite calm and just focused on answering the questions while not letting them paint me [ED] as someone I was not.

The point is that the way to attack the cathedral is to attack it from outside and on your own terms. Playing the conventional media game only makes you its pawn or its victim.

Posted by The Social Pathologist at 10:30 am 32 comments: