When leaders fail, new leaders are projected upward out of the eternal spirit of France: from Charlemagne to Joan of Arc to Napoleon, Poincaré and Clemenceau. Perhaps this time I am one of those thrust into leadership by the failure of others. 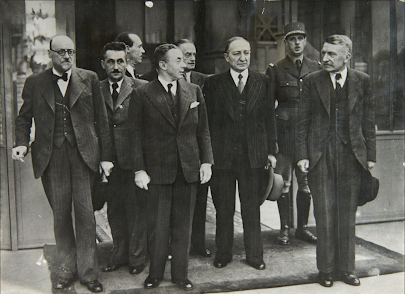 The First World War resulted in a pyrrhic victory for France.  During the course of the war, it lost about one and half million men which equates to roughly one thousand men a day, about ten percent of the male population. Six and half million men were wounded of which over a million were mutliés, i.e. maimed or disfigured. The experience of war had deeply traumatised the  country and and had and had changed its national  temperament, similar in the way the U.S. was affected after Vietnam.  The country's strong sense of militant nationalism gave way to a malaise. Whereas before the war, the military were held in esteem, the experience of war and sense of national grief lead to a loss its prestige and an air of pacifism and hedonism took its place.

The needs of war temporarily put aside the national conflict between left and right, which gradually asserted itself again with the onset of peace. Further complicating matters was the relationship between the religious and the secular, which while still tense, was not as poisonous as in the pre-war years. And even within the French Catholic Church there was a broad division between the traditionalists and the liberals.

With regard to the French Left, and I'm painting in broad strokes here, who were the the lackeys for soviet communism, they worked to co-opt pacifistic trends for their masters advantage. Through economic and industrial sabotage the damaged the french economy, policy and national will.  There loyalty was primarily to a Soviet France and they danced to the tune played by Moscow. Their loyalty to France was conditional on soviet directives. and when the soviets wanted them to support Germany they did.

The Right in France were an all-together different beast. The main right organisation was Action Francaise.  It was pro-monarchy, pro-France, pro-Catholic and anti-Left. Led by Charles Maurras, a brilliant writer and journalist, he had dubious distinction of advocating a Catholic France while being totally contemptuous of religion.  Despite regarding belief with disdain, Maurras regarded it as valuable because of its social utility. He supported Catholicism because it was the historical religion of France, but but to him this was just an accident of history, and if France had had an Islamic tradition, he would have supported it as well.  The fact that the leading advocate of the largest right wing organisation in France was openly contemptuous of religion did bother some  of the religious, but that didn't stop many clergy--some of them at extremely high levels of the French church-- from supporting it and singing its praises.

The picture that I'm trying to paint is of a divided, depressed, hypocritical and wounded society which had deep social, economic, moral and religious problems. Two books which deal with the subject matter well are Eugen Weber's The Hollow Years which tackles the subject from a sociological level, and Yves Simon' brilliant book, The Road to Vichy which tackles it from a moral one. Simon's book is better, in my opinion, in understanding the near utter corruption of France's cultural institutions and population. A good summary of it can be found here.

The bottom line is that the France was a deeply traumatised country which seemed to want to forget the war and enjoy itself, all the while avoiding the menacing reality on its eastern border. What also strikes you, when you read the biographies of De Gaulle, is just how "culturally" different he was both to his contemporaries, and outside the temper of his own times. In many ways he was a throwback to values from before the war--though from the avant-garde* conservative element -- possessing a sense of realism that was lacking in many Frenchmen.  While he was not a "popular" fellow, he had superiors who recognised his intellect and abilities and ensured his progression through the ranks. By the eve of the war in France, he was a brigadier general commanding a tank division, attaining his rank from success in armoured combat. His success in battle earned him a promotion as the government minister. Even in government he was an oddity, because when the French finally capitulated against the Germans he decided to fight on.

The point that I'm trying to emphasise here is that De Gaulle  was an outsider and not someone  cut from the same prevailing cloth that made up the French governing classes of the time. He possessed a different set of values and this is the key to understanding the man and his subsequent actions.

It is very important to understand that the French ruling class of the 1930's--both right and left--was rotten.  De Gaulle was an outsider, and his rise through the ranks was not political but driven by the force of circumstances which highlighted competency in a time of crisis and rendered "political" skills inconsequential . And when I reflect on his rise, it always strikes me as remarkable how this oddity, this man who was different, ended up being in a position where he were he could with legitimacy speak for a France that did not want to capitulate.

There were Frenchmen who wanted to fight but it appears to be that there were none in Government. What further emphasises this point, it that when he put out his appeal for men to join him in England, not one intellectual, politician or senior diplomat wanted to join him.  As Don Cook, in his biography of him wrote:

In those early days, it was not men of experience or leadership, it was not the intellectuals or politicians or administrators or serving officers who were the first Gaullists and rallied to the Cross of Lorraine. They did not come from the châteaus or cathedrals, but from the parish churches and the synagogues, the French of the Paris Métro, the fishing villages, the factories, for whom all was clear and simple.

By and large the French educated and administrative classes were rotten and De Gaulle seemed to be the last vestigal element of what was good in it. I'm not trying to be melodramatic here but the facts speak for themselves. As De Gaulle took off from french soil for England, Churchill's comments were close to the mark.

When De Gaulle arrived in England he was looking for an officer or official to serve under. He wrote to various French officials who could of assumed the role but none replied. Then he realised he was on his own. He didn't seek power, it was thrust on him. Realising he was on his own he made the decisive choice:

It was up to me to take responsibility for France

All his subsequent actions can be understood as the application of his principles to the custodianship of France. The reason why he baffled and infuriated his allies is because he was not like them.

*I think a point that doesn't get emphasised enough is just how well read and intelligent De Gaulle was. What really surprised me as I looked into him more deeply, is just how intellectual actually he was and just how influenced he was by the small coterie of French dissident Right thinkers who were repelled by Action Francaise and yet did not drift to the Left.

Posted by The Social Pathologist at 10:10 pm 14 comments: