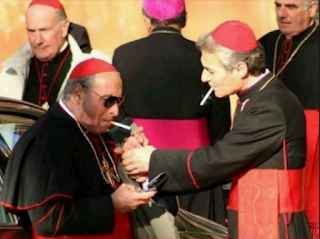 Back to our regular programming.

Warning: for those of an atheist bent this is a religious post.

It's this blog's primary contention that the civilisational failure of the West has primarily come about because of the collapse of the Christian religion. While it is true that there were other factors in the formation of Western Civilisation, Christianity provided the unifying foundational principles of it. Pagan and other traditions were incorporated insofar as they were in conformity with the overarching Christian principles.  By the end of the 19th Century, Western Civilisation was the dominant power of the planet. However by the end of the 19th Century the warning signs were becoming apparent and  the smart guys saw that Christianity was beginning to fail, and they were under no illusions that the decline of Christianity would require a new "value system" to replace it. Marxism, Fascism, and Liberalism were attempts to replace what was lost. We're still groping for meaning despite the rivers of blood.

It is my opinion that there will be no restoration with some kind of  Christian restoration.  However, any restoration of a Christian West is going to have to avoid the mistakes of the past and therefore it's necessary to have a good hard look at where things went wrong.

Catholicism's mode of failure is different:  Unlike Protestantism, Catholicism affirmed the objective nature of morality--as affirmed by the Magisterium--but was unable to deal with the problems because of the institutional inertia of the Church. And it's this inertia that has allowed Modernist movements to run rings around it when changes have occurred in the cultural environment and inhibited any dynamic response. As it stands, the Catholic Church is basically a defensive organisation and is incapable of cultural offense.

The Benedict option, for example,  is a typical of this mindset. In my opinion Benedict XVI has one of the sharpest minds out there, but even with all of his erudition and spirituality the best response he could give to the problem of Modernity is to curl up in a ball and to ride it out: He had no plan to take the bastards on.

Even Catholic Integralism, with all of its intransigent militancy was in effect a militant a neo-Luddite movement which, unable to beat the modern state,  aimed to co-opt it to secure it's aims.   The paradox of Integralism is that the apparatus of modernity and it's underlying philosophy, i.e. the modern state and its control over the interior life of the individual,  is the vehicle by which modernity is to be fought. The approach is contradictory and paradoxically furthers the transmission of modernity. It's an own goal! A weak religion does not become strong by co-opting a strong state, it simply rides the tiger of the State. It's also why the State, when it throw the rider off, rapidly reverts to modernist form. Cue Spain and Portugal.

As I see it, the institutional inertia of Catholicism is a product of both in its structure and it's mindset.

The Church understands itself of formally being composed of both the clergy and the laity but in reality the Church operates on a notion of a directing clergy and a passive laity. As some wag said, the priests do the thinking but the laity is simply meant to pray, pay and obey. Passivity is the feature of the laity, or as Pius X famously stated:


It follows that the Church is essentially an unequal society, that is, a society comprising two categories of per sons, the Pastors and the flock, those who occupy a rank in the different degrees of the hierarchy and the multitude of the faithful. So distinct are these categories that with the pastoral body only rests the necessary right and authority for promoting the end of the society and directing all its members towards that end; the one duty of the multitude is to allow themselves to be led, and, like a docile flock, to follow the Pastors

In many ways this "structure" is like that of the old Soviet army, individual action is only permitted from higher up and initiative is frowned upon. Maurice Blondel recognised this problem and called it monophorism.  Apart from killing all spontaneity in the faithful, the problem with this approach is that any new challenge has it's locus of response in the clergy. But what the historical record and the recent sexual abuse saga have demonstrated is that even with something as offensive as child abuse the clergy was unable to respond appropriately. It had to be dragged kicking and screaming by a hostile media into instantiating an appropriate response. Unfortunately, as the historical record shows, this is a recurring theme in Catholicism across the centuries. The Council of Trent, for example,  may have been a resolute response to the rise of militant Protestantism but it was also a tacit admission that the Church needed to be reformed. The sobering thought here is that it took nearly the loss of half of Christendom to recognise this fact.

Why has  the clergy has found it so difficult to respond to crises effectively? There are obviously many factors but one to consider is the fact that the Church is the prototype for the modern multinational managerial organisation. The Church may be a spiritual body but its also a practical organisation which needs to be practically run.  It has an "organisational structure" which in many ways resembles a modern business. There is a strict hierarchical order of authority, much like in any modern large corporation, where the CEO calls the shots and everyone is expected to toe the line.  And the Church, just like the modern corporation has it's managerial class, and just like all multinational organisations suffers from bureaucratic inertia.  Understanding the Church's institutional response to the sexual abuse saga becomes a lot more easier to comprehend if you do from the framework of a bureaucratic imperative. Being obsessed with rules and regulations, preservation of position and prestige, procedure orientation instead of results orientated are key features of the bureaucratic mindset. A Pharisee is a simply a religious bureaucrat in whom the rules matter more than the effect that they are having.  His job is to maintain the rules even if they lead to totally absurd outcomes.  Just to make myself clear, the bureaucracy's obsession with avoiding scandal resulted in the total repudiation of the Christian teaching of Justice.

The other factor impacting upon the Church is how the Church understands Tradition, which has a direct influence on the organizational mindset. This is a huge topic but, briefly, in times of ossification Traditional is understood as an absolute expression of faith, whereas in times of renewal Tradition is understood as a contingent one. Rules are "strict" in conservative times and "liberal" in times of renewal.  Given the defensive position of the Church and its institutional nature,  the interpretation of Tradition has almost verged on the Spergy, with Tradition = literal Truth. The point here is that any innovation is almost automatically seen as heresy, therefore the even the ability to develop solutions even from within the framework of tradition is stymied by this mindset. Any novel doctrinal development is by definition anti-traditional and the object of pushback by the institution.

The combination of both bureaucratic and cultural inertia have resulted in the Church being unable to respond to the shifting cultural landscape bought about the impact of technology and population growth which was first really felt at the end of the 19th Century. It much like a saddler bemoaning that people don't ride horses anymore and insisting that they should continue to do so.

No one takes any notice, except the romantics who like riding horses.

Vatican Two was meant to be an attempt to break this mindset but it was poorly thought out and poorly implemented: the result being a mess. Yves Congar and Herni de Lubac may be have been great diagnosticians but I'm not sure they had the right therapy. Old fogey bureaucrats, attempting to look cool and relevant can never pull it off and the who thing looks silly and awkward. That's explains a lot of the silliness in the Catholic Church following Vatican Two. Still, there is a silver lining to the "faults" of Catholicism, the bureaucratic inertia meant the Church was resistant to the pozzification of it in a way that Protestantism wasn't. But it's no advantage in being right when no one is noticing and  sliding back into the same ineffective Traditionalism of the past just simply takes you back to square one.. A new way will have to be found to go forward but I'm not sure how that is going to play out.

Posted by The Social Pathologist at 11:37 pm 11 comments: