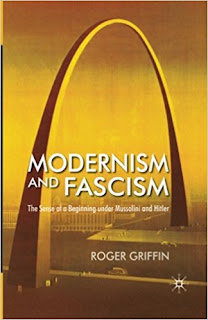 Two other books which I had to the pleasure to read and which complement Gregor's book are Roger Griffin's, Modernism and Fascism and, A Fascist Century. Once again, these should be staple texts of the Right.

Griffin made a bit of name for himself in the field in the early 90's with a book The Nature of Fascism. Modernism and Fascism is his attempt to attend to the deficiencies inherent in that book.  Griffin's unique viewpoint is that, unlike other academics, he tries to understand Fascism in the same way that Fascists understood it themselves. He is clearly no apologist for Fascism yet what's apparent in this book is just how novel this approach is in academia and the hostility he has earned as result of it.

Firstly, he defines Fascism movement as one which advocates Palingentic Ultranationalism. He has been criticised by Gregor on the grounds that the definition is not specific enough-- I agree, more on that later--but whereas Gregor gives an account of the intellectual development of Fascism illustrating how Fascism came about, Griffin focuses on why it did so.

Like Socialism, Griffin traces the origins of Fascism in cultural turmoil of the late 19th Century, when Christianity had begun to lose its hold on the cultural elites.  The culture of the late 19th Century with its materialistic capitalism and individualism slid society towards decadence. This and the pressing social problems of the times  disgusted many in society who felt that a "moral renewal" and a "cleansing of the filth", was required to alleviate the pressing social problems of the time. Two broad streams of thought emerged from the chaos, those based upon nationalism and those based upon international proletarianism. Both solutions were premised on the notion that the past was unrecoverable. God was dead and the Ten Commandments would no longer do.

Like Gregor, Griffin too, realises that Fascism was born of pressing moral problem which came about with the removal of the weltanschauung "sacred canopy" afforded to men by Christianity.  But it wasn't just the philsophical arguments that mattered, the whole progress of "modernisation" had profoundly uprooted European society so that by the late 19th Century, Capitalism and the ideals of the Enlightenment were being discredited by the experience of life.


MODERNISM: the generic term for a wide variety of countervailing palingenetic reactions to the anarchy and cultural decay allegedly resulting from the radical transformation of traditional institutions, social structures, and belief systems under the impact of Western modernization. These reactions were fostered by the growth of reflexivity and its concomitant, the progressive temporalization of history characteristic of Modernity, one consequence of which was the trend towards re-imagining the future as a permanently 'open' site for the realization of utopias within historical time. Modernism gained momentum in the second half of the nineteenth century when liberal, capitalist, and Enlightenment myths of progress lost the partial cultural hegemony they had attained during the French Revolution and early industrial revolution, with the result that the manifold changes that society was undergoing became increasingly identified by intellectual and artistic elites with decadence, so that modernity itself became a trope for degeneration (Modernity).

The important point that Griffin hammers out is that movement which became Fascism was essentially modernist, i.e. sharing many of the same philosophical foundations of Socialism.  However, where it differs from Socialism is that Fascism was more "Romantic," in that the fascists turned inwards into themselves find a  Dionysian "spirituality" which gave them the strength to live. This task was supported by numerous philosophers, artists, writers architects etc.


Marx believed that, unlike `bourgeois ideologies', socialism was not to 'draw its poetry from the past'; that is, it could do without myth and the aestheticisation of politics — though in practice it could not do without them, as all the regimes of 'actually existing socialism' have demonstrated. By contrast, fascism celebrated precisely such forces as the way to recreate a sense of reality, meaning, and subjective revolution. This can be seen in the title of Alfred Rosenberg's The Myth of the Twentieth Century, or Mussolini's declaration in his 'Naples speech' of 24 October 1922, only hours before the March on Rome, that


we have created our myth. The myth is a faith, a passion. It is not necessary for it to be a reality. It is a reality in the sense that it is a stimulus, is hope, is faith, is courage. Our myth is the nation, our myth is the greatness of the nation.

One of the points that Griffin successfully gets across is that Fascism was a revolt against the "mechanistic" view pushed by Marx--a view rooted in Positivist metaphysics. In many ways Fascism, and Socialism, provided an alternative spirituality--a political religion--to replace the one lost by cultural failure of Christianity. But the paradox being that it was ultimately a religion that found inspiration in the feelings generated by the self. It was a sort of malignant new age spirituality.

One of the other tropes that Griffin smashes is the received wisdom that the Fascists were anti-Modernist, and that by being so they were cultural brutes. While it is true, that the Germans were not as sophisticated as the Italians, the fact is that many modern artists put themselves in the service of Fascism which they quietly downplayed after the war. Philip Johnson, Mies Van der Rohe and Walter Gropius were all prepared to work for the Reich. The Fuhrer may have shut down the Bauhaus school but seem quite unconcerned with its influence in industrial and architectural design.  The fact is that while the Fascists deplored depictions of "degeneracy" in the arts, they were surprisingly tolerant of modernist modes of artistic expression. There was a huge battle in the Nazi party on the merits of German Expressionism, pushed by Goebbels, finally overturned by Hitler.

Mussolini certainly had no problems with modernist art, and actively encouraged it. Evola, for instance, originally started off with Dadaist ambitions, while Hitler seemed quite prepared to accept "non degenerate" Modernism. (.pdf)  The fact that Hitler found deformed depictions of form repulsive did not mean that he was anti-Modernist unless the appreciation and depiction of deformity is equated with Modernism. And this is not even touching on the enthusiastic embrace by the Fascists of technology and its application on all spheres of life. The idea, pushed by international socialists especially, that the Fascists were reactionary traditionalists trying to reassert themselves is quite simply false.

Of the two books, A Fascist Century is the easier one to read, and there is an interview in the end of it with Griffin which is worth the price of the book. Modernism and Fascism is a far harder read, lacks the focus of Gregor but is very impressive in the scope of its erudition and is meant as a more academic treatment of the subject. Its other problem is that it is written in academese and simplification of its language would ensure a far greater audience and easier grasp of its ideas. Still it is a book worth the effort and should be a foundational text of the Dissident Right.


Posted by The Social Pathologist at 12:22 am 7 comments: