Speaking of Spencer and of himself, Gottfried said, “I think it is probably a trick that history plays on thinkers. But I think you’re right—he says that I’m his mentor. I think I’m his reluctant mentor, I’m not particularly happy about it.” He sighed. “Whenever I look at Richard, I see my ideas coming back in a garbled form.”*


A few weeks ago Nick B Steves posted a image which attempted to define the boundaries of the Alt-Right, something I want to make a few comments on. 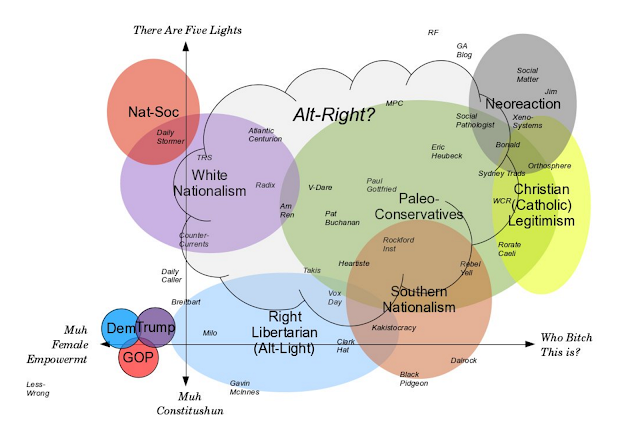 I want to start off by saying that this is not a dig at Nick, rather it's criticism, in good faith, of several problems that I see with it.

Firstly, Richard Spencer and his ilk own the Alt-Right brand. This ownership hasn't been conferred to him by anyone in particular, but the fact is that mainstream usage of words confers upon them their meaning. To be fair, the Spencerites have always assumed the title but now that the media sees Spencer as the official embodiment of the Alt-Right the mainstream usage of the word has become associated with him and his ideas. And the ideas are certainly not those advocated by Gottfried when he first raised the term.  Spencer, working with the media, have been able to twist its meaning.

What this means is that anyone who is opposed to mainstream "Conservatism" and who is opposed to Aryanism v2.0 needs to find another name to call themselves to stress that distinction in the public sphere. As far as I'm concerned the term, Dissident Right, is as good as any. It's also important for the Dissident Right to make a public disavowal of the Alt-Right, since the Alt-Right's main tactic--assisted by the mainstream media--is to be to claim other non-mainstream Right movements as their own. Given that some of the Alt-Right's positions give the appearance of being in agreement with the Dissident Right this tactic causes conflation errors amongst cognitive misers--i.e. most of the public--who associate all these movements as one.  The odium of Aryanism gets spread onto other movements by this mechanism and people like Gottfried have to spend their time defending themselves from beliefs that they don't hold.

Spencer might be a likeable, courageous and edgy guy, but his ideas and more importantly, the metaphysical garbage they bring with them, are toxic. It needs to be remembered that solution for left wing stupidity is not right wing stupidity and for a Christian like me, materialism repackaged as Aryanism v2.0 is stupid.

Secondly, what this image needs despite the graphic difficulty is a third (z) axis labelled Positivist and Trancedentalist, because this is where the serious ideological battles of 20th Century lay. Spencer's  vision is Positivist;  I'm not, therefore any "Right" that Spencer belongs to mutually exclusive to mine.

The Great Battle in Western Civilisation has been between Christian Transcendentalism and Materialist Positivism. Positivism got the upper hand about the time of World War 1 and has been reigning triumphant since. The major ideological battles within the 20th Century have been between the various positivistic factions and quite simply the argument about how to arrange the deck chairs of societal institutions misses the bigger picture of the ship sinking.  There is no survival of the West without a break from Positivism. Anybody who doesn't grasp this fact is arranging deck chairs.

I feel that the minimum membership criteria for inclusion into a Dissident Right which represents Western Civilisation should be:

1) A belief in the Truth.
2) An intention to calibrate act and understanding towards the Truth.
3) A belief in empirical data.
4) The belief in a Christian Transcendentalism, or at it's very minimum, a non-hostility towards it.

I want nothing to do with the Alt-Right and disavow them.

I belong to the Dissident Right.


*The article from which this quote was pulled  is a lot of rubbish in my opinion, but Gottfried's quote was good.

Posted by The Social Pathologist at 11:00 am 19 comments: