How it Works: Alcohol, the Sleaze Propellant.

Alcohol has many physiological effects on the human system, but it's well acknowledged that with higher doses of alcohol, the higher cognitive functions tend to be more susceptible to its affects. If we take our cognitive model of the female brain, we can see that under the influence of alcohol the weighting that the rational mind has in decision making becomes reduced. 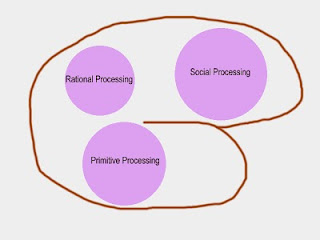 After a few drinks: 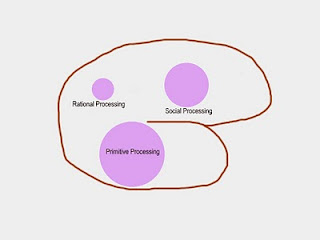 What we see here is that primitive and social process gains greater weight in decision making even though overall cognitive function has reduced. It also needs to be noted that social functioning, whilst it assumes a greater weight in the decision making, is actually diminished and hence concern with regard to the social consequences of our actions becomes diminished.

As alcohol is further consumed, the mind resembles this state: 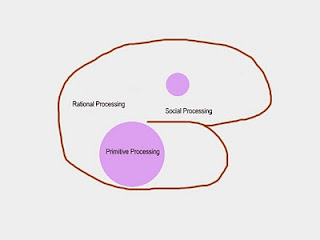 Here, mental processing is diminished overall but primitive processing completely overrides rational thought and social processing has only a small amount to play. After seeing far too many drunks than I care to remember, it's interesting to note that women will still try to preserve some modicum of decency even at very high levels of alcohol consumption. Unless absolutely intoxicated, women will still keep their legs together and make an effort at preserving some semblance of modesty commensurate to the degree of their intoxication. It's interesting to note just how this differs when compared to men. As in women, the higher level functions deteriorate with increasing alcohol cosumption, but given that the "cognitive hard wiring" in men places less weighting on social issues , they are more likely to engage in anti-social behaviour at lower levels of inebriation than women.

Now there are a couple of take home messages here:

Firstly, it's important to the recognise the importance of social factors in female decision making and of its relative resistance to alcoholic effects. This would seem to indicate that the weighting is "hard wired" and innate to female nature. Men and women process information differently.

Secondly, under the influence of alcohol the weighting given to primitive processing increases while the weighting given to rational and social processing decreases. The net affect is that a woman is more likely to make decisions based on her feelings rather than on rational calculation. In terms of mating, the man that can elicit a sexual/mating response whilst the woman is in this state is going to get the goods. But since the mating response is contingent on activation of the alpha receptor(and this to a certain degree is hard wired) it follows that alpha traits will elicit this response. Traits which elicit a feeling comfort ( Nice Guy traits) are not going to elicit a sexual response. This is why the Nice Guy gets to take the drunk girl home with a peck on the cheek(no sexual response elicited), whilst the dominant jock gets to engage in unnatural perversions(High sexual response). It's also why the "nice girl" under the influence, is prepared to engage in depraved acts since her brain is totally being driven by "basic instincts", the inhibitory cognitive pathways have been neutralised by alcohol.

Tirdly, the choice of mate that a woman makes whilst inebriated is not the choice that she would make whilst sober, as in sober states rational and social factors influence mate selection. This is why the sober woman frequently regrets the drunken one night stand.

Alcohol is a "sleaze propellant" because it neutralises our higher cognitive functions, letting our 'baser instincts" take control. As more alcohol is consumed we in fact become more like animals; and like the animals, mating preference is genetically geared towards alpha males.
Posted by The Social Pathologist at 11:08 pm 9 comments: