I Live in Bedford Falls 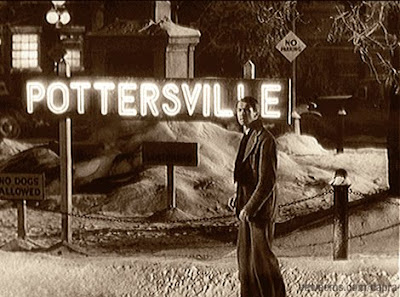 One of my favourite movies is, It's a Wonderful Life. I'm sure many of you have seen it but for those who haven't, its a story about a man who gets to see what the world would of been like had he not been born. George Bailey, played by Jimmy Stewart, is a good man who runs a savings an loan, and basically through small acts of sacrifice, helps build up the community in which he lives(interestingly its a good tale on the merits of responsible banking).The town he lives in is Bedford Falls, a picture of what we would like to think is small town America. Clean, decent and neighbourly. Shakespeare had a great term for the feeling that Capra evoked in his image of Bedford Falls, "domestic awe".

In the movie, George has an evil competitor, Mr Potter, who would surely find a place on the board of Goldman Sachs today. When George gets to see what Bedford falls would be like if he had not been born, it becomes Pottersville, a sleazy, "exciting" town of violence, booze and sex. Where everyone is in it for themselves. George, seeing what the world has become without him realises his life is not worthless and gains a new appreaciation for it.

I never watch the ending of the movie, because I sob like a baby.

Now the person who most inspired me to start blogging was Theodore Dalrymple. I had accidentally stumbled onto him whilst surfing on the Internet and found what he said was the mirror of my professional experience. Whilst he has spent much of his professional career working in the British psychiatric system, I have spent a lot of my profession career working with the lower classes of Australia, and can vouch for their similarities with the British proletariat.

My own childhood resembled pretty much life in Bedford falls. My parents were working class. They were frugal but lived their life with dignity. We always had enough to eat, our houses(and gardens) were spotless and we lived in a community where people looked out for one another. Even my parents, whom I resented on many occasions, never game me the impression that they did not care for me. Even if I wanted to, I could not have been neglected and in my youth, I could remember my parents keeping the door of the house unlocked when they went to the neighbours. I thought everyone lived this way.

I was of course wrong. Although I had inklings that there were working class people that lived differently to ourselves I had not really encountered them in large numbers till I started working in my professional career. Spend any time with the bottom rung of society and the you realise that it assumes the visage of Hobb's world: nasty, brutish and short. Violence is random, sudden and without explanation. Social atomism and personal responsibility are absent. Self-gratification is the sole motive of their existence. Rudeness, outright lying and aggressive self assertion are commonplace , and after a while one becomes desensitised to them. The world of the underclass is not just materially deprived, it's different. It's horrible. The concepts of permanence and restraint are lost and human beings are motivated by their animal urgings. One can never be "at ease" with these people since they are constantly evaluating you for any potential advantage they can gain from you. Relationships are viewed from a point of potential advantage. Its every man for himself. Alliances rather than friendships. Hookups rather than love. Turn your back, they'll steal your stethoscope. Every medical history of tinged with the realisation that they may not be entirely truthful. Every relationship, an act of potential manipulation. They are the citizens of Pottersville.

Working in this environment crushes the spirit. There is a kafka-esque quality to it, to which the social services(and the Law) contribute no end. Any attempt at virtue is systematically crushed, vice encouraged. Acts of kindness, decency and self restraint are the exception and not the norm. You do literally become hard-boiled and cynical. One becomes so used and desensitised to evil, that what shocks are not acts of depravity but acts of goodness. The psychological effect of working in such an environment is "spiritual drainage, and as I have followed Dalrymple's writings for the past few years I have noted in him, like in myself, a weariness, and a revulsion at the spiritually toxic environment that makes up the life of those in the bottom(and the very top). It makes me ever grateful for the life that I have and it's also why I could profoundly sympathise with him in this post. I too know that feeling.

The problem is now that this prole culture is drifting into "respectable" society. When I read sites like Roissy in DC and The Errant Wife, I feel like I'm breathing the air of Pottersville. Prole habits are pushing aside the traditional bourgeoisie virtues and indeed many of the middle class now resemble "gilded proles": middle class incomes with untermensch habits. The bourgeoisie are dying.

Now you would imagine that given a choice between Pottersville and Bedford Falls the choice would be easy. This article in Salon illustrates the depth of our corruption. Still this reply to the article is worth quoting:

When George was in Bedford Falls he called it a “crummy little town” and is one of the down sides of being from Bedford Falls—having the capacity of visualizing a different reality--the counter factual--in which one can live free from desperation, tragedy, and tyranny. You know that you’re really in Pottersville when it starts looking good and the only difference that is meaningful is the quality of the bars.

Still pockets of decency remain, and coming home from work there's been many a time when I've felt like George Bailey, grateful for the friends and family that I have. Grateful for the life that I have and the simple pleasures. Grateful for an oasis of goodness in a sea of self-inflicted evil. I know that life can be so much worse.

I work in Pottersville. I live in Bedford Falls.

A Happy Thanksgiving to My U.S. readers.
Posted by The Social Pathologist at 8:15 pm 9 comments: