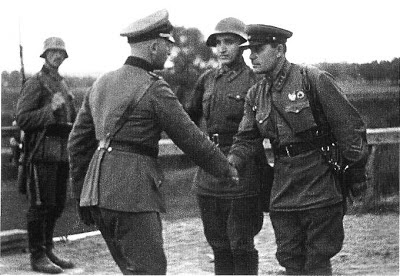 
Fascism is a version of what Germany was under the Kaiser. Even Japan today is fascist.......

One way to describe the Japanese achievement is to say that they have achieved what the Nazis wanted to achieve but didn’t, largely of course because they were mad serial killers obsessed with a lot of things other than economics. Ironically, Asiatic Japan comes closer than any nation on earth to what Hitler wanted. It is a socially conservative, hierarchical, technocratic, orderly, pagan, sexist, nationalist, racially pure, anti-communist, non-capitalist and anti-Semitic society.

Of course, it would be unfair to describe contemporary Japan as Nazi-like in any of the senses that are notorious (though one cannot help observing that she has never been contrite about her WWII actions the way Germany has.) More correctly, the architects of the Japanese system learned from their disastrous experience in WWII that the kind of society they wanted could not be achieved through a totalitarian predator-state and they calculated that it could be achieved through the forms, though not the content, of liberal democracy, which is how Japan presents itself.

I'm not sure if commentator asdf is a trad or not, but his comments illustrate just how much contemporary right wing thinking is done through a left wing controlled frame.

Japan was utterly beaten at the end of the Second World War. It's military class was stripped of its power and a democracy was forced onto the people of Japan. ( Under the watchful eyes of the U.S. military). Japan's domestic and social policies were thus a product endogenous genuine democratic process and thus to describe the Japanese state as fascistic is disingenuous. What asdf means, I suppose, is that the values that the Japanese have chosen, through the mechanism of democracy, are inherently fascistic.

Under this leftist reframe, fascism ceases being about a system of government but a slur on a set of cultural beliefs, belief's which share a strong overlap with conservatism.  Sensible conservative policies are thus stymied because of the guilt by association with Fascism. Because the fascists worshiped masculinity, therefore masculinity is fascist. Because the fascists were nationalist, nationalism is fascism and so on. Once again, it's guilt by association.

Wilhelmine Germany did have many values which overlapped with the ideals of Nazism but,  as system of government, it never set up concentration camps, practiced eugenics and totally stripped away the rights of an individual. Wilhelmine Germany was conservative but it wasn't evil.  To imply then that Nazi Germany was a fulfillment of Wilhelmine ideals is then to imply that the Nazism is the fulfillment of Conservative ideals. i.e Conservatism and Nazism are the same. It's standard low-brow left wing boilerplate.

But is strange how only certain associations are considered fascistic and other not. When Nazi Germany wasn't fighting wars or killing Jews it was busy implementing other social engineering policies on its people. It was one first societies to recognise the dangers of smoking and enforced anti-smoking bans. It subsidised holidays for the working class. It slashed unemployment through deficit spending. It promoted breast cancer screening,  promoted an  effective national policy of physical fitness, promoted animal welfare and  pushed environmental clean up laws;  all the standard feel good policies of the Left. Yet, even though Hitler enthusiastically implemented them, these social policies are not considered fascistic. Why so?

The answer to this puzzle is best explained by scholars such as David Ramsay Steele* ( a former socialist) and  James A Gregor.  Quite plausibly, they argue that the mainstream orthodox understanding of the phenomenon has been heavily influenced by the preponderance of left wing writers on the subject.  These left winger thinkers downplayed the Socialist origins of fascism and instead  exaggerated the differences between the two strains of revolutionary thought, in the same way that an Ulsterman would emphatically deny that he has anything in common with an Irish Catholic. The Hindu looks on, amused.

Thus, left wing thinkers, wishing to distinguish themselves from their "right wing" co-socialists saw the origins of fascism in the things such as racial theory, militarism and nationalism downplaying the underlying metaphysics of socialism, which justified merciless total war against any opponent of the socialist vision. The reason why Whilhelmite Germany did not set up the gas chambers, even though possessing all the cultural prerequisites for the Final Solution, is because Whilhelmite Germany was Christian; Nazi Germany, Socialist. What unites Auschwitz with Katyn is the metaphysics of Socialism.

And it is within this left "frame" that Modern Japan gets called a "fascistic" country. National policies, which a century ago would of been considered mainstream and sensible, are now prime examples of latent fascism. Japan's economic and social policies are nothing new, they were pretty stock standard throughout the Western World before WW2.  Most nations wanted to maintain their own internal cultural homogeneity, pursue their own economic interests, maintain their religions, and were quite supportive of science and technology. The fact that what was once considered basic common sense conservative social policy is now considered fascistic shows just how leftward the culture has lurched. Today's right is in someways yesterday's less radical left.

The failure of the Right to combat this understanding of fascism has worked towards the Left's favour. Society, wishing to avoid a recurrence of the Nazi experience  and yet understanding that experience through the prism of left wing influenced thought, suppresses the window dressing of Fascism whilst keeping its poison intact. The West wages war against "militarism" (i.e sensible national defence), Xenophobia (i.e an aversion to multiculturalism), Sexism (i.e sexual polarity), Nationalism (i.e national self interest) with an aim to prevent the resurgence of fascism. Thus the social policies which are currently corroding the West are enabled and any attempt to stymie them becomes a battle against the extreme right. i.e the Fascists. The Left's success in conflating fascism with conservatism means that any type of straight out disagreement with the Left is immediately labelled as fascistic. Thus the Right must respond to the Left in degrees, not outright opposition.

The problem then for contemporary conservatism is how to appear virile without being accused of being fascistic  And this problem is best exemplified by the case of Ernst Junger.

The writer of Storm of Steel(autobiography) was widely praised by the Nazi's. Junger, who saw war as a formative experience and a test of manhood did not tow the All Quiet on the Western Front (work of fiction. G.K Chesterton hated the book) line. He saw the positive aspect of war and battle for the man who was able to withstand it horrors intact.  He was fiercely Nationalistic and hostile to liberalism. The Nazi's lapped up his writings which synched so well with their ideology. So great was his prestige amongst the goose steppers that even when he criticised the regime and was peripherally involved the assassination attempt of Hitler he was left relatively untouched. Yet from the Wiki article.


In the 1920s Jünger published articles in several right-wing nationalist journals, and further novels. As in Storm of Steel, in the book Feuer und Blut (1925, Fire and Blood), Jünger glorified war as an internal event. According to Jünger, war elevates the soldier's life, isolated from normal humanity, into a mystical experience. The extremities of modern military techniques tested the capacity of the human senses. He criticized the fragile and unstable democracy of the Weimar Republic, stating that he "hated democracy like the plague."] Although never a member of the National Socialist movement around Adolf Hitler, Jünger never publicly criticized the regime before the war. Jünger, however, refused a chair offered to him in the Reichstag following the Nazi Party's ascension to power in 1933, and he refused the invitation to head the German Academy of Literature (Die deutsche Akademie der Dichtung). Even though he never endorsed the Nazi Party, and indeed kept them at a careful distance, Jünger's Storm of Steel sold well into the six-figure range by the end of the 1930s. In the essay On Pain,[8] written and published in 1934, Jünger rejects the liberal values of liberty, security, ease, and comfort, and seeks instead the measure of man in the capacity to withstand pain and sacrifice.

The Nazi's loved him because they worshiped the masculism of Junger yet he thought them vile rabble. So was he a Nazi?

Well, for many people he was, so intertwined was his philosophy of war with Nazi ideals yet he emphatically denied being so. Junger was a Wilhelmine conservative, but so much has the cultural ground shifted to the Left that even Wilhelmine Conservatives are now thought of as Nazi's. As for himself, Junger thought himself old school. Asked what he thought of the new post war Germany Junger said:


My wife and I are loyal citizens of the Federal Republic, but not particularly enthusiastic ones—our reality is the German Empire

I suppose the point that I'm trying to make is that the Left has been able to conflate a vigorous masculine conservatism with Nazism.  Any resurgence of a virile conservatism has to tackle this problem.

*The essay by David Ramsay Steele is a must read.

Posted by The Social Pathologist at 12:29 am 19 comments: