Some Data on Infidelity.

Understanding Infidelity: Correlates in a National Random Sample by Aktins et al, is a paper with several interesting bits of data. Using data from the 1991-1996 General Social Survey, the authors attempted to identify factors which were correlated with infidelity.

The authors tried to control for multiple variables including religiosity, previous divorce, income etc. However one of the really strong risk factors for infidelity was age of first marriage. 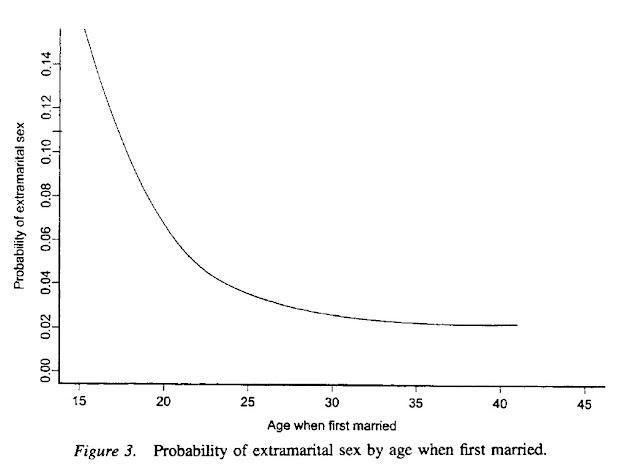 This is an interesting graph, open to a lot of different interpretations. My personal view is that it is a graphic illustration of the the "grass is often greener syndrome" with those who got married wanted to dabble in what they missed out on.  Anecdotally, I have a few female patients who married in their late teens and early twenty's who have have never strayed, but have expressed some regret at not having "had some fun" before they got married. Still, the culture they were surrounded in was actually hostile towards divorce and infidelity so I imagine it is this which may have helped keep them in check. I think that a combination of today's strong cultural emphasis on sexual hedonism in conjunction with an early marriage would provide a strong temptation to stray. I imagine that the high risk of infidelity amongst the married young is probably motivated by this factor to a high degree.

The second graph which I found interesting was this one. 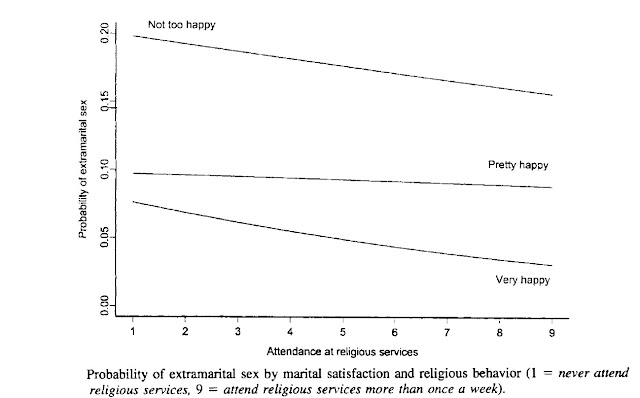 What we see in this graph is just how powerful hedonic satisfaction is in keeping partners on the straight and narrow. Now I'm a big proponent of religion, but it's dispiriting to see just how much "hedonic" considerations seem to override religious commitment.

I think this graph says a lot about the reason for marital instability and its decline as an institution; marriage has become another vehicle for "personal happiness" instead of a fundamental societal unit. Our forefathers were quite perceptive and recognised that, even in their time, there were many unhappy marriages. Yet they made it very difficult for the couple to part because of both religious imperative and societal considerations. They were big believers in doing one's duty regardless of the cost, our age has far less commitment to sticking it out for the bigger picture; everyone is in it for themselves.

Marriage is no longer seen as a commitment to one another, or even the children, rather, it's a vehicle justified in how much happiness it gives to the participants. It's over once the fun stops.
Posted by The Social Pathologist at 11:27 pm 8 comments: