A tale of two massacres.


I was going to put down some thoughts on the Newtown school massacre but felt that the subject had been covered to death by the other bloggers and my contribution wouldn't add much to the subject. Still, it did pique my interest in the subject of school shootings and Wiki has a good entry on rampage killers.  Unfortunately, these events are not that uncommon and there appears to be a long history of them. Still, two cases caught my eye which seem to well illustrate the crisis of masculinity in our current culture.

The fist case is that of the Virginia Tech Massacre.  Roissy's comments at the time were, I felt, particularly pertinent.


The killer of 32 people at Virginia Tech used a .22 caliber and a 9mm pistol.
Why wasn’t this guy rushed by anyone?  He’s calmly picking people off.  Bloodshed all around.  Imagine you’re there, trapped in that classroom.  You know you’re as good as dead if you just sit immobile like a juicy target, so you may as well lunge for him and drive your thumbs in his eyes.  You might still die, but you’ve improved your odds dramatically, especially if you go at him during a reload.  He’ll maybe get off one or two shots at you but handguns are notoriously inaccurate, especially when a person is running into your face disturbing your zen-like aiming.  You’d stand a good chance of him missing or you incurring a non-fatal flesh wound.

So a rude thought intrudes.  Engineering campus.  Nerds.  A taxonomy of guys who’ve probably run from fights their whole lives.  Total inexperience with summoning the warrior animal spirits.
There are times of crisis when brainy deliberation or pavlovian avoidance response will do a man no good.

Maybe the bullets were flying so fast, the killer so accurate (from marathon sessions of video gaming I bet), the timeframe so compressed, that in the chaos no one had an opportunity to do anything.  Well, except for this guy.

But if that’s not the case, then I’ll be uncharitable and ask…
did nerdiness cost lives?


yeah, i’ve changed my thinking on this. i think passivity is a systemic problem with men in the West, [ED]not just relegated to nerds. i’m pissed that one guy was able to calmly kill 30 people without anyone at least trying to subdue him, so that colored my reaction.

i talked to a guy recently who went through nyc police training and he told me that a certain percentage of people will go into shock and do nothing in the event of a crisis. the nypd trains their recruits by having them walk around corners and get “shot” unexpectedly with harmless plastic caps. the first few times it happens the recruits stand motionless in shock.

after a few rounds of this training the recruits are able to think better on their feet and react quickly.

Compare this with another school shooting, this time in Bremen, in 1913. From the Wiki Entry;


At approximately 11:00 a.m. Heinz Schmidt entered St. Mary's Catholic School, armed with six to ten revolvers or Browning pistols (depending on sources) and about 1000 rounds of ammunition, which he had bought several weeks prior to the shooting. Because of the large number of rounds, the owner of the gun-shop, where Schmidt had bought his arsenal, deemed it necessary to contact police, though the incident was not found to be important and thus not investigated any further.

In the hallway on the first floor Schmidt encountered Marie Pohl, a teacher at the school, who was just stepping out of classroom 8b, and, seeing his agitated appearance, questioned him about his business at school. Without answer, Schmidt proceeded to shoot at her, barely missing her head. While Miss Pohl fled into a classroom nearby Schmidt entered room 8b, which was occupied by 65 girls, most of them being 6 or 7 years old, and immediately began firing at them. Also shooting at the children after they hid under their tables the gunman instantly killed two of them and wounded another 15. When the girls fled out of the classroom, Schmidt followed them, still shooting. While trying to escape, one of the girls fell down the stairs, broke her neck and died.

The gunman then went back and unsuccessfully tried to enter another classroom that had been locked by a teacher who had realized what had been happening. Schmidt shot at the school janitor, Butz, who attempted to apprehend him, hitting him in the face, before going upstairs where he was tackled by teacher Hubert Möllmann. When Schmidt managed to break free from Möllmann's grip he shot the teacher twice, hitting him in the stomach and shoulder, whereupon he proceeded to shoot out of a window at the children on the schoolyard, injuring five boys. The shots also wounded a roofer working nearby, who, together with his colleagues and other people alarmed by the shooting, then rushed into the school building, though as they arrived on the first floor the gunman had already been subdued by janitor Butz and a teacher named Hartlage. When Schmidt was led away by police he was met by an angry crowd outside, which beat him up and attempted to lynch him, until the police officers managed to hold the mob at bay with their sabres.

In total, Schmidt had fired 35 rounds, three girls died instantly, while two more later succumbed to their wounds – the last victim dying some time in mid-July – and 18 children, as well as three other persons were injured


At Virginia Tech in 2007, the only people who seemed to offer any resistance to the shooter were an old Guy and middle aged female teacher. Where where the young men? (Apparently a student named Henry Lee was assisting the female teacher barricade the room but no one was rushing the shooter.)

On the other hand, back in 1913, the janitor, the teachers, even the roofer working next door and his mates--who had ample time and opportunity to run away--all rushed the bastard. Butz, the janitor, even went back for seconds after being shot in the face!!  Balls of steel I tell you. 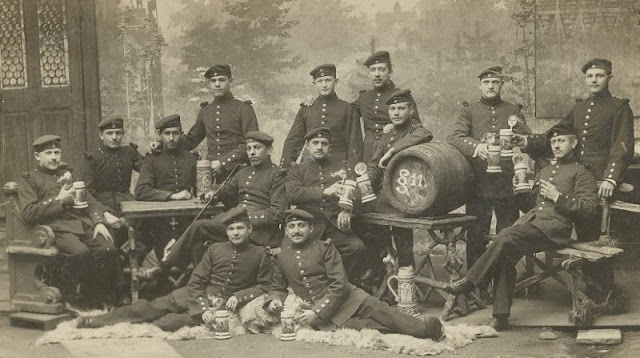 (Picture of German Reservists from 1911. Pretty much the same type of guys who would have tackled the shooter.)

Somewhere between then and now, the manhood died.

The older I get, the more convinced I am that the First World War was the dividing line between the old and modern world.

Posted by The Social Pathologist at 10:15 am 41 comments: