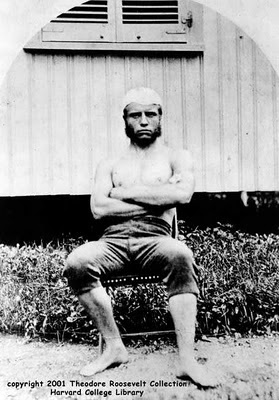 One of the blogs I like most to frequent is Ferdinand's. His In Mala Fide blog is perhaps the best pop conservative sites out there. The term Pop Conservative is not meant as a slight, it's likely to be far more influential that a highbrow blog since it adopts a style that the average man can appreciate. I like his site not because he mentions my blog, but rather he promotes other blogs which are far more interesting than mine. One that has caught my eye and has impressed me no end is Athol Kay's, Married Man Sex Life. Really, although the blog title might be a bit off putting--he really should call it Wife Management 101--the blog is definitely worth the read. Why? Because Athol "gets" the big picture.

The Roissysphere tends to view relationships as purely sexual. A man status and happiness are measured by the quality of the lay. A man banging 10's is more Alpha and happier than a man banging 8's. While there is a great deal of truth to this in high school, in reality adult relationships need much more than simple sexual attraction. That's not to say that sexual attraction is not important--social conservatives please note--rather grown ups tend to want other things as well: stability, friendship, love etc. Neil Strauss, the populiser of Game realised this; his own relationship with Lisa Leveridge failed. He could pull in the hotties but it appears he couldn't keep them.

The curious paradox is that what seems to keep relationships going long term is a combination of both alpha and beta traits. A man has to possess characteristics which both turn a woman sexually on and turn her off. In Roissy's taxonomy of men, the males are divided into Alpha, Beta and Omega. But Roissy only measures by the ability to get laid. Instead Athol Kay--who is focusing on long term relationships-- builds on this and proposes the Gamma male:
(I've shamelessly borrowed this image and text from his site. It's brilliant) 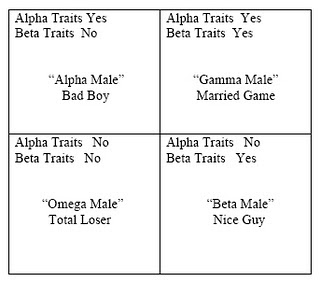 The Omega Male is easiest to dispense with. He’s just devoid of positive qualities and only the most desperate of women would desire to mate with him. Even then he’ll likely need up being supported by her to some degree. Avoid him.

The pure Alpha Bad Boys certainly do pull the women, but the relationships tend to be short as eventually the women become uncomfortable with the lack of comfort building support. There’s plenty of excitement, and sizzling sex as the attraction is definitely there for her, but she knows from the beginning its not going to last, but she is drawn to him anyway.

The pure Beta Nice Guy also pull women, but they pull differently. They “make sense” on an intellectual level and they are very comfortable to live with. More than likely they are too comfortable, and the woman tends to want to see a display of dominance of some sort before she becomes fully attracted to him. Ultimately the nice guys are just too sexually boring to women to remain completely focused on one. Queue the “I love you, but I’m not in love with you speech”. What is often seen in young women is ping ponging between bad boys and nice guys – she gets a dose of crazy sexual attraction from the bad boy, but then she needs the comfort building and she seeks it from a nice guy, and then the cycle repeats over and over until the music stops around age 35 and she’s scrambling to find a chair anywhere.

The ideal is the Gamma Male. Not often talked about, but they are out there. Usually a Gamma is an Alpha Male that “grew up” and toned down the antics slightly and started being socially conscious and more of a team player. Or they started as a Beta Male that “grew a pair” and started bumping back on the rest of the world rather than just taking it lying down. Either way works as a route. Like Jean-Luc Picard, Gammas use diplomacy but when required to they will respond with adept force. Mostly they are consciously aware of both their own natures, and the needs of women. They adjust on the fly to the situation, sometimes hard, sometimes soft. Gamma’s are the true ideal, but I think the Alpha and Beta terms are so ingrained, that it is simply easier to broken record the idea that if you’re too Alpha the solution is to add Beta, and if you’re too Beta the solution is to add Alpha. You already know what your weak area is. Work on that for easy gains.

A couple of points. Firstly, these are pretty astute social observations and they square up with what I see in practice. Implicit in Mr Kay's observations are that women are sexual beings and that there is a sexual dimension to normal male female relationships. Secondly, for a male, being "nice" alone just doesn't cut the mustard as a woman needs a sexual dimension to the relationship for it to go anywhere; women are inherently sexual beings. Religious conservatives please note, sexual desire isn't something that "foreign" to the female ideal, it's part and parcel of the female package. The romantic meme, that the way to woman's virtue is via the path of "niceness", flaunts real world observation and is not congruent with reality. Finally, when women are asked what type of guy they like, a nice guy is usually the answer. What they of course mean is a nice guy who makes them hot and horny.

The Roissysphere has popularised the notion of the Alpha male. And really, if a life of Hedonism is your goal then that's all you need. Because it's quite apparent that women--when freed from social mores--are just as superficial judges of character as most men are. In our current bathhouse culture, women are more likely to be motivated by their loins than their heart in the choice of a bed mate, especially when drunk. So if your aim is to bed as men women as you can, being Alpha is all that matters. The Beta traits, the traits that are the foundation of lasting love, domestic awe, industry, prosperity are unnecessary. But if these things matter to you, then your going to have to cultivate both alpha and beta traits you're going to have to strive to be a gamma male.

(N.B. I don't agree with everything he says, I disagree with his pharmacological opinions i.e how the pill works and the use of anti-depressant medication, but his understanding of psychology in my opinion is spot on.)
Posted by The Social Pathologist at 7:56 pm 14 comments: