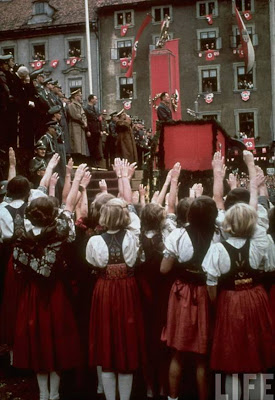 In my previous post, commentator James felt that my view of Fascism, as a man's socialism, was not quite correct.


I don't buy it— Nazi voters seem to have split almost equally between men and women, but communist voters in Germany skewed heavily male. Going just by voting patters, communism was the more masculine ideology. Maybe the Nazis voters were alphas and the commies were betas, but that would be impossible to prove and it seems like other factors (urban vs. rural, employed vs. unemployed, etc.) were more important.

James then proceeded to provide a fascinating link into the demographic characteristics of those who voted for Nazism.

There can be no doubt that the NSDAP recruited across a broad social spectrum. However, its support was not random. We have already noted the over-representation of Protestants, rural areas and small provincial towns, as well as of the Mittelstand, in Nazi support and there was a similar structure to the movement's working-class constituency. The working class, however, was under-represented in the Nazi ranks when compared to the German population as a whole.

The working-class presence among those who voted for Hitler can be made to correlate positively with the proportion of working classes in the electorate as a whole only when foremen, daily helps, workers in domestic industry and, significantly, agricultural labourers are included in the definition of working class. When rural labourers (who inhabited a world quite different to that of the city dweller and factory employee, often paid in kind or subject to landlord pressure) are removed from the equation, a slight negative correlation arises between Nazi support and working-class presence. And if workers in craft (as distinct from factory) sectors are also removed from the equation, the correlation becomes even more negative. It is negative, too, in the large cities where, the closer we look at the factory working class, the lower the percentage support for the NSDAP becomes.

Nazism and Socialism appealed to different professions and different types of people. City office drones and industrial workers did not vote for Hitler, rather it was the small businessman, the rural worker and professional classes which voted for Hitler. The characteristics of such people are that they are relatively autonomous and socially conservative. On the other hand, the the more a man was an office drone or factory fodder the more likely he was to vote for the socialists/communists. Being a worker did not matter as much as the type.


It is clear that some groups of workers were much more prone to support the NSDAP than others. This applies above all to rural labourers, to workers in rural areas and small provincial towns, and to craft workers in small units of production. Also to former agricultural workers; workers for whom industrial employment was only an ancillary activity; commuters who lived in the countryside but worked in town; workers in domestic industry, (often non-unionised, without socialist traditions and often female)

Furthermore, only 13 per cent of the unemployed -- who comprised some 30 per cent of the manual working class in the middle of 1932 and who were overwhelmingly concentrated in the big cities and in large-scale manufacture -- supported the National Socialists. It therefore is clear that, although large numbers of workers did vote Nazi, these were not in the main from the classic socialist or communist milieux, rooted as these were in the large cities and in employees in the secondary sector of the economy. If the number of workers in this sector plus the unemployed is correlated with electoral support for the NSDAP, the result is clearly even more negative.

But it is the contention of my post that the Nazi party was a party which would appeal to alpha males who had embraced socialism. This does not mean all alpha males were Nazi's, rather, alpha males who thought socialism was a good idea would embrace Nazism.  Alpha in this instance is alpha in the traditional Roissyian sense;  i.e the ability to attract women.  Therefore a party which expressed "alpha" the most would be the party which gave the the frauleins the greatest amount of tingles and consequently their vote.

Now remember, in 1930's Germany,  if a woman decided to vote socialist, she had three main choices: National Socialism, Communism or Democratic Socialist.


Until 1930 women remained unlikely to vote for the Nazi Party. Moreover, in the presidential election of 1932 a clear majority of women preferred Hindenburg to Hitler. However, the early 1930s did see a narrowing of the gap between male and female voting patterns, especially in Protestant areas. Indeed, in some of these by July 1932 the NSDAP was winning a higher percentage of the female to male vote. In that month some 6.5 million women voted Nazi, many of them probably with few or no previous political ties. Where they came from the working class, they were likely to be non-unionised textile operatives or domestic workers.

A further difference resides in the gender of support. The NSDAP, at least in the Depression of the early 1930s, was much more attractive to female voters than the German Left in general, and the KPD in particular. For most of the Weimar Republic women voted less frequently than men, especially in rural areas. When they did vote, wives often followed their husbands; and daughters and sisters, the head of the household; or so many have claimed. It is also not unreasonable to believe that the female vote divided along the same lines of class, confession and region as that of men. Yet there existed significant differences between male and female voting patterns

If we had to rank the appeal of socialists to the German female on the basis of socialist voting patterns it would be Nazi first (Alpha), Social Democrat Second(Beta), Commie third(Omega). 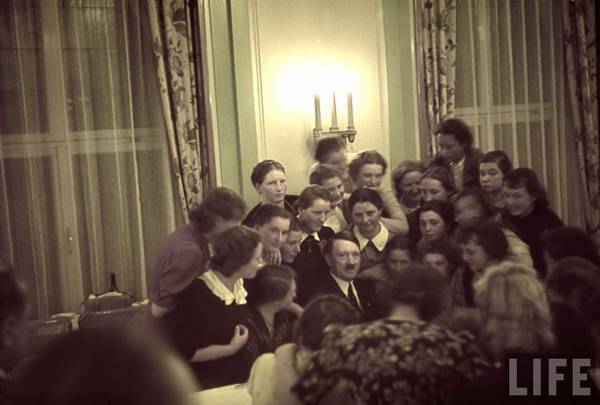 Do I detect a smirk?

Nazism gets labelled a right wing ideology because it is a variant of socialism that has strongly embraced Paternalism, authority and sexual polarity. It's right wingedness is only relative to the sexual ambiguity and kumbaya social philosphy of the rest of the Left, otherwise it is the same. Great leader, society controlling the means of production, everything for the people, crush the opponents of the people, utopianism etc.  It's the "bad boy" child of the Left.

Finally, the alpha" bad-boyness "of Nazism still to this day serves as a source of sexual stimulation. Nazi fetishism is alarmingly common on the internet. But communist or socialist fetishism is rare or non existant. The reason why, is that the latter two ideologist are pregnant with sexual amorphism and their ideology or kumbaya sexuality is incompatible with the nature of sexual desire.

* Once again, for the retarded, this is not a crypto endorsement of Nazism or Fascism. The ideology deserves to burn in Hell in my opinion.

**The images are from Life Magazine and used without permission. Use is solely for the purpose of public debate and therefore of fair and legal use.
Posted by The Social Pathologist at 11:27 pm 33 comments: