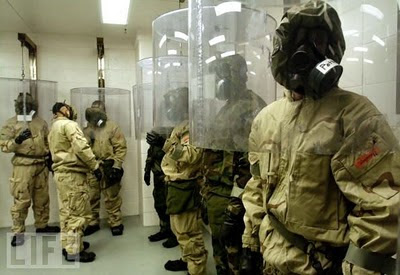 The Ebola virus was first recognised in 1976 and is one of the most deadly viruses on earth. It has a mortality of close to 80% (depending on the figures) and cuts a spectacular path of destruction. Spread is through the exchange of bodily fluids(including semen). The illness initially resembles a a typical cold but rapidly progresses to altered consciousness, bloody vomiting and diarrhea, bleeding, and a quick and gruesome death.

First recognised in 1981, the HIV virus is also spread by bodily fluids.  Infection initially causes a cold like illness and then the virus apparently seems to do nothing for a long period of time. The host, bearing no stigmata of the disease or any ill effects, carries on with the same behaviours that initially caused infection. Slowly the individual realises that something is wrong as opportunistic infections take hold. Without treatment, the mean time to death is ten years. Untreated, mortality is close to 100%.

The mode of death between the two illness is worth noting. In Ebola, the stigmata of the disease become readily apparent and the patients death is spectacular. In HIV, death's ensnarement is more leisured. For a long while the individual appears unaffected, even healthy initially, dying only years after infection.

The HIV virus is estimated to have killed approximately twenty five million people. Ebola, on the other hand, has killed roughly 1,800.

Two viruses, roughly discovered at the same time and with approximately the same mortality, yet the the death toll of one is four orders of magnitude greater than the other. Why?

Ebola's spectacular viciousness in claiming its victim alerts those unaffected of the danger in their midst. The malignity of Ebola is obvious and individuals can easily recognise the danger approaching and take appropriate steps to stop it. The afflicted are obviously unwell and the unaffiliated flee from them. Ebola consumes it's host before it is able to spread. It path of destruction thwarted by its obvious efficiency in killing.

HIV, on the other hand, is a more congenial fellow. After a mild illness, it leaves its host alone for years, minding its own business and slowly spreading. Bearing no stigmata of illness, the afflicted does not affront anyone and normal precautions are not implemented by others, allowing the virus to silently spread. The threat of HIV is not obvious, yet it kills to a greater degree than Ebola. It's evil is subtle as opposed to Ebola's gaudy display.

HIV is a less apparently obvious killer than Ebola, and its this subtlety which makes it far more dangerous. It's subtlety allows complacency.

Ideas can resemble viruses as well. Some, such as fascism, are seen as malignant early on and thwarted.  Others, such as communism, are just as malignant but for many years not recognised as such by huge swathes of the community. Over a hundred million dead trying to implement the Communist idea, that superficially, was meant to make the better place.

What got me thinking about this topic was this comments thread over at Jim Kalb's. Commentator Thursday wrote.


Yes, they do. Slumlord/The Social Pathologist, he who has posited absolute truth as the sole basis for conservatism, and the one who pointed out the Feser article to me, has made the argument that everybody is always the worse for having sex outside marriage. Plus, being raised in church and going to church schools, we were always being told about how the minute you had premarital sex, your life would just fall apart and you would be permanently damaged by it.

Perhaps the most dangerous ideas are the ones, which in the short term, seem harmless or are beneficial but which are toxic in the long run. The aim of diabolical genius is to allow tactical victories whilst aiming for strategic defeat.  The bovine populace, fixated as it is on the "here and now", never sees anything in particular going wrong in any single or particular act, yet not being able to see the big picture, wonder why society is crumbling around them.

Take radical liberalism for instance. It seems to have wilted both the identity of the West and its ability to respond to external threats. This comment by Steve Sailer deserves quite a bit of reflection.

In WWII and the Cold War, we faced enemies the caliber of Wernher von Braun and Andrei Sakharov. In the War on Terror, however, a strikingly large fraction of Muslim would-be terrorists, such as the recent Underpants Bomber and the Times Square Fizzler, are screwups.

Criminal masterminds turn out to be more common in movies than in real life. Even Osama bin Laden got lucky. A video shows him admitting gleefully that he hadn’t expected the World Trade Center towers to come down. And without George W. Bush’s campaign against airport profiling of Arabs, Mohammed Atta likely wouldn’t have even made it onboard.

Conservatives of all stripes bemoan the rise of Islam, but they look at the problem the wrongly. Sailer has got it right. Objectively, the Islamic world would be utterly crushed by a determined West. Islam is only relatively strong because the West's current cultural ideology renders it weak. Islam is opportunistically expanding in the West.


Secular democratic liberalism may yet  prove to be Western Society's cultural HIV.

(Image from Life magazine)
Posted by The Social Pathologist at 11:45 pm 17 comments: