I was browsing /pol this evening when I came up post which linked to the video below.

I reckon it's one of the best depictions of what life was like in "affluent" Berlin during the Weimar years.  The Berlin celebrated in movies such as Cabaret. It's very good.

Berlin was a cesspit of degeneracy and vice power primarily by the demand of rich and middle class patrons who had their services supplied by the poor, who chose this option due to their desperate poverty.  Anyone wanting to get a measure of the moral squalor of Germany during those years should look at the magazine Simplicissimus which would make comment of the social problems of Germany at that time through the medium of art. Long term sufferers of this blog will know that I am a huge fan of the work of Otto Dix and George Grosz, men whom I wouldn't of shared political affinity with but men who were nonetheless disgusted at the moral abyss which Germany had fallen into after the First World War.  Their work is profoundly disturbing, disgusting and degenerate until you realise that that was what they were trying deliberately get across in their work. Berlin, especially was a morally destitute city. 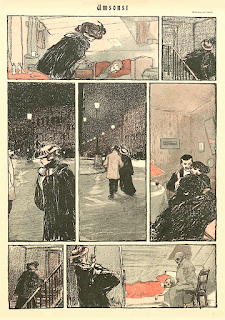 It's easy to see how the moral revulsion generated by the antics of Berlin would engender a lot of sympathy for a man like Hitler.  Purging the filth, regardless of the details, becomes very appealing.

However, I think the important point to remember here is that the solution to Left wing degeneracy is not Right Wing Degeneracy.  The Left may be all for permissiveness and degeneracy but the evil Right can push very hard in the opposite direction, and regard life too cheaply and push moral purity with the venom of a zealot.  I think that if a man wants to do God's work, he's got to do it within the framework of God's laws.

Berlin got bombed by the Allies pretty badly during the Second World War. Hamburg--another cesspit of vice vying for pre-eminence with Berlin--was firestormed, in an operation rather eerily called Operation Gomorrah. Thinking about the comments of Jordan Peterson on the subject of Hurricane Katrina, I couldn't but help to think that Bomber Command was the hand of God.

Just saying.
Posted by The Social Pathologist at 12:43 am 13 comments: