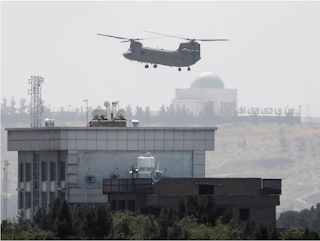 As the debacle of Afghanistan flashes across our TV screens it's important to reflect why a bunch of goat herders were able to successfully defeat the most technologically advanced and copiously equipped military on earth. This all segues well with my current posts on de Gaulle so it's worth a few comments.

If victory is defined as the ability to impose your will on the battlefield, then the fall of Afghanistan--and its rapidity--is a catastrophic defeat for the U.S.  Sure, the US is still capable of affecting much destruction but a desert is not a client state and what's been fascinating to see is that when faced with a choice of a U.S. style democracy and medieval sharia state the local people chose a sharia state. It's not like the U.S. didn't try. Under effective U.S. rule the GDP of Afghanistan grew 500%, women's rights were improved and vast amount of infrastructure was built. America was putting down the infrastructure to integrate Afghanistan into the globohomo system.

And remember, the U.S. has been in Afghanistan for 20 years.

The speed and rapidity of the Taliban advance--most of the time with hardly any fighting at all--showed that American values had completely failed to "take" in Afghan society. The modern American way of life was an unwanted product. As it was in Vietnam.

No while I reckon he's still a bit of a Buddhist Christian, Rod Dreher appears to be getting red pilled quite rapidly and his post on the subject was quite insightful.  As he points out, America's political a military eggheads discounted the role of religion:

This is on the elites. This is on elites like Carter Malkasian, senior adviser to the head of the Joint Chiefs of Staff from 2015-2019. In this piece from last month in Politico, he admits that it never really occurred to these American geniuses that the Taliban were really motivated by their religion. Excerpt:

The Taliban had an advantage in inspiring Afghans to fight. Their call to fight foreign occupiers, steeped in references to Islamic teachings, resonated with Afghan identity. For Afghans, jihad — more accurately understood as “resistance” or “struggle” than the caricatured meaning it has acquired in the United States — has historically been a means of defense against oppression by outsiders, part of their endurance against invader after invader. Even though Islam preaches unity, justice and peace, the Taliban were able to tie themselves to religion and to Afghan identity in a way that a government allied with non-Muslim foreign occupiers could not match.

The very presence of Americans in Afghanistan trod on a sense of Afghan identity that incorporated national pride, a long history of fighting outsiders and a religious commitment to defend the homeland. It prodded men and women to defend their honor, their religion and their home. It dared young men to fight. It sapped the will of Afghan soldiers and police. The Taliban’s ability to link their cause to the very meaning of being Afghan was a crucial factor in America’s defeat.

This explanation has been underappreciated by American leaders and experts, myself included. We believed things were possible in Afghanistan — defeat of the Taliban or enabling the Afghan government to stand on its own — that probably were not.

Gosh, you think? What the hell did these eggheads think that the Taliban were?! It’s like a senior American expert in 1945 writing that it was surprising to discover that the Nazis really cared a lot about race. This is what happens when you have an elite that is wholly secular, and incapable of thinking outside that narrow box. Why did they tap Ghani as president? Because he was the most secularized, technocratic Afghan politician — somebody American experts could understand, but also someone incapable of inspiring loyalty among Afghanis.

The bottom line is that institutional America, homo secularis, was taking on the Taliban, homo religiosus and the Taliban won. The point here is that most men are motivated by more than dollars and cents and that sometimes the intangibles are far more important. But what's also important to note here is that Islam reinforced identity.  America was caught in a a rather interesting bind. To be tolerant, it had to allow Islam to flourish but Islam was opposed to America.  There was a fundamental incompatibility that doomed the US project from the outset.

Christianity, once, also reinforced identity. De Gaulle's opposition to the U.S. and E.U. hedgemony was rooted in his Christian sense of the identity of France. It wasn't xenophobia as much as his Christianity that pushed him hard in rejecting anything the compromised his sense of French identity. De Gaulle and the Taliban may come from different religious faiths, but both understand the teaching, "what does it profit a man to gain the world but lose his soul?

The secular man has no such understanding.

*The mosque in the background of the image is a nice touch.

Posted by The Social Pathologist at 10:40 pm 5 comments: