Some of the best papers dealing with the subject of sexuality and divorce risk are unfortunately not online. I've purchased a few of these and unfortunately they come with pretty stringent copyright restrictions which means I cannot directly reproduce portions of the document. However I am allowed to comment on them.

The data was extracted from the 1988 National Survey of Family group and involved over 2700 white women.

Virginity was defined as having sex within one month of date of marriage. (including before) 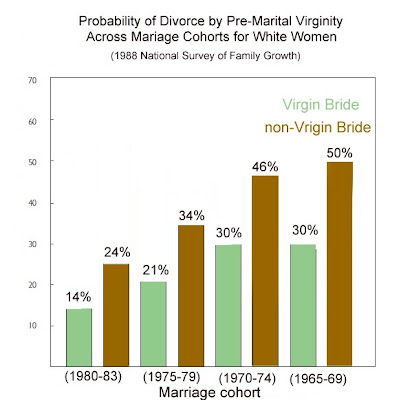 At the end of the "Swinging Sixties" some 43% of white brides were virgins. I found this figure quite interesting since the impression that one gets from the media is that everyone was doing it, they weren't

In the first part of the paper they undertook a fairly conventional statistical analysis of virginity and its relation of divorce.

They did a probit analysis based on three models:

The above analysis was calculated for 5 year and 10 year divorce risk respectively:

The other statistically significant findings were that:

The other really surprising finding was that there is no difference in the rate of divorce between Catholics, Protestants and non-religious when controlled for virginity.

The weakest part of the paper came next when they tried to explain the virginity effect by controlling for "unknown" factors using a bivariate probit analysis. Once controlling for these "known unknown" factors, no difference in divorce rates were observed between virgins and non-virgins. Kahn and London then go on to speculate as to what these known unknowns were. They freely admit that they're guessing. They suggested that it could reside in the attitudes and values of virgins compared to non-virgins. Though they admit it would require a study matching attitudes to divorce rates and virginity which they felt would be unfeasible. Essentially, their conclusion is that there is a qualitative difference between virgins and non-virgins which explains their lesser risk of divorce. They did not think that virginity per se was a protective mechanism with regard to divorce risk, rather that some unknown factors associated with virginity are responsible.

2) Personally I find Kahn and London's explanation lacking. Their own research in a way repudiates their speculations. A persons religion or lack thereof is probably one of the biggest shapers of their life attitudes. Their own research showed the virginity effect persisted across all believing groups. Teachman was also able to show that cohabitors, who do have different attitudes to non-cohabitors, have no different rate of divorce when controlled for a single partner. Kahn and London showed that religion didn't matter if you were a virgin, whilst Teachman showed that "attitude effect" did not matter if you had premarital sex, only partner count. This explanation is overplayed.

3) Once again, that great shibboleth of the evo-bio crowd, education (which is a proxy for intelligence) had a mild effect on divorce rate, repudiating the haters of the critics of the Heritage Study.

Spend your fifteen bucks and buy a copy of the study.
Posted by The Social Pathologist at 12:01 pm 90 comments: