The paradox of extravagance.

John Maynard Keynes was profoundly influential in the field of economics, which is a bit of a shame because some of what he said needed to be thought out more. But while his unthinking acolytes continue to practice his solutions to the current economic crisis, it is worthwhile exploring one of his ideas further.

The paradox of thrift was one of those ideas of Keynes which explain the current government policy of "stimulus". It is assumed that in a normal household there is a balance between savings and spending. And tets take a hypothetical fellow who has a thousand dollars a week to spend, and let's suppose in normal times this fellow saves two hundred dollars and spends eight hundred dollars on stuff and services. That eight hundred dollars of expenditure, keeps business of all kinds profitable and in operation. On the other hand, the money that he has saved is put in a bank which then lends it out to other businesses which need it. There is both consumer demand and capital availability.

Should savings become scarce, in a natural market, the demand for savings would push up the rates of interest which would encourage more saving and decrease consumption. In a normal situation this would happen continuously so that the market would quietly hum along. Now Keynes's paradox always assumed that there would be savings to trade for consumption. 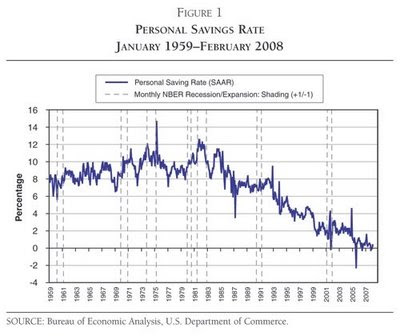 Keynes assumed wrongly. From the above chart, the U.S is spent. There are no more savings to trade for consumption. It also means that the U.S has no savings for investment. This is the paradox of extravagance. If an economy spends at its limit, then there are no savings for investment, and eventually the economy starts to contract due to capital starvation. Stimulating an economy to its maximum, eventually leads to a an economic contraction. And this contraction is going to start occurring during a period of economic boom, just as what is happening now.


Of course, one can argue that there is capital from overseas, which one can use to stimulate the economy. The logic being, that we should borrow more to get ourselves out of debt. If you can't see the flaws in the argument, then you should be the Treasury Secretary. The problem with Anglo influenced economies is that they continue to consume more than they produce, stimulating them will perpetuate the same and drive them further into debt. Over consumption is probably worse state of affairs than under consumption, since there are at least savings to invest in the latter situation.

Furthermore, this state of affairs puts a country's economy at the mercy of the providers of capital. If the Chinese and Arabs were to switch off the spigots; it's all over. If I were a Taiwanese I would be extremely nervous; the U.S. is not exactly going to bite the hand that feeds it. On the other hand, should the U.S default on its debt either explicitly or through inflation, the spigots will be closed for non-political reasons as well and U.S interest rates will go through the roof at a time of high indebtedness.

Oh just as I was about to post this, I noticed that Martin Wolf, of the Financial Times, was thinking along similar lines. His article is worth a read.

The economy needs to be restored to a point where there is approximately a 5-10% personal savings rate. This is what constitutes a healthy economy and economic policy should be geared to that goal. However given the fact that most Anglo economies have the same personal savings chart as above, trying to increase the amount of consumer savings is going to result in a contraction of consumer demand. Business is going to shrink, in the Anglo countries by a lot.
There is a lot of pain coming.
Posted by The Social Pathologist at 9:19 pm 5 comments: