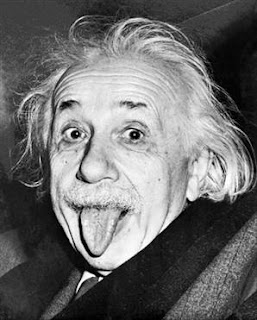 For those who are interested, I just thought that I would try to clarify by what I mean by Stenosophism.

Stenosophism needs to be thought as a form of cognitive provincialism. It is where the mind is limited to grasping the familiar, concrete, proximate and immediate; and it has a hard time stepping outside these boundaries. It does not mean stupid or low IQ, rather it refers to an individuals "breadth" of understanding: their ability to see the context of things.  Stenosophism needs to be thought of as "Narrow IQ", a sort of cognitive aspergism.

IQ for many people is a proxy for intelligence, but nearly all of us know individuals who are of very high IQ and yet failures in their lives. Dorner listed the example of Mozart, a musical genius who was unable to transfer his talents to finance, dying a pauper. Indeed, Mozart is a good example of stenosophism. His enormous intellectual ability seemed to only to apply to the musical sphere of his life, outside that, he really didn't do that well. Another example was Nikola Tesla, a super brilliant physicist/engineer, who ended up dying alone and near penniless in hotel room in New York. Linus Pauling, though a brilliant chemist, was idiotic when it came to Vitamin C and Fluoridation.  And it needs to be remembered that it's not only the high IQ end of the spectrum that has this problem. During the 1930's for example, thousands of otherwise intelligent professional men and women believed that Stalin was some emissary of world peace despite mountains of evidence to the contrary. Bruce Charleton has a good name for these type of people, the clever sillies. Lenin thought them "useful idiots".

The phenomenon of the clever-sillies is easily understood you merge the concepts of IQ and stenosophism. High IQ, with narrow "breadth of view" produces a man who is extraordinarily brilliant in his specialty but a bit of failure outside it. Likewise, a man with moderate IQ but broad contextual perception seems pretty good at all things but he won't be winning any Nobel prizes. In my experience, and I don't have any scientific evidence to back this up, it would appear that "perceptual breadth" peaks somewhere between and IQ of 120 and 130. Note, this does not mean that people with an IQ of 120-130  all have a broad perceptual breadth, rather, the perceptual breath of the human race peaks in that IQ band, and that within that IQ band there is a normal distribution of it: A lot of people with an IQ of 120 will be narrow and a few will be really broad. Above an below this range, the "perceptual breadth" is narrower.

Graphing this ability would yield the following (note, they are drawn for conceptual illustration only and are not exact): 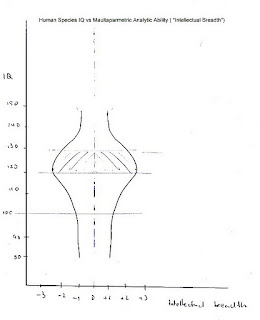 Note, that IQ "width", i.e the ability to do multiparametric analysis  peaks at the 120-130 range, but if we were to look at that population within that rage we would get the following: 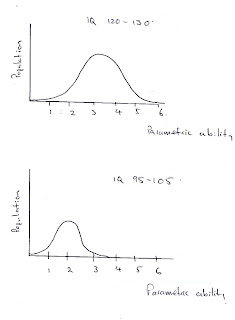 We see that within the 120-30 range , there vast majority of people are below the "4" range and only a very few above. The group of people in the 5-6 range, who are a small number, are humanity's best generalists, since their ability to perform multiparametric analysis is better than their higher IQ superiors.

In my experience, it would appear that at lower IQ's there may be a broader perceptual range than compared to the highest levels, but there is not enough intelligence to tie it all together. However,  over the 130 IQ range, the rapid acceleration in problem solving ability comes at the expense of contextual breadth: It's a trade off, and one with pretty significant implications.

The scientific method, with its reductionist approach--which aims to limit the effect of confounding variables--is profoundly suited to the stenosophistic mind. Perhaps one of the reasons why the scientific method is so powerful, and has become so widespread,  is because of its reductionist approach which is suited to the average stenosophistic mind. Science is easily understood because the variables involved in an experiment are usually "limited".

Specialisation is likewise suited. Specialisation is to knowledge what Adam Smith's division of labour is to production. By getting a man to devote his brain to only a small intellectual field, he is better able to master it due to his limited intellectual breadth. Specialisation and the scientific method "worked" because they were suited to human cognitive limitations with regard to its "breadth": Narrow minds are suited to narrow specialties. Naturally, those of a high IQ were most likely to be the supreme specialists in any particularly field.

But the problem with the divide and conquer approach is that knowledge tends to become fragmented, especially amongst those who are foremost in their field. The end result being, that the specialists, whilst very good in their specialty, aren't that great outside it. This is not itself bad, provided a specialists limitations are recognised, but people tend to think that high IQ people have an understanding and competency across the board, ............and this is not good.

Our society tends to assume that high IQ individuals are high IQ across the board. The opinion of Nobel Prize physicists is given far more weight, let's say with regard to regard to arms reduction, than a professional soldier. It's  because we assume that just because the physicist has a Nobel prize and hence has a higher IQ he is smarter than the soldier and is able to solve "military problems" better.

In the real word, reality is not neatly fragmented like in the academic disciplines, but integrated, and hence, the specialist is frequently unable to see the practical limitations and other conflicting variables that impact upon his knowledge. In other words, he may be giving us useless real world advice. The problem then is of too much specialisation and not enough integration: we need to bring back, to a degree, the legitimacy of the competent generalist; the guy who see's the big picture and who can relate the parts to the whole.

But the problem, is that the best generalists have IQ's of around 120, whilst the specialists have IQ's above that. Guess who progresses up the academic ranks? Guess who gets all the all the important jobs, and as such, influence on social affairs? The conflicting advice that we get in papers and in the media is due to the fact that our system is biased against the "Broad IQ" individuals. No one see's the big picture because the world rewards, and is run, by small picture men.


TURNING and turning in the widening gyre
The falcon cannot hear the falconer;
Things fall apart; the centre cannot hold;
Mere anarchy is loosed upon the world,