There seems to be a movement about which is trying to make May 1st  a commemorative day for victims of Communism. It has my support.  The European Union has marked August 23 (The date of the Ribbentrop-Motolov Pact) as Black Ribbon Day, a day when the victims of totalitarianism are remembered.  Personally,  I think this is an attempt to disguise the evil of communism by hiding it in remembrance of fascist atrocity. Communism, is such a vile malignancy that it deserves a day of it's own; the first of May is quite appropriate.

Today, I want to remember one of those victims. 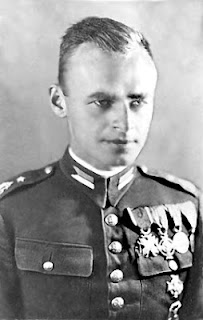 Witold Pilecki, in many ways, embodies the story of Poland in the 20th Century. Caught between the malignancies of Nazi Germany and Communist Russia, his life, like his country, seemed doomed from the outset. Yet Poland, like Pilecki, stands as a testament that the will to life and nobility exists even when all hope is gone.

His Wiki entry can be found here.

It's fascinating to note, that until Pilecki chose to " voluntarily insert" himself into Auschwitz(he also had a wife and two kids), no one actually knew what was going on there. Pilecki's reports back to the Polish Underground were initially met with disbelief.  Seeing the desperateness of the situation, Pilecki actually wanted to organise a rebellion in the camp to liberate the prisoners, but realised that it would be doomed without outside support. The intelligence he obtained was passed to the Polish High Command in exile, who in turn passed it to the Americans and the British, and pressed them to help. They weren't interested.

Pilecki escaped from Auschwitz and then joined up again with the Polish Underground to fight the Germans and then, after they had been beaten, against the Communists. He was eventually caught by the Polish Communists, tried on false charges, brutally tortured and executed. Ironically, his torturers and executioner were communist Jews. Life is stranger than fiction.

He, like many fellow Poles, were cursed soldiers. Men who fought valiantly against the Germans only to die at the hands of the Communists. Unlike the Danes, who yeilded to the Germans after 16 dead, the Poles fought like lions, suffering terrible persecutions, millions dead and hopeless odds.

These truly were the "Best and Brightest."

A photo gallery of his life can be found here.

Posted by The Social Pathologist at 11:37 am 8 comments: