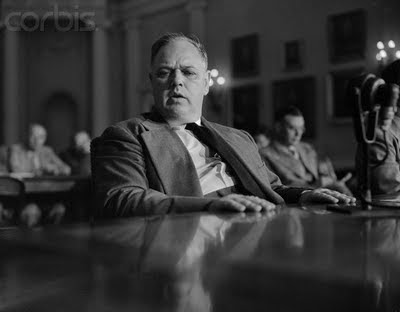 Whittaker Chambers died in 1961, never completing his epilogue to Witness. After his death, his wife and his friend Duncan Norton-Taylor,  rummaged through his correspondence and papers and collated some of them into the book Cold Friday, which I imagine was their attempt to finish what Chambers eventually meant to do. The book received some moderate praise from the right but overall it received a lukewarm reception, and like Chambers, was quickly forgotten.

The rejection of Chambers on the Left is easy to understand, as the Left's ideological position is based on the rejection of God. Of course there are many Christian Leftists, but that is simply to acknowledge that there are many stupid Christians who are unable to follow a train of thought to its logical conclusion. The real worry is why Chambers is effectively ignored by the Right.

It's my opinion that Chambers failure to gain traction on the right stems from the fact that Chambers was preaching a message no one wanted to hear: The West was dying because it turned it's back on God. This of course is an incomprehensible and in fact repugnant message to the majority of men, of both Left and Right, who view the world through the twin lenses of Positivism and moral relativism(i.e uncritical tolerance).  The sad fact of the matter is that the majority of the Right is just as Positivist as the Left, where they differ is on how best to implement their vision of a better society.

Lip service is given to the religious "fundies" of the right, but essentially every social reform that has weakened Western society, divorce, promiscuity, abortion, sexual license, militant feminism, multiculturalism etc, have not been checked, even when Conservatives have achieved power. The fact of the matter is that for many conservatives these things don't matter. All that matters is the economy (materialism) the rest is window dressing. Religious invocations for most Righties are practically irrelevant if not repugnant. The modern Right is part of the disease.

The thrust of Chambers message is that there will be no revival of the West until men turn back to God and Chambers's value lays in showing why this is so. However a  return to traditionalism will not suffice since its inability to react to the technological and social changes of the late 19th and Early 20th Centuries was intrinsic to the turning away from God in those times and in the embracement of ultimately ruinous ideologies.

Whilst Chambers felt that he left Communism to join "the losing side" it appears that he did not loose all hope.  Amongst his papers was found what is presumed to be the forward to the book he never wrote:


Spring has come to us again-a spring that I scarcely expected to see. Twice at night the wild geese have passed over. There may have been three such flights, since one night I dreamed that I saw hundreds flying overhead, so in the way we bear so much without ever quite waking to its meaning, I may have heard these wild geese honking without waking. The first flight, the venturesome, was small and the cries so faint that I was scarcely certain at first that I heard even them. The second flight was much bigger and so loud that I roused up, and I saw my wife already standing, listening, in the moonlight at the window. I said: "You hear the wild geese?" and fell asleep again. So my wife and I learned that, somewhat unaccountably, we had lived into another spring.

I began this book deliberately with spring as the point of resurging life because this is a book, in general, about death-the death of an age and the death of a man and what relationship, if any, the experiences bear to each other.

Chambers felt that the West could survive, but only if it returned to its religious roots, and he was under no illusion of how impossible the task seemed. He certainly offered no solutions or plan. The task then of the modern conservative is then to rebuild the temple which he must first do within himself. As the Master said:


But seek ye first the kingdom of God, and his righteousness; and all these things shall be added unto you.

Posted by The Social Pathologist at 11:49 pm 8 comments: