Modern auto engines are marvelously complex pieces of machinery. Over a century of improvement has resulted in engines that are lighter, more powerful, more fuel efficient and more reliable than their original predecessors. 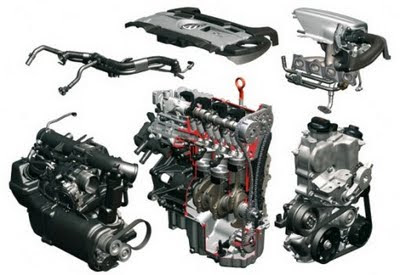 The engine designer has a hard task. He is usually given a design brief which on closer inspection is contradictory. For a given engine capacity, his engine must produce maximal power and yet he is also told to minimise fuel consumption, which is directly related to power output. He is told that the engine must be light and reliable, but in order to improve reliability he must make some of the parts heavier than what is needed. The engine must be cheap and simple to manufacture, but the high temperatures and pressure needed to achieve fuel efficiency mean more expensive alloys and cooling. And so on.

In the end, engine design like most other mutiparametric design, is an exercise in compromise amongst competing independent parameters. Things are a trade off.

Once a multiparametric system has been optimised for a certain state, system integrity is dependent upon the system operating within certain design parameters. Operating mulitparametric systems outside their design parameters may result in loss of system integrity,  reduced system life or suboptimal system performance. Now most robust systems usually allow for some minor variation outside design criteria, but this becomes harder the more complex the system is.

For example and engine may have the following design criteria. (I've made these up)

The system, in order to be viable, has to stick to its rules of operation.

Car engines, for a given class of car, are more similar than different since the parametric constraints placed by by materials science and thermodynamics mean that there are only a limited number of compatible mutiparametric solutions to the engine design problem.

This does not apply just to cars. Cake mixers, bicycles, pens, passenger aircraft, etc. are more alike than different, its because as the state of the art improves and matures, it becomes apparent that there are only a limited number of viable solutions to the design problem. Initial ideas which were promising are found to be impractical from a variety of perspectives.

(There is rumour that the Volkswagen 1.4 TSI engine, a novel solution to engine design requirements, is going to be discontinued because it is too expensive to make. )

Now the point about all this is that society can be considered a multiparametric system, being composed of multiple competing and interacting elements, and as such, society can be looked at from a systems engineering perspective.

It was Jim Kalb's writings that got me thinking about looking at society this way. His battle against modernism is based upon a traditionalist perspective. The argument, as I see it, being that traditional cultures such as Islam and Chinese Confucianism have lasted because they cater towards human beings better than modernism does. After reading this, I asked myself the question, given the stability of Confucian and Islamic society, what sort of rules of operation produce a systemically stable society?

When you look at it from a systems engineering point of view you see that stable and relatively advanced societies seem to operate under a relatively narrow systems of rules; what C.S. Lewis called the "Tao of Life." In fact these rules can be don't actually have to be divinely inspired, rather they are relatively self evident to any man of moderate reflection. Christian writers would have called these operating parameters Natural Law. Anyone who is really interested should have a read of C.S. Lewis's Abolition of Man, where he quotes similar passages from Hindu, Norse, Egyptian, Roman, Jewish, Greek and Chinese texts.

Some of these rules of system operation can be summed up as follows:

The existence of a morality which is independent of the individual.
A belief in objective truth.
Censure of some kind for transgression of the rules.
Benefit of some kind for concordance with them.
Just and fair dealings with others
Consideration of others in our actions.
Preference for our own kind.
Sexual restraint.
Magnanimity.

The fact that these cultures, which lasted for centuries, separated both temporally and spatially should have broad common approaches to their operation suggests that stable complex societies may only be possible if run according to these broad principles. The fact that large scale promiscuity, institutionalised lying and moral relativism have not stood out as organising principles amongst surviving cultures suggest that from a systems perspective, these operating rules may be inimical to system stability. Relatively advanced stable societies may only be possible under a narrow set of system parameters.
Posted by The Social Pathologist at 11:26 pm 5 comments: